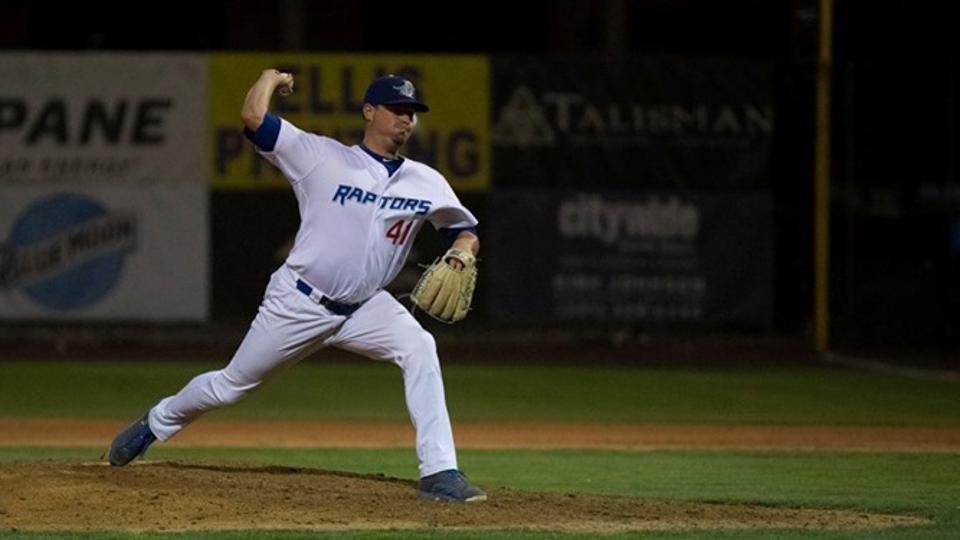 IDAHO FALLS, ID - The Ogden Raptors survived walks and sloppy defensive play in the middle innings Friday night to beat the Idaho Falls Chukars, 5-3, and pull within one win of their second Pioneer League championship in three years.

The Chukars put three runs on the board on only one hit in the third inning to take the lead, but they were held off the scoreboard the rest of the game.

The game-changing play came in the fourth, when three walks loaded the bases for Idaho Falls with no one out after Ogden had gone on the board in the top half. Corey Merrill entered the game and struck out the next three to wrest the momentum away.

The Raptors took that boost and scored three times in the fifth to take the lead, then added their final run in the seventh.

Juan Morillo started for Ogden and retired the first six Chukars before walking a pair to start the third. Idaho Falls' number nine hitter tried to lay down a sacrifice bunt and catcher Ramon Rodriguez fired toward second for a force out. The ball skipped into center field, scoring a run. After a force out, the hosts' first hit of the game loaded the bases. The next ball was grounded toward third, but Sauryn Lao's throw skipped away from Rodriguez as two more came across. Jacob Cantleberry entered and ended the rally by striking out the next two.

In the top of the fourth, Marco Hernandez and Ramon Rodriguez singled to put two on. With two out, Ismael Alcantara doubled to right, scoring Hernandez.

Cantleberry started the fourth but couldn't keep the momentum from ending the third, as lost all three batters he faced after going to full counts before Merrill picked him up.

Andy Pages fell behind, 0-2, to start the fifth before lining a base hit. Zac Ching also was down in the count but worked a walk to put two on. Sauryn Lao's grounder toward slipped under the shortstop's glove to score Pages. Hernandez then lined a hit to load the bases, and a Jimmy Titus smash to center plated Ching on a sacrifice fly to tie the game. Lao also tagged and advanced to third on the deep drive, putting him in position to score the go-ahead run on Jon Littell's groundout.

Lao scored another run in the seventh as he reached second on a dropped fly ball, advanced to third on a groundout and scored as the Chukars' shortstop booted another ground ball.

Merrill worked around a one-out walk and hit batter in the fifth before striking out the side in order in the sixth. He gave way to Mark Mixon, who allowed a leadoff base hit in the seventh and then retired two, and Mitchell Tyranski struck out Idaho Falls' slugging first baseman to end the frame. Tyranski struck out all three batters in the eighth, and Nick Robertson pitched a perfect ninth to finish off the Chukars.

In all Ogden's pitching staff gave up just two hits in the game while striking out 17 - one short of their best in the regular season.

Game Two of the series will be at Lindquist Field at 6:30 PM Saturday. The Raptors need to take that game or the finale on Sunday, if it becomes necessary with an Idaho Falls win Saturday, to win the title.