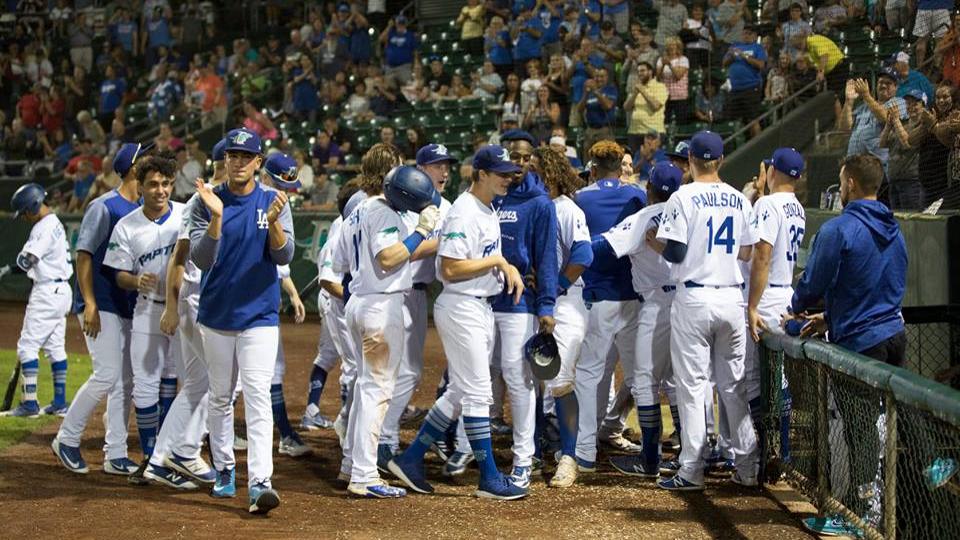 The Raptors were all smiles after Tre Todd's seventh-inning home run, but they fell in the ninth to drop Game One (Kevin Johnson/Eugene Morgan)

With a three-run lead in the top of the ninth, it appeared the Ogden Raptors would cruise to a victory in Game One of the Pioneer League South Division playoff series.

The visiting Grand Junction Rockies, however, didn't give up. They batted around and scored six runs in the ninth to take an 8-5 victory at Lindquist Field and force the Raptors against the wall, needing wins in each of the next two games to keep their season alive.

With Ogden leading, 5-2, into the ninth, Luis Pasen entered and walked the leadoff batter as close pitches didn't quite catch the zone. A passed ball put him at second, followed by a groundout to advance him to third. Another walk put runners on the corners, and a single to left brought in the first run.

The Raptors nearly ended the game on the next two batters, as a grounder to third was stopped on a dive by Kenneth Betancourt, who threw to second for a force out. The Jeremy Arocho throw to first, though, was just late and there were runners at first and third again, now with two out.

With the hosts still up by two runs, a slow ground ball headed toward short. Ronny Brito picked it up and fired on the run to first, but it was off line for an infield hit to bring the Rockies within one at 5-4.

With the tying run on second, Pioneer League MVP Coco Montes lined the first pitch he saw to left field. Daniel Robinson picked it up and threw home in time, but Ramon Rodriguez wasn't able to pick up the bounce as the tying run scored.

After that, a walk loaded the bases and a wild pitch brought the go-ahead run across. Two batters later, a single to center scored two more to cap the inning.

The first six innings of the game were a pitcher's duel. A leadoff single in the top of the first was erased on a double play. In the home half, Robinson drew a walk in front of Dillon Paulson, who launched a two-run homer to excite the crowd.

A single, wild pitch and two groundouts brought in Grand Junction's first run in the second, but Caleb Sampen pitched a scoreless third and handed off to Reza Aleaziz.

Aleaziz stranded a runner in the fourth and turned in a 1-2-3 fifth. In the sixth, Will Golsan hit a leadoff double. Hunter Stovall tried to bunt him to third base, but Aleaziz pounced on the ball and Golsan froze. The throw went to first base for the first out, and Paulson fired across the diamond to retire Golsan, who had belatedly broken for the bag.

In the seventh, the Rockies tied the game with a leadoff hit, wild pitch and one-out single to center.

The Raptors came up in the bottom of the seventh and Brito walked, his third time reaching base. A bouncer to the right side from Andrew Shaps went off the glove of the lunging first baseman for a hit as Brito sprinted around to third base.

Shaps and Brito then executed a double steal, with Brito sneaking his hand across the plate to put Ogden ahead, 3-2. Tre Todd then hammered a drive to left for a two-run homer and three-run advantage.

With the loss, the Raptors are in a must-win position for Game Two, scheduled for 6:30 PM Saturday at Lindquist Field.