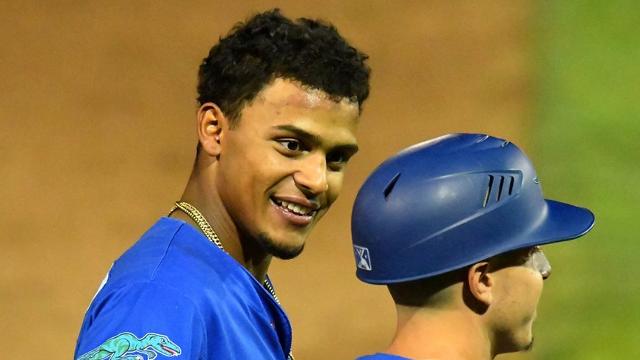 In recent weeks, the Ogden Raptors have mastered the art of winning the final game of a series to avoid a sweep.

For the first time in 2018, however, that magic disappeared and the Raptors suffered a sweep, albeit in a brief two-game affair, at home to the surging Idaho Falls Chukars by dropping the finale, 8-6.

Ogden actually trailed by three entering the eighth and used their Pioneer League-best patience to knot the game at six runs apiece, but the Chukars put up consecutive doubles and a bloop single to break the tie with two runs in the ninth.

Idaho Falls went on the board with three runs in the top of the first. Offerman Collado flipped a single to center after falling behind in the count, 0-2, and Nate Eaton hammered his second home run in as many days to make it 2-0 almost before the fans were settled in their seats. Bubba Starling, on a rehab assignment from Triple-A Omaha, drew a walk and scored on a one-out Jose Caraballo double.

The Raptors drew within a run in the third, when Jeremy Arocho tripled to center with two out and scored on a Daniel Robinson single. Robinson ended up at second base when the ball kicked away from Caraballo, and that allowed him to score on a Matt Cogen base hit.

In the fourth the Chukars put up a run on a sacrifice fly, but Niko Hulsizer answered with his eighth home run of the year, a solo shot, in the home half.

The visitors added runs in the sixth and seventh to go up by three.

Ogden threatened in the sixth and seventh, putting runners in scoring position with no outs in both innings, but they left the bases loaded in each frame without scoring.

With one out in the eighth, Ramon Rodriguez lined a double to right-center, and he moved to third base on a groundout. Jeremy Arocho drew a four-pitch walk to bring up Robinson, who came through again with a base hit to right-center to score Rodriguez. Cogen then walked to load the bases and Dillon Paulson worked the count full before drawing a walk to force in Arocho, bringing the Raptors within one.

Idaho Falls went to their bullpen, and the reliever threw a wild pitch on his first offering to plate Robinson and tie the game. The next pitch was grounded to short to end the inning and strand the remaining two runners, however.

In the ninth, the first two Chukars doubled, with the second driving in the first to break the tie. Three batters later a flare sailed over the shortstop and into left to score the second run. The Raptors went down in order in the bottom of the ninth.

Ogden has two regular-season home games remaining, both against Grand Junction and starting at 6:30 PM on Friday and Saturday.