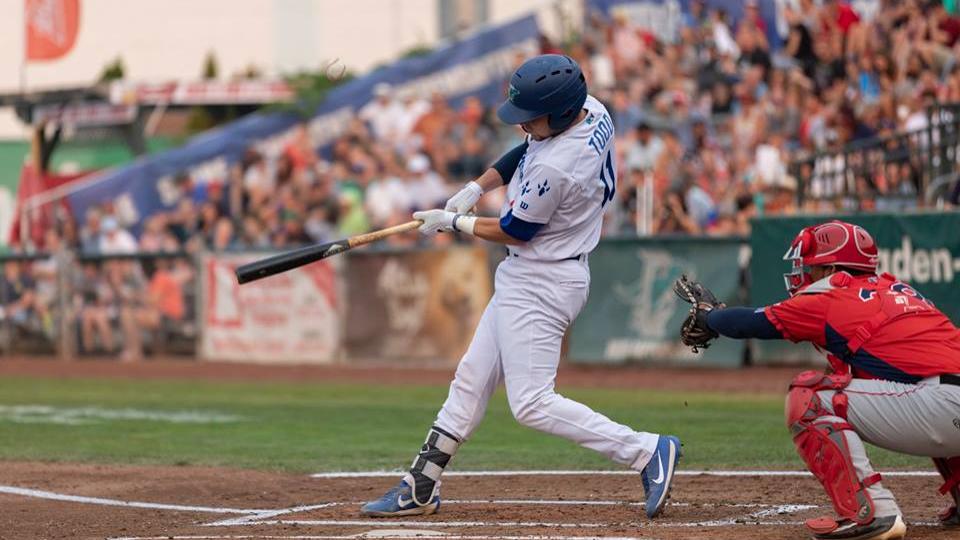 Other than their series with the Orem Owlz, the Ogden Raptors have found big hits hard to come by in the month since the Pioneer League's All-Star break.

Tuesday in Idaho Falls, the Raptors strung together base hits in the seventh inning to tie the game before a triple from Tre Todd completed the comeback for an 11-9 victory.

The Ogden win dropped the host Chukars two games back of Grand Junction with two games to play in the regular season, meaning the Rockies need just one win or Idaho Falls loss to clinch the second half and set up a first-round playoff meeting with the Raptors.

Trailing, 7-3, entering the seventh, Ogden's hitters put up five straight base hits to pull within one run. Moises Perez singled to open the frame, Jeremy Arocho beat out a bunt hit, Daniel Robinson knocked in Perez, Dillon Paulson's broken bat liner to center scored Arocho and Ronny Brito pulled a ball through the left side to plate Robinson.

A fielder's choice retired Paulson at third base for the first out, but after a pitching change Niko Hulsizer walked to load the bases and Jefrey Souffront took ball four to force in the tying run. That brought up Todd, who took the count to 2-2 and then pulled a ball down the first-base line inside the bag and into the right field corner. Chukars right fielder Jose Caraballo was playing in right-center, giving Todd an easy stand up triple to clear the bases and put Ogden up, 10-7.

Throughout the game, Raptors pitchers showed signs of dominance but couldn't put it all together.

Brett de Geus started and struck out the side in order in the first. He also struck out the first batter of the second and ended that frame with a flyout after allowing a two-out single. But in the third he was tagged for four runs on four hits and only recorded one out before exiting.

The Raptors picked up a run with two out in the fourth, as James Outman's deep fly ball was lost in the sky by the center fielder. Outman ended up on third and scored when Hulsizer dented the wall in left with a double.

The Chukars answered that run with one of their own, notching a pair of doubles in the home half to push the lead to 5-1.

In the sixth, Ogden put up two runs without a hit. Brito was hit by a pitch and advanced to second on an errant pickoff throw. A groundout put him on third before Hulsizer's first walk of the day, and a wild pitch brought Brito across as Hulsizer sprinted around to third base. Souffront then drove in Hulsizer with a groundout to pull the visitors within two.

Idaho Falls opened it right back up in the home half, however, with two singles to score runs with two out.

The hosts didn't give up after Ogden took the lead. Consecutive doubles scored a run in the bottom of the seventh, and a single put the potential tying run on base. Reza Aleaziz, though, entered and threw one pitch to get a double play off the bat of Jesus Atencio (who had three hits to that point) to end the frame.

The Raptors picked up their final run in the top of the ninth, with Hulsizer drawing his third walk of the day and stealing second base. With two down, Perez fouled away multiple pitches to set up a double down the left field line, scoring Hulsizer.

It still wasn't over, as the Chukars used a walk and two singled to score a run and put the potential tying run on base again in the bottom of the ninth. Aleaziz bounced back, and for the second time he induced a twin killing from Atencio, this to end the game.

Game three of the series is scheduled for 7:15 Wednesday night.