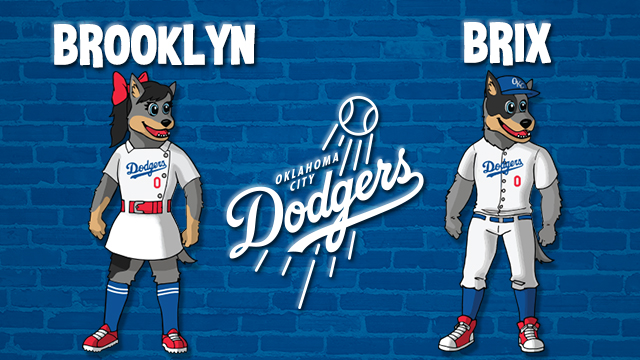 OKLAHOMA CITY - After receiving over 1,000 submissions for new mascot names, and close to 2,000 votes during the finals, the Oklahoma City Dodgers announced their new mascots will be named Brooklyn (female) and Brix (male).

"We had incredible response from all of our fans who wanted to share their input from start to finish," said OKC Dodgers President/General Manager Michael Byrnes. "Once we narrowed down the field, it became pretty evident Brooklyn and Brix were the most popular choices. It's a great combo that not only honors the Dodgers' history, but also places an emphasis on the local community."

Although the identity of the mascots was kept secret during the naming process, the team also released an illustration of what the mascots will look like. Brooklyn and Brix are cattle dogs, with inspiration drawn from the role cattle have played in the state of Oklahoma's history, including Stockyards City and the Chisholm Trail. During cattle drives, cattle dogs assist leading the herd over long stretches of rough terrain. Cattle dogs are full of energy, and are intelligent and playful--all characteristics key to mascots.

When choosing the new mascots, the OKC Dodgers also decided to pay homage to something near and dear to the heart of Los Angeles Dodgers fans all across the world.

"When people think of the Dodgers, they think of Dodger Dogs, of course," Byrnes said. "We think that Brooklyn and Brix are a fun, new twist on that connotation."

The mascots were developed by Alinco Costumes. Alinco has designed hundreds of professional mascots, including Rumble of the Oklahoma City Thunder.

Brooklyn and Brix will make their grand debut during the pre-game festivities April 9 when the Oklahoma City Dodgers start the 2015 season against the Round Rock Express at Chickasaw Bricktown Ballpark. First pitch is scheduled for 7:05 p.m. To purchase tickets to opening weekend, please call (405) 218-1000 or visit okcdodgers.com.