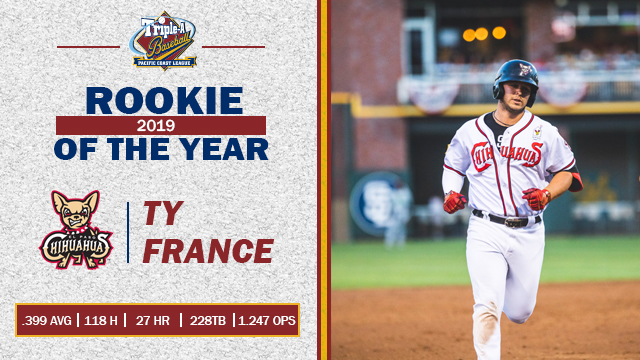 France, who was tabbed by Baseball America as San Diego's No. 28 prospect entering the season, had been the Chihuahuas everyday third baseman prior to his promotion to the Padres. In 76 games with the Chihuahuas, France hit .399 (118-for-296), with 118 hits and 27 home runs. His .399 average would have set a new modern era PCL record (.384, Jose Martinez, Omaha, 2015) and would have been the highest batting average since Ox Eckhardt also hit .399 in 1935, but France did not meet the 2.7 at-bats per team game minimum to qualify. The all-time PCL record is also held by Eckhardt, which he set in 1933 with a .414 batting average.

France adds another accolade to a growing list for his play this season, as the 25-year-old was named both a mid- and postseason All-Star. France, who started at third base for the PCL in the Triple-A All-Star Game, was the All-Star MVP after hitting a solo home run in the PCL's victory over the International League. France was also named PCL Player of the Week twice during the 2019 season (April 21 and June 16).

The Padres 34th round selection of the 2015 draft out of San Diego State University began the season with the Chihuahuas and hit.418 (33-for-79) with nine home runs and 28 RBI in 19 games before making his Major League debut on April 26 against the Washington Nationals. In his only at-bat of the game in his debut, France notched his first Major League hit off Nationals relief pitcher Kyle Barraclough as a pinch-hitter.

In his minor league career, the seventh-year professional has played in 534 career games, hitting .294 (575-for-1957) with 69 home runs and 352 RBI. He has been a mid-season All-Star each of the last three seasons including back-to-back midsummer classic nominations in 2017 and 2018 with the San Antonio Missions, then in the Double-A Texas League.

Since 1998, the PCL's field managers, media representatives and broadcasters have voted for the best first-year Triple-A player. Along with France and Hilliard, a total of 10 players, from eight different teams, received vote(s). France joins the likes of Felix Hernandez (2005), Howie Kendrick (2006), Adam Eaton (2012) and last year's recipient, Josh Fuentes, to have won this award.