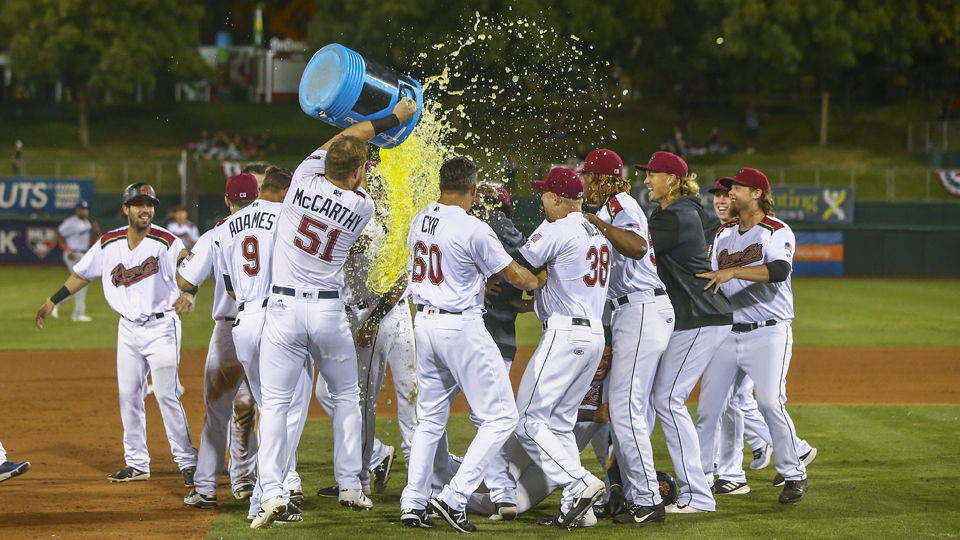 As the Trade Deadline drew closer, the baseball world wondered, "Are the Giants buyers or sellers?"

"It was a crazy few days," Sacramento manager Dave Brundage said. "We weren't sure which way they were going to go at the Trade Deadline."

As the Giants' Triple-A affiliate, the River Cats roster was about to change. The skipper knew that. He just didn't know if they were about to lose key players or gain new ones.

On July 31, the Giants made five trades. But they kept ace and trade rumor favorite Madison Bumgarner as well as their top hitters. San Francisco also recalled three players from Sacramento that day, leading to a pile of transactions for Brundage to sort through.

"We got a couple real nice players in [Mauricio] Dubon and [Jaylin] Davis, and we ended up getting [Dan] Winkler and ended up getting [Joe] McCarthy in a couple trades. And it changed our team; but it changed it for the better. It created opportunity, and some guys took advantage of it," the manager said. "As far as an organization, we came out smelling pretty good with the players that we got."

This was the first Trade Deadline with Farhan Zaidi as the Giants' president of baseball operations. After being the assistant general manager of the A's and GM of the Dodgers, the 42-year-old Canadian took his diplomas from MIT and Berkeley -- as well as his copy of "Moneyball" -- to the Giants on Nov. 6, 2018.

With the new regime came a new philosophy. And not just in the Bay Area.

"It's changed the perspective a little bit as far as him creating opportunities for guys," Brundage said. "I think if you sign with San Francisco or you're coming up in the system, there's a chance. And he's creating those opportunities and he's put it in their court."

Seven farmhands who had been in the Minors for at least five seasons finally made their Major League debuts under Zaidi -- four of them got their starts in other organizations. On top of those debuts, San Francisco recalled Tyler Beede, the club's 2014 first-round pick, who had been struggling over the last few seasons. While Beede's numbers haven't been stellar in the Majors, the Giants have stuck with him most of the season.

As the game changes, Brundage also has noticed the system's emphasis on utility players. Every infielder in the River Cats clubhouse has moved around the dirt and every outfielder has moved around the grass, with a couple super utilitymen playing all over the field. Plus, catcher Ronnie Freeman diversified by pitching a couple innings.

Since joining the Giants on May 13, outfielder Courtney Hawkins has noticed an emphasis on analytics. The 2012 first-rounder spent the first six years of his career with the White Sox before being picked up by the Reds in August 2018 and by the Giants in May.

Hawkins grew up with old-school managers who followed a traditional blueprint. Now he gets daily and weekly analysis from the Giants, featuring the latest metrics and stats.

"Coming to this [system], you've still got that [old-school style], but you also have some of the new-school technology and analytical stuff that actually really helps you if it's done the right way," Hawkins said. "I think they're doing it the right way with what they're presenting to the guys, what they're wanting from guys, and [acknowledging] every guy is different, showing them what their strengths and what their weaknesses are. So I think that's a big advantage.

"This [system] so far is definitely ahead as far as analytical and the information they give you. … It's definitely the most I've ever had in an organization I've been in."

The new analytics, the idea of genuine opportunities in the Majors and the emphasis on versatility -- along with Brundage's managing style, which evolves based on the team's and players' strengths -- has paid off for San Francisco and Sacramento. The Giants went from the third-worst record in the National League in May to a Wild Card contender in August before slipping back in recent weeks.

Meanwhile, the River Cats went from the basement of the Pacific Coast League in 2018 to being league champions -- the Giants' first PCL title since 1977. Reliever Steven Okert, who has spent parts of the last five seasons with Sacramento, could feel the difference.

"This year we've had a good start all the way through. And compared to clubhouses in the past where guys are moping around, they're worried about what their stats look like, you know, silence after losses," he said. "When you're winning, obviously, everyone's playing pretty good, you got music going after the games, everyone's pumped up before the games. I just feel like we're more excited going into each and every game than we have been in the past."

The winning should continue in Sacramento and beyond as Joey Bart and Heliot Ramos, the organization's top two prospects, likely will make their Triple-A debuts in 2020.

"The system, the fan base, the Giants, I know they should be excited. Those are younger guys that are coming up that are going to be something special," said Hawkins, who played with Bart and Ramos this year with Class A Advanced San Jose. "They got a lot of talent and a lot of love for the game. What anybody has seen so far, there's a lot more they should be expecting."

As Bart and Ramos move up to Raley Field next year, the focus won't just be on individual development. While Minor League wins typically haven't been seen as important, Brundage feels there's another new trend in baseball.

"And I felt like that's something that we achieved this year. To go on and win a championship after [42] years really meant an awful lot."

Kelsie Heneghan is a reporter at MiLB.com. Follow her on Twitter @Kelsie_Heneghan. This story was not subject to the approval of the National Association of Professional Baseball Leagues or its clubs.