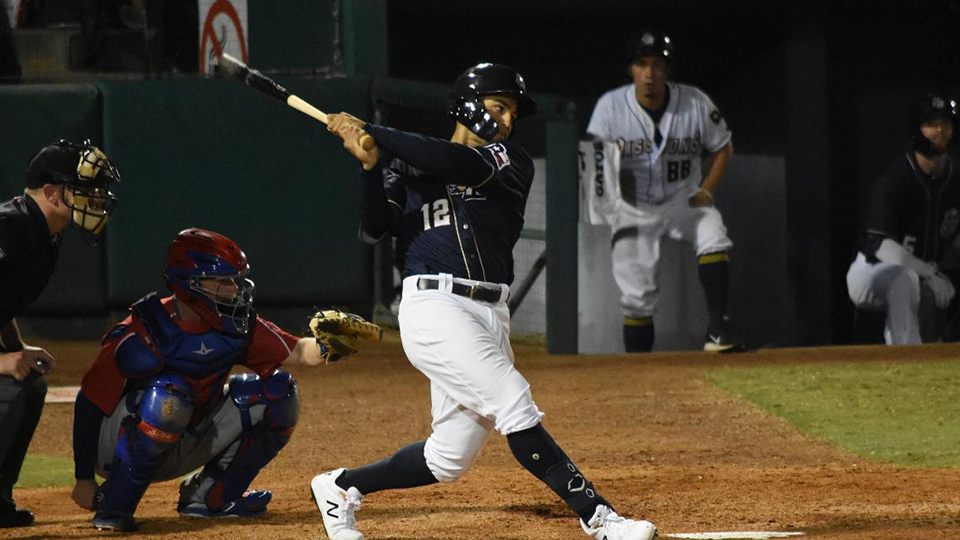 Trent Grisham has been an offensive spark plug since joining Triple-A San Antonio a month ago.

The Brewers' No. 30 prospect extended his home run streak to three games with a go-ahead blast in the eighth inning as the Missions beat Nashville, 6-5, on Tuesday at Nelson Wolff Stadium.

Grisham led off the bottom of the first by dropping a bunt down the third base line for a single. After advancing to second on a soft liner by fifth-ranked Brewers prospect Mauricio Dubon, he scored on a single to left by Nate Orf.

"It's something I've worked on throughout the season," the left-handed-hitting outfielder said. "I saw the third baseman back up on an 0-1 count, so I just dropped down the bunt and, luckily, it worked out."

After he drew a walk in his second plate appearance, Grisham grounded out in the third inning and struck out looking in the sixth.

The Southern League All-Star said the three-day layoff from the Triple-A All-Star break had little effect on him.

"After not seeing live pitching for a few days, my timing was off a little bit," the 22-year-old said. "I just try to stay within myself. But once I got my timing back, I've been seeing a lot of good pitches."

With the game tied, 5-5, Grisham came up in the eighth with the go-ahead run at first. Tuffy Gosewisch was picked off by Miguel Del Pozo (2-3), but the 2015 first-round Draft pick sent the left-hander's 3-2 pitch over the right field fence for his fourth dinger during the streak. It was his 22nd homer of the season and ninth since he was promoted from Double-A Biloxi on June 20.

"I didn't really feel a lot of pressure," Grisham said of his late-innings heroics. "I just wanted to put together a good at-bat and try to get a ball to hit. Luckily for me, it went out."

In his last four games, the Fort Worth, Texas, native is 11-for-18 with four homers and seven RBIs to raise his Triple-A batting average to .314.

Grisham is a .248 hitter over five Minor League seasons, but he's on pace to crack the .300 mark this year. He credited a relaxed approach at the plate, working on his timing in the offeseason and into Spring Training and, most importantly, having fun at the plate and in the outfield.

Brewers No. 8 prospect Lucas Erceg added a two-run homer for the Missions, who improved to 6-0 since the break.

"It's been a lot of fun," Grisham said of the clubhouse during the winning streak. "Everyone's having fun. When you're winning, baseball is always fun."