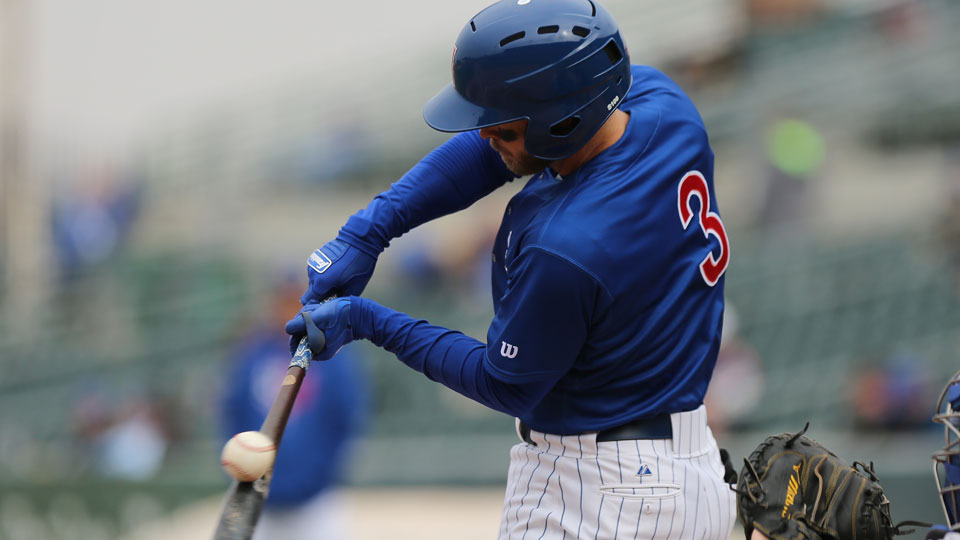 It took 898 professional games, 843 in the Minors, but Mike Freeman finally had a multi-homer night. And he did it in style too.

The 30-year-old infielder smashed three dingers into the night sky at Principal Park off three different pitchers to pace Triple-A Iowa to a 10-3 victory over Omaha. Meanwhile, top Cubs prospect Adbert Alzolay continued to blaze on the mound -- taking another no-hit bid deep into his outing in his third Pacific Coast League start.

"Oh, my God. He was awesome," Alzolay said of Freeman. "Not only the three home runs, but he was working hard in the field too all night. He was making plays everywhere. When you're on the mound and you see a guy working like that and helping you too, you get confident. So when he made a nice catch [at shortstop] in the third and then gave us an early lead, yeah, that definitely gave me confidence."

"That was a first for me, it feels good. We've been scuffling here, so it feels even better to get the win," added Freeman, whose squad snapped an eight-game losing skid. "And Alzolay was lights-out. He was really fun to play behind, and when he's dealing like that, it really takes a lot of pressure off of the offense."

The Clemson product broke the scoreless tie in the third inning with a solo shot to left-center field off Kansas City's No. 23 prospect Andres Machado. In the seventh, he turned around a 3-1 fastball from 18th-ranked Richard Lovelady for another solo blast.

"I'm never trying to hit home runs. I think I just caught the wind blowing out on a good night and I had that going in my favor," Freeman said. "I also got into good hitters' counts, and when they threw me a fastball, I put good swings on it."

In his final at-bat, the 2010 11th-rounder was served another 3-1 fastball, this time from Mike Broadway and sent a moonshot to straightaway center for a three-run roundtripper.

The moment was not lost on his teammates.

"When I got back into the dugout, the guys in there congratulated the guys that were on base, but then they turned and gave me the silent treatment," Freeman said. "But after a little while, everyone came out of it and they gave me congratulations too and we had some laughs. It was a lot of fun."

On the other side of the ball, Alzolay (2-1) was on cruise control. The right-hander brought a no-hitter into the sixth, when Adalberto Mondesi beat out an infield single to short with one out. The native of Venezuela then induced an inning-ending double play and struck out the side on 11 pitches in his final frame. Alzolay finished with two walks and tied his season-high six punchouts over seven scoreless frames.

"I felt like everything worked together for me. I had all of my pitches going. I was able to pound to the zone by moving my fastball around -- left to right and also up and down -- and mix in my changeup and my breaking ball was perfect," said Alzolay, whose heater sits in the mid-90s but can be ramped up to 98 mph when he reaches back.

"I made my pitch on that hit [from Mondesi], he just got the bat on it and he's really fast. The ball got to the shortstop and he made a good throw to first, but it was too late. That's just baseball. After that, I knew I was on a pitch count. I wanted to be out there for as long as possible, so I just thought, 'Get a double play here and get out of this.' In the seventh, I just went right after guys."

In his Iowa debut on April 20, Alzolay also took a no-hit bid into the sixth against Nashville. That was broken up by a leadoff home run by B.J. Boyd. In that start, he did not return to the mound for the seventh.

"I looked at the scoreboard while I was in the dugout [between the fourth and the fifth] and I was like, 'Holy cow, I'm doing it again,'" he said. "But I didn't really let it affect me. When I'm out there, I just want to do my work and help my team.

Cubs No. 13 prospect Mark Zagunis and Taylor Davis also went yard for Iowa. The five long balls were the most in a game for the team since June 14, 2016.