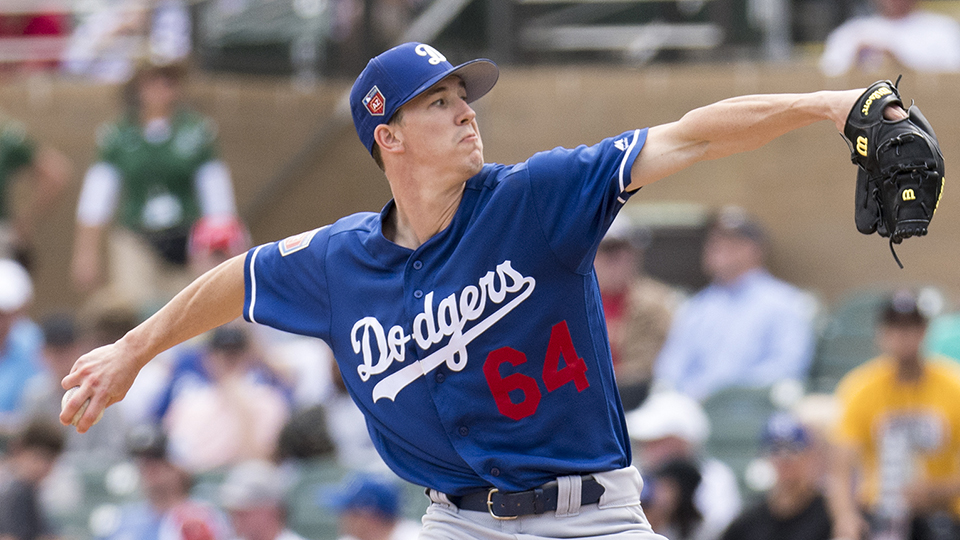 Walker Buehler struck out 12 in 9 1/3 innings out of the bullpen with the Dodgers last year. (Jared Ravich/MiLB.com)

Walker Buehler is going Hollywood, and this time, he's going to start.

The top Dodgers prospect was placed on the club's taxi squad prior to Sunday's game with the Nationals and will be activated in time to make his first Major League start against the Marlins at Dodger Stadium on Monday night. Buehler began 2018 with Triple-A Oklahoma City, where he went 1-0 with a 2.08 ERA and struck out 16 in 13 innings over three starts.

Video: Buehler fans his sixth in a start for Oklahoma City

MLB.com's No. 12 overall prospect made his big league debut last September and went 0-1 with a 7.71 ERA in eight relief appearances. He struck out 12 but struggled with his control, walking eight, over his first 9 1/3 Major League innings.

Drafted 24th overall in 2015, Buehler underwent Tommy John surgery later that summer, delaying his professional debut. The Vanderbilt product posted a 3-3 record with a 3.35 ERA in 28 appearances (19 starts) while striking out 125 batters in 88 2/3 innings between Class A Advanced Rancho Cucamonga, Double-A Tulsa and Oklahoma City last year. Although he's been brought along slowly, Buehler has produced a 3.04 ERA and averaged more than 12 strikeouts per nine innings while holding opposing batters to a .200 average since starting his career in 2016.

"The biggest thing for Walker right now is probably pitch sequencing and understanding that his taste last year in September is a really good opportunity for him to understand how the big leaguers are more advanced than the Minor League guys, and he's not going to be able to overpower them," Dodgers director of player development Brandon Gomes told MiLB.com last month. "It's much more about refining his craft and understanding how dynamic he can actually be with the weapons he has -- identifying and finding out how to break down a lineup and navigate big leagues hitters a second and third time through rather than relying on pure stuff. But he's incredible. He's a great worker, a great kid, so we're fully confident that he can do it and very quickly."

The Lexington, Kentucky native surrendered one hit and fanned seven in four scoreless innings during Spring Training. He also left a favorable impression on the big league staff, who saw growth during his cameo last season.

"I think it's more validating what we already know about Walker," Dodgers manager Dave Roberts said in March. "What he went through in September was a learning experience. He's a piece that we're looking forward to and counting on. It's not being tempted. We have a plan in place and feel good about it and just knowing he's going to be a part of it."

In three starts with Oklahoma City this season, Buehler had exceeded 80 pitches and completed five innings one time. The right-hander surrendered two runs -- one earned -- on three hits and two walks with five strikeouts in four frames against New Orleans in his last start on April 16.