Marte stings, gets stung for Bees

Infielder contributes at plate, gets injured on final play of win 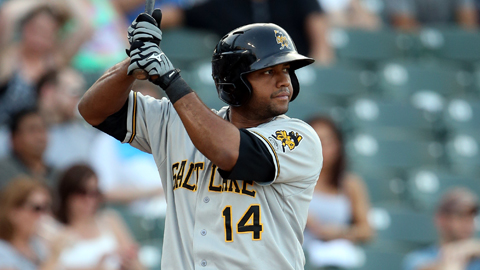 Not every walk-off win produces a boisterous over-the-top celebration.

With the bases loaded in the ninth inning, Scott Cousins hit a fly ball to shallow center field. Andy Marte tagged up and charged home as Brian Bixler fired the ball to catcher Francisco Pena. Marte slid head first around Pena and stretched his left arm out, touching the plate ahead of the tag.

Marte then rolled over in obvious pain, stopping his teammates' celebration just as suddenly as it started.

"He did whatever it took to get that run across," Bees manager Keith Johnson said. "He did one of the faux pas of baseball, sliding into home plate head first, but he'd do it again to help us win."

The ending marred an otherwise outstanding night for Marte, who went 4-for-5 with a solo home run in the fifth inning that tied the game, 3-3.

"His experience speaks for itself," Johnson said. "For a guy that has done as well as he has and had to go to independent league baseball and then come back, he's handled himself with class and professionalism."

The tie lasted until the eighth when Salt Lake's Tommy Field lined an RBI single to center to score Cousins.

Las Vegas came right back with two outs in the ninth. Jamie Hoffmann singled and then crossed the plate on Pena's pinch-hit double to left-center. The Bees then loaded the bases on a leadoff single by Marte and two intentional walks to set up the decisive play.

"It's been pretty intense," Johnson said. "Nothing's over 'til it's over. We've still got our hands full. We know they're going to come out and play hard."

The Storm Chasers rallied for five runs in the sixth inning to take a 2-0 lead in their best-of-5 semifinal. Irving Falu smacked a two-RBI double and Gorkys Hernandez added a run-scoring two-bagger.

No. 2 Astros prospect Jonathan Singleton blasted a towering three-run homer into the upper deck in right field in the fourth for the RedHawks. Game 3 of the series will be at 8:05 p.m. ET on Friday. Gameday box score »

Chris Jackson is a contributor to MiLB.com. This story was not subject to the approval of the National Association of Professional Baseball Leagues or its clubs.