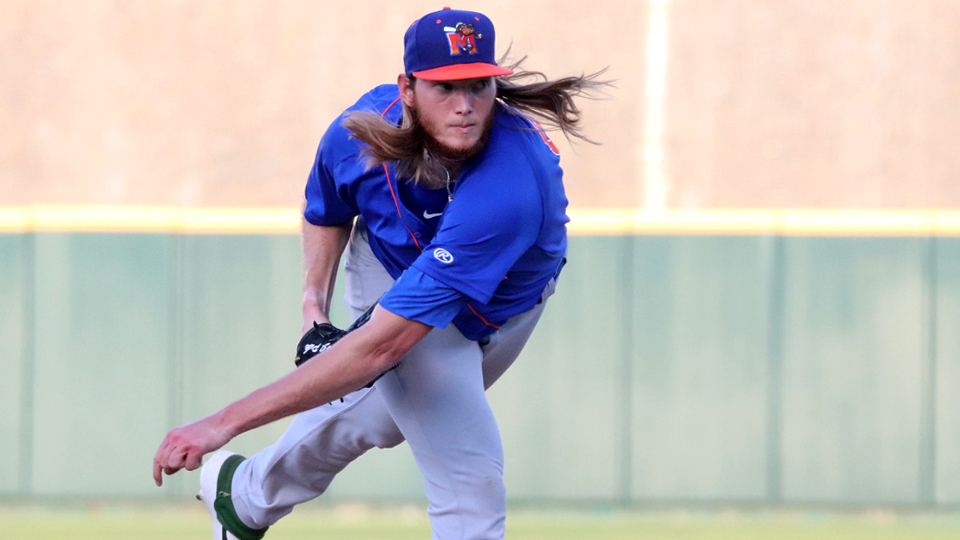 A.J. Puk struck out 13 batters in 8 1/3 innings during his most recent stint with Double-A Midland. (Joshua Tjiong/MiLB.com)

A.J. Puk's path from Tommy John surgery to the Major Leagues is taking another step forward -- to the Pacific Coast League.

The A's promoted MLB.com's No. 34 overall prospect from Double-A Midland to Triple-A Las Vegas, the club made official Tuesday.

Puk is recovering after elbow surgery in April 2018 forced him to miss the entire season. He returned to a Minor League mound in June with Class A Advanced Stockton, where he made three two-inning starts. He has pitched almost exclusively out of the bullpen with Midland since his return to the RockHounds on June 28. Making six appearances for the Texas League club, the 24-year-old left-hander struck out 13 and allowed four earned runs on nine hits and three walks over 8 1/3 innings. He last pitched Friday at Tulsa, giving up a solo homer and striking out one in one inning. He threw 10 pitches, nine of which were strikes.

In the limited stints, Puk's velocity seems to have returned. He has thrown in the mid-to-upper-90s, touching as high as 98, in his second trip to Double-A. The 6-foot-7 hurler has earned strong grades for his plus slider and above-average changeup, though he did struggle with his control earlier this season. He did not, however, issue a free pass in his last three appearances for Midland, totaling five innings.

This move up the A's ladder could prime Puk for a Major League debut later this season. The A's entered Tuesday with a 57-44 record and a one-game lead over the Rays for the second American League Wild Card spot. If Puk can thrive with the new Triple-A ball in the hitter-friendly PCL, he could be in line for a call-up.

It's something that's been on the southpaw's mind as he works his way back from Tommy John surgery.

"The motivation is always in me," he told MiLB.com's Katie Woo earlier this month. "Everyone wants to play in the Major Leagues and have a career there, so that's what you think about every day.

"Right now, I'm worrying about each day, about my recovery and being able to go out on the mound and execute my pitches. That's the biggest thing for me right now, is getting used to that competition. Once that happens and everything comes together, we'll see. There's half a season left, so we'll see what happens."

All three of the A's top prospects have dealt with injuries this season. No. 1 Jesus Luzardo hasn't pitched in a Minor League game since July 2 with a lat strain while No. 3 Sean Murphy is currently rehabbing in the Arizona League after undergoing surgery for a torn meniscus in the first half. Puk takes over from No. 8 Jorge Mateo as the top-ranked A's prospect on the Las Vegas roster.