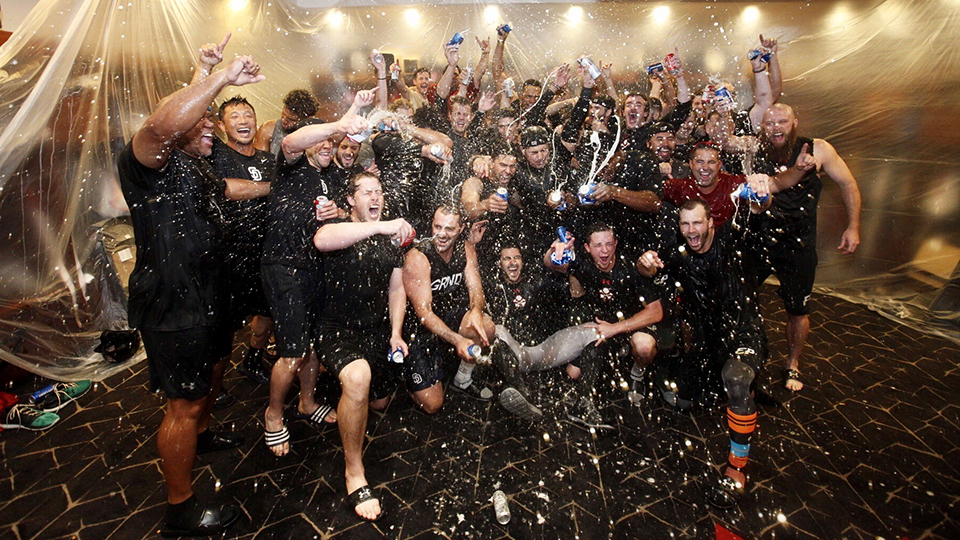 The Chihuahuas celebrate after advancing to the PCL Championship Series for the second year in a row. (El Paso Chihuahuas)

After clinching a division title on the next-to-last day of the regular season, the El Paso Chihuahuas made it a little bit easier on themselves in the Pacific Coast League semifinals.

And they did it with help from a familiar face.

Hunter Renfroe hit a go-ahead double in the eighth inning Friday as the Chihuahuas rallied for a 7-6 victory over Reno and a sweep of the best-of-5 semifinals at Southwest University Park. Tony Cruz homered and drove in four runs to send El Paso back to the Championship Series.

"I've been talking about this club the same way all season," Chihuahuas manager Rod Barajas said. "All year, we were steady. We never got too high and never got too low. Yeah, we didn't go on a great streak, but we didn't have any bad stretches, either. We always felt that we'd put it all together at some point and take off from there, and it happened at the right time.

"We continued with our plan and approach. We kept working and trusted in ourselves that we'd figure it out. When you have faith in each other like these guys do, good things tend to happen."

El Paso fell behind, 3-0, and trailed, 4-2, in the seventh, but Diego Goris singled and Dusty Coleman walked with one out before Cruz tied it with a two-run double to left field. With the score still even in the eighth, Rafael Ortega drew a one-out walkand Renfroe -- who hit .509 with 18 RBIs in 14 games after his return from the Majors on Aug. 19 -- doubled to left to give El Paso a 5-4 lead. Goris' RBI single and an error on shortstop Jack Reinheimer produced two insurance runs for the Chihuahuas.

"When guys come back down from the Majors, they can go in two directions," said Barajas, a former big league catcher. "They can sulk and feel sorry for themselves or they can go out, compete and try and get better every day. Hunter came down here with a smile on his face, ready to play baseball. He was a huge part of our success last year, so he's tasted this before. He knows how to go about his business and he's been a mentor of sorts to some of the guys who haven't been through it.

"In the eighth, [Reno] was playing a no-doubles defense and he still managed to reach second. That's how hard he hit it. He's got a contagious personality and energy and came here ready to work and ready to help this ballclub."

Barajas' club won eight of its last 10 games and clinched their third straight Pacific Southern Division crown on the penultimate day of the season. Last year's team followed a similar path on its way to the franchise's first-ever PCL championship.

"We showed tremendous fight the last month of the season," Barajas said. "We just have a great group of guys who want to compete and are excited about what's going on. No one is looking ahead to [going up to] the Majors or to going home. They all want to win a championship.

"I think about our team last year and what my approach was with them -- it's pretty much the same. They did it the right way and I put my trust in them. We have a pretty similar group this season. I don't have to worry about anyone just going through the motions. They want to go out and win baseball games. It's been a tremendous luxury these last two years and I've been blessed to manage guys like this."

Cruz hammered a two-run homer to left-center field in the third to cut into El Paso's 3-0 deficit.

PCL MVP Christian Walker homered for the second straight game and drove in four runs for Reno. The D-backs' No. 27 prospect hit .364 with a pair of long balls and five RBIs in the series.

Chris Colabello had four hits and drove in five runs as the Sky Sox overcame an early five-run deficit, then withstood a late Redbirds rally to take a 2-1 lead in the other semifinal. Cardinals No. 4 prospect Tyler O'Neill homered for the second time in the series and Nick Martini collected three RBIs for Memphis. Gameday box score