Giants prospect back in bigs after dominant run with River Cats 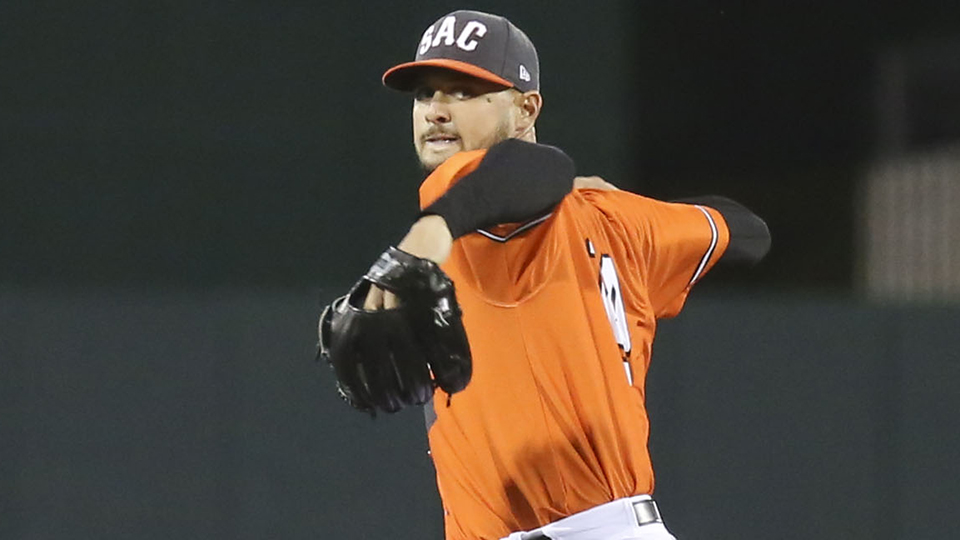 Tyler Beede posted a 1.99 ERA over five Triple-A starts prior to his callup on May 9. (Kaylee Creevan/Sacramento River Cats)

The explosion of offense in Triple-A has been well documented this season.

Collectively, Pacific Coast League teams had a 5.25 ERA through Saturday and had allowed 804 home runs through 576 games, while the International League has seen its teams post a 4.88 ERA and 555 home runs in 474 games.

Much has been made of the change in the baseballs themselves, which are now the same as those used at the Major League level. Hitters have taken advantage and pitchers have found themselves struggling to keep up, an almost full reversal of how things are going in the Majors over the last few seasons.

The outliers, then, are those pitchers who've still found success at Triple-A. Before his recent callup by the San Francisco Giants, right-hander Tyler Beede had posted a 1.99 ERA in five starts with Sacramento, which has a team ERA of 4.66, below the league average.

"I think a lot of it plays into the ballparks we've pitched in," said Beede, the Giants' No. 23-ranked prospect. "Obviously, Sacramento plays a little bit more fair than other ballparks. We've played in Albuquerque, Salt Lake and Vegas, but Tacoma has been decent. I just think for the most part, as cliché as it sounds, the starting staff and the bullpen, too, we just have to build off each other.

"When [Andrew] Suarez was going out there and putting up a quality start, for me, I wanted to go out and do something similar and build off of him. Just watch what he was doing, even though he's a lefty. I think we're just building off each other very well."

"We're doing a good job of listening to our catchers as well and understanding what these hitters are trying to do," he said. "Obviously, other teams are trying to do that [too]. I think it just comes down to executing pitches. I think as a staff we've been able to execute more pitches of late and build off each other."

Beede acknowledged the change in the ball has hurt ERAs around the league, though he also sees a silver lining with more and more Major League clubs relying on a constant stream of pitchers cycled between their staffs and Triple-A rosters.

"It's certainly a big reason why the ball is flying a little bit more," he said. "It's tightly wound, it's spinning more and it's going to go further, especially here in the PCL. I think for a pitcher it's great, because guys are going up and down, [so] to have the same ball, to have the same movement on your pitches, to have the consistency of what you're throwing be the same, it's huge for us to be able to know what we're throwing and to make things effective.

"The ball is a huge factor. From a negative standpoint, the ball is going further, hit harder, but for us it's spinning more. There's positives there."

If pitchers can take a step back and focus on those positive aspects to the new baseballs, it can help them build up their confidence again, much like Beede did en route to pitching in San Francisco.

Jazzing it up: The pitcher adjusting the best to life in the more explosive PCL is Marlins No. 18 prospect Zac Gallen. The right-hander is 5-0 with a 1.14 ERA in seven starts with New Orleans, striking out 55 and allowing just eight walks in 47 1/3 innings.

No longer in reserve: Cardinals No. 24 prospect Jake Woodford is also finding success in the league this season. The right-hander is 2-0 with a 2.04 ERA in seven starts, despite allowing 21 walks in 39 2/3 innings.

Survival mode: On the even more hitter-friendly side of the league, Fresno right-hander Kyle McGowin is holding his own. The Nationals' No. 30 prospect is 4-2 with a 4.32 ERA and 50 strikeouts in 41 2/3 innings.

Chris Jackson is a contributor to MiLB.com. This story was not subject to the approval of the National Association of Professional Baseball Leagues or its clubs.