Padres No. 3 prospect showing off plenty of power at Triple-A El Paso 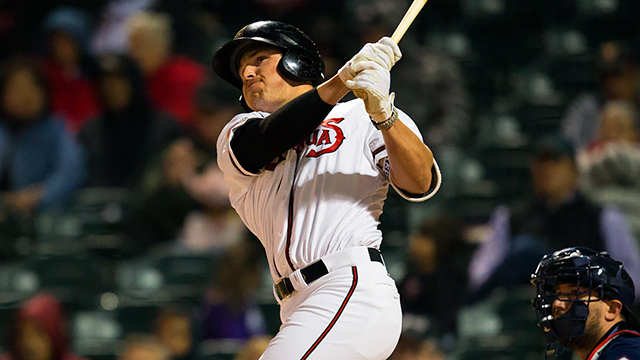 Now a couple of Triple-A El Paso outfielders are getting into the action as the Slash Brothers. Well, their club's social media team is getting them into the name game at least. Padres No. 3 prospect Hunter Renfroe and No. 22 Alex Dickerson are the nicknamed sluggers in El Paso's lineup and have made the Chihuahuas outfield perhaps the best in Triple-A.

"I had no idea," Renfroe said of the moniker. "I guess since we hit three-four in the lineup, we form a pretty good partnership. He gets the job done in front of me, and I try to follow up right behind him with another hit. We mesh really well. Lefties, righties, we have the same approach with some power. It's pick your poison -- me or him."

Dickerson, a lefty, leads the Minors with a .400 average, .659 slugging percentage and 1.100 OPS and just had a 29-game hitting streak come to an end Wednesday. Renfroe has been no slouch either with a .325/.347/.617 line, 12 homers and 39 RBIs in 50 games. After doubling three times Thursday night, the 24-year-old leads the Minors with 34 extra-base hits and ranks sixth in slugging percentage. As the only Slash Brother not yet to make his Major League debut -- Dickerson has gone 4-for-18 (.222) in 19 games with the Padres over the last two seasons -- Renfroe's production has those in San Diego particularly excited for what could come.

Taken out of Mississippi State as the 13th overall pick in the 2013 Draft, Renfroe has always had a reputation as a potential big-time slugger. He was MLB.com's No. 48 overall prospect entering the 2015 season but saw his stock slip after what was at times a rough assignment at Double-A San Antonio. Exactly one year ago, he was .225/.283/.324 after June 2 and had only two homers in 173 at-bats. He would eventually heat up -- hitting .333 with six homers and a .947 OPS in July -- before a promotion to the Pacific Coast League in August, but his .259/.313/.425 line resulted in a 103 wRC+ that, though still slightly above average, didn't quite match up with his potential as a top prospect. As such, he's now considered the No. 86 prospect in the game.

Renfroe doesn't quite see himself any differently today than he did during the tough times with the Missions.

There is something to Renfroe's claims. His BABIP at San Antonio was .316, which is typically above average but isn't quite in line with his career BABIP of .330. Players who can make contact as hard as Renfroe typically have high BABIP's because they make it harder on defenses to catch up to balls in play. A BABIP lower than one's career average sometimes points to bad luck, as Renfroe indicates, although it can also mean fewer hard-hit balls. Both may have been the case, but it's worth noting that the outfielder's .166 isolated slugging percentage was the second-lowest of his career.

Indeed, if you watch the film, you can see that Renfroe has closed his stance a bit to be more in line and has taken away a small toe tap for a more pronounced leg kick to begin his swing. From 2015:

From earlier this week:

"The leg kick comes and goes really," Renfroe said of the changes. "I was more of a toe-tap guy last year because I had always been that way through college, but now I've gone to put my leg up and down, just to get me in rhythm. Sometimes I do, sometimes I don't, though. It depends on what kind of rhythm I can get into, how hard the pitcher is throwing, a bunch of different stuff, but it's more of my game than it used to be."

Perhaps the biggest change for Renfroe has been his ability to make considerably more contact in 2016 than in years past. A slugger who at times had an all-or-nothing approach leading to struggles with breaking stuff on the outer half, the Mississippi native has struck out in only 37 of his 216 plate appearances this season. That's a strikeout rate of 17.1 percent, a drop from 23.7 percent at El Paso and San Antonio in 2015 and his career rate of 23.1 percent. By still maintaining and even building on his power with a .283 ISO (fifth-best in Triple-A) while making more contact, Renfroe has been able to improve his numbers across the board. To wit, his BABIP stands at .350, and his .325 batting average would easily be the highest of his career, if he can maintain it.

"It just comes down to not missing pitches," Renfroe said of his fewer strikeouts. "Not missing those first two strikes or pitches right down the middle that you shouldn't miss at any point, really. Any time you can hit those, it contributes a lot to your game, and it's helped me with some of my power, I think.... Maybe it's not swinging as hard here and there or definitely not swinging at those curveballs in the dirt anymore. I've put a lot of time in, in the cage and in batting practice, to get this all right."

The numbers back up the approach. In the 84 at-bats in which Renfroe has fallen behind in the count this season, he's still hitting .310 with four homers and an .857 OPS. In 150 at-bats last season at San Antonio in the same circumstances, he hit just .213 with five homers and a .582 OPS.

Fans seem to be taking notice as well. The first Triple-A All-Star ballot update came out Thursday afternoon with Renfroe and Dickerson standing in the second and third spots, respectively. A case could also be made for Chihuahuas center fielder and top Padres prospect Manuel Margot, who is tied for the PCL lead with 16 steals and provides plus defense in a premium position. The hope, of course, is that Renfroe's play puts him in position for a move to San Diego, but he'll take whatever accolades he can get.

"I think it's kind of cool," he said of a possible All-Star spot. "It's what we expect as a team here and as players. You always want to be a starting player in the All-Star Game, wherever you are, and want to accomplish what you can to get there. Ultimately, you want to make it to the big leagues, but that could be just another step on the road to the big leagues -- win, be part of the All-Star Game, help the team get to the playoffs. It's all on the list."