No shrinkage in Cyclones' annual tribute to show about nothing 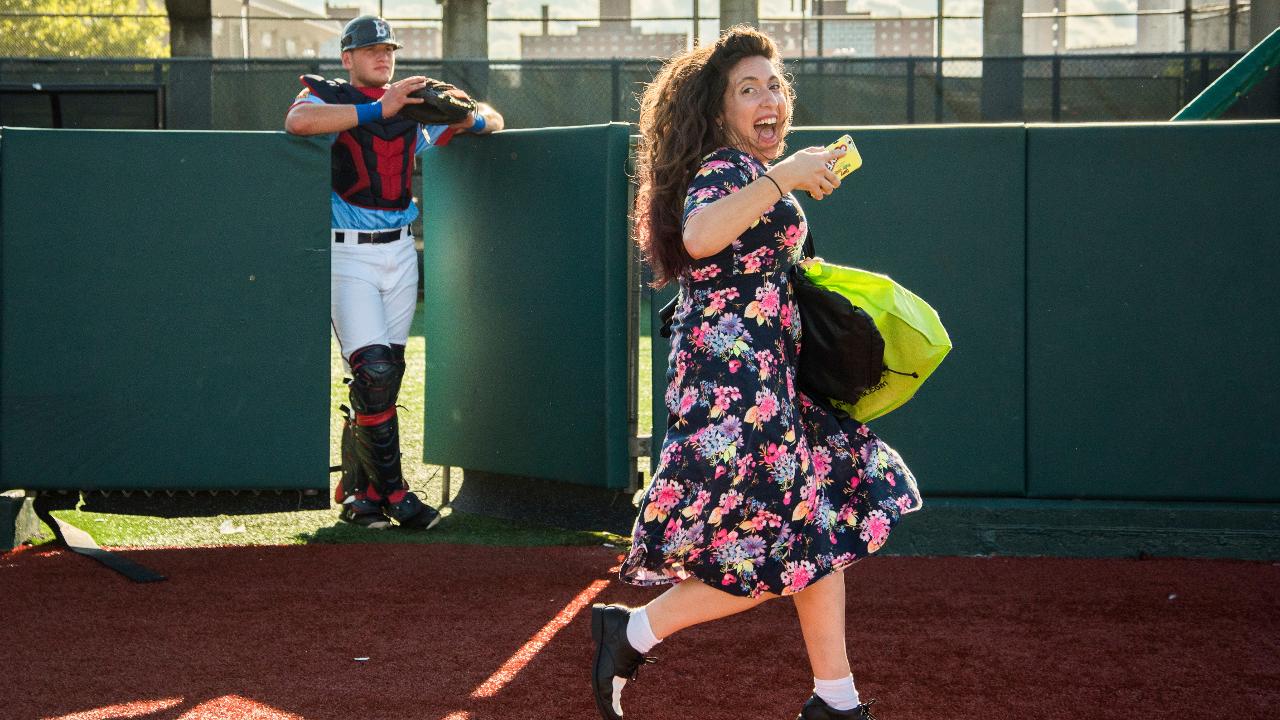 An Elaine Benes look-alike did '"the little kicks" at Brooklyn's MCU Park during the team's annual "Seinfeld" Night. (Brooklyn Cyclones)

It was a show about nothing, but the Brooklyn Cyclones have gotten an awful lot out of it. Namely, they've built a love for its memorable moments into one of the most successful annual theme nights in all of professional baseball, or any sport, for that matter.

The Class A Short Season affiliate of the Mets held its sixth annual "Seinfeld" Night on July 13, with the actors who played legendary characters Lloyd Braun and Bizarro Jerry in attendance as the team suited up as the Brooklyn Marble Rye. The one-game rebrand was a reference to a seventh-season episode in which the title character attempts to help his friend George plant a stolen loaf in a third-story apartment, but the Cyclones' tributes to the iconic '90s sitcom didn't stop there.

Each of the 7,302 fans who showed up to see Brooklyn's 3-1 win over West Virginia received a Fusilli Jerry figurine, a few got the chance to compete in between-innings "Seinfeld"-related games and many stayed to witness the annual postgame Elaine dance contest.

"It sort of has become a 'Seinfeld' convention with a baseball game in the background," said Cyclones director of communications Billy Harner, who's worked for the team since 2011. "People come in costume and people come as much -- if not more -- for the contests than the actual baseball."

During the team's planning meetings prior to the 2014 season, Harner and team staff looked at various anniversaries that would come up during the year. They saw that the 25th anniversary of the first episode of "Seinfeld" airing was coming up, so they thought a theme night about the show could be a fun idea.

The Cyclones became the Marble Rye for one night. (Gordon Donovan/MiLB.com)

"Being in New York, 'Seinfeld' is basically like a religion here," Harner said. "People speak in 'Seinfeld' references and don't even blink an eye because everyone understands it."

For that first "Seinfeld" Night, the team worked with Mets legend Keith Hernandez to give out a Magic Loogie bobblehead, and Harner went on popular sports talk radio station WFAN the day before the event to promote the unique theme. By the time Harner woke up the next morning, his email inbox was flooded with requests tied to the event, and he received more text messages than he could count.

"We figured out it was going to be bigger than anticipated," Harner said. "The guy first in line came in from Winnipeg and slept in his car in the parking lot."

On July 5, 2014, Larry Thomas, the actor who played the legendary Soup Nazi, was the headlining attraction for the first ever Cyclones "Seinfeld" Night as 8,241 fans from 26 states and six countries watched Brooklyn lose, 18-2 to the Aberdeen IronBirds, with David Hess (now of the Baltimore Orioles) throwing two scoreless innings of relief to earn the win.

Despite the lopsided defeat for the home team, Harner remembers that nearly everyone remained at the ballpark throughout the game.

"Nobody left, because everyone wanted to see the Elaine dancing finals that we have after the last out," he said. "We did 'an everybody runs the bases, but Jerry gets a head start.' So people come way more for the other stuff, and sometimes it sort of feels like baseball gets in the way, which is pretty amazing."

Over 200 credentialed media members were in attendance, and the reaction and feedback were so positive that Harner and the Cyclones knew they had something special.

"We realized that this is something we're going to have to keep carrying on," Harner said, "and something that's become a phenomenon."

Now every year when the Cyclones' schedule comes out, people ask the team when "Seinfeld" Night is just as often as they inquire about Opening Night. Harner spoke with someone after Saturday's game who plans his annual family summer vacation around Brooklyn's "Seinfeld" Night.

"They travel up from Pennsylvania to come here, and their first stop is the Cyclones game and then they continue on their way," Harner said. "That was kind of mind-blowing to me."

On Saturday, Harner estimated that 5,000 fans stayed 15 minutes after the game to watch, in his words, "10 women dance terribly and make fools of themselves."

Only "Seinfeld" Night allows fans to show off their rye-catching skills. (Brooklyn Cyclones)

And that level of excitement and engagement is why "Seinfeld" Night has become one of the most successful themed promotions in the country.

"This is a monster in terms of promotions," Harner said. "'Seinfeld' has been our home run every year, and something that we're incredibly proud of as an organization."

With more than 30 years gone now since Seinfeld's pilot premiere, fewer and fewer Cyclones staffers and players are old enough to remember the show, which causes some puzzled looks when the team is asked to don hats with a logo featuring an animated loaf of cake decked out in aviator sunglasses.

"They're definitely confused," Harner said. "They must think I'm a lunatic when I'm walking in with these hats and these jerseys."

In 2014, the Cyclones had their players wear puffy shirts during batting practice. On the road trip before that "Seinfeld" Night, Harner gave the team a DVD of the puffy shirt episode, the Soup Nazi episode and the 'yada yada yada' episode so players would at least have some clue.

"The guys themselves don't know, but their dads do," Harner said. "So that helps me, because their dads get excited and are telling them, 'Make sure you get me a bobblehead,' or 'Make sure you meet this guy and take a picture with him.'"

And even though the players may not know why "Seinfeld" Night is such a big deal every year, they still appreciate the energy in the ballpark when they run onto the field.

"It's such a different day here, in terms of every seat is filled and everyone is into everything that's going on," Harner said. "It's a different crowd and it's fun for people who don't even know anything about the show."

The secret to any successful annual promotional night is keeping a theme fresh and interesting. By bringing in different actors who played assorted characters from various parts of the "Seinfeld" universe every year, the Cyclones keep fans always wanting more.

Competitors in one in-game contest had more than a square to spare. (Brooklyn Cyclones)

"The biggest thing we've been able to do is tie in the ancillary characters, the secondary characters from the show, and been able to get them to come here," Harner said, "because there are so many great characters on the show outside the big four."

In 2015, Brooklyn brought in John O'Hurley, who played J. Peterman, followed by Steve Hytner, who played Kenny Bania, in 2016. Phil Morris, who played Kramer's lawyer Jackie Chiles, was the guest in 2017, and last year Jeremiah Birkett, who played marathon runner Jean-Paul, was the guest. For Jean-Paul, the Cyclones hosted a pregame half-kilometer race, which was basically just a lap around the field.

"We called it 'The Mr. Bevilaqua Fun Run,'" Harner said, referring to a character based on Jerry Seinfeld's real-life high school gym teacher. "Mr. Bevilaqua is a real person who lives out in Massapequa [on Long Island], so we were able to track him down, and he came out and was a starter for the race."

As Harner sees it, using secondary characters to tap into the energy of hardcore "Seinfeld" fans continues to bring people in because devotees have a wide range of favorite episodes or moments from the show. On Saturday, Matt McCoy's Lloyd Braun was a huge hit, even though the character only appeared in a couple of episodes.

"The guy's walking around the concourse," Harner said, "and every six feet he's got somebody screaming 'Serenity now!' at him. People get into it. People love it."

Planning for the event has become a 365-day brainstorming session, with Cyclones staffers watching the show throughout the year randomly coming up with concepts that the team could incorporate in the next "Seinfeld" Night. Even the vice president of the team pitches ideas.

"People see things and think it would be funny," Harner said. "And then we come up with some kind of concept and polish it into something we can do in a 90-second gap in between innings or a little bit longer pregame."

"Seinfeld" Night has become a staple across the Minor Leagues, with Triple-A Lehigh Valley hosting Thomas (the Soup Nazi actor) last month for their 'Seinfeld' Tribute Night. In May, the Class A Charleston RiverDogs based a whole promo -- Moops Night -- on one gag. The Class A Advanced Potomac Nationals have held Halfway to Festivus Night, an Ode to George Costanza Night and a Cosmo Kramer Night. In the big leagues, the Mets brought Jerry Seinfeld himself to Citi Field on July 5.

"We're all in the same boat," Harner said, "trying to make things entertaining for people. It's awesome to see other teams do it. Maybe we can learn some things from other places. The more the merrier."

Less than a week after their 2019 "Seinfeld" Night, the Cyclones already have some ideas in store for next year's edition.

"You can feel the energy in the ballpark," Harner said. "Even though it's a ton of work and a ton of stuff goes into it for everybody, it's crazy to have so many people here. When we see the rewards of it, it's great for everyone."