Palm Beach fireballer Sam Tuivailala off to a hot start 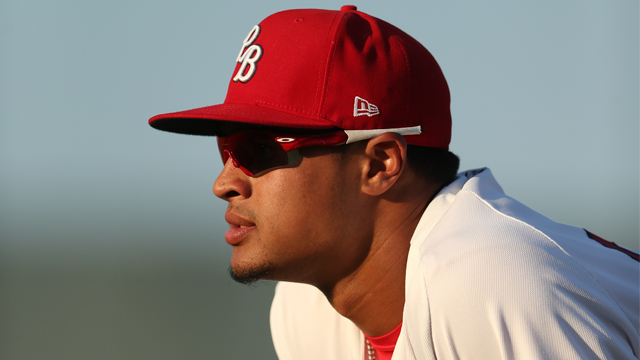 Sam Tuivailala has been one of the best strikeout pitchers in the Florida State League this year.

And his right arm isn't what initially impressed the St. Louis Cardinals.

Tuivailala was selected by the Cardinals in the third round of the June, 2010 First-Year Player Draft for his tools as an outfielder and spent his first two professional seasons rotating from outfield to shortstop to third base. In 2012, Tuivailala made the transition back to the mound while playing rookie ball for Johnson City.

The conversion wasn't easy. Between Johnson City and Low-A Peoria in 2012 and 2013, Tuivailala posted an 0-3 record with a 5.03 ERA in 39 relief appearances. Despite the slow start to his pitching career, the right-hander notched 73 strikeouts in just 48.1 innings.

Over his first two seasons of working strictly from the mound, Tuivailala made huge strides in the right direction.

"The biggest thing was my secondary pitches," said Tuivailala. "In high school I just threw fastball/curveball - and not even a lot of curveballs. I mostly just threw the fastball, because I could get it by guys really good.

"Up here guys can hit a 97 [mph] fastball. So learning how to throw that curveball and changeup helped out the fastball. From a batter's standpoint, they couldn't really sit on the fastball. They have to think about all three pitches."

The improvements made in the off-speed pitches to go along with his blinding fastball have made Tuivailala a dangerous pitcher in 2014. Through May 22, Tuivailala appeared in 17 games for the Cardinals - the most appearances on the team - and owned a 3.38 ERA (7ER/18.2IP).

Tuivailala has ranked among the league's best in strikeouts all season long. As of May 22, the 21-year-old was first among Florida State League relievers with a 13.98 strikeouts per nine innings pitched ratio. In 18.2 innings, he punched out 29 batters compared to just 11 walks.

While throwing harder than 95 mph can definitely help a player's strikeout total, Tuivailala attributes his success to something else.

"Getting ahead of hitters is the key, Tuivailala noted. "That first-pitch strike is pretty crucial to get into a pitcher's count. My off-speed pitches will then help out my fastball. Getting hitters off my fastball is important so that deep in the count I can use that to my advantage."

If Tuivailala continues to improve at his current, rapid rate, batters everywhere are in serious trouble. Since he was drafted out of high school, Tuivailala already has four years of professional experience before the age of 22.

Like fellow flame-throwing pitcher Carlos Martinez (who played for Palm Beach in 2011 and 2012), Tuivailala could be providing extra heat to the St. Louis bullpen before you know it.