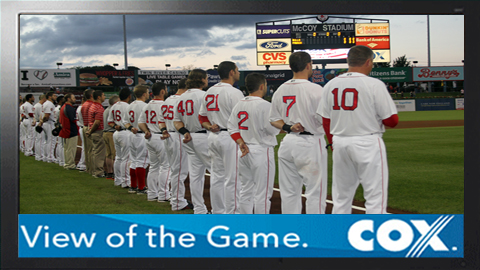 PAWTUCKET, RI - It took 14 innings for someone to score a run in Game 3 in front of 4,548 fans, but it would be Durham that crossed the plate first with a pair of unearned runs to take the third game of the series and take a 2-1 series lead with a 2-0 victory over Pawtucket.

Game 3 was a pitcher's duel from the outset on Friday night at McCoy Stadium between PawSox starter Matt Barnes and Bulls' starter Matt Buschmann.

Durham had their first threat in 2nd inning. With one out, Leslie Anderson doubled and moved to third on a single by Brandon Guyer. But, Barnes would strike out the next two batters to get through the frame unscathed.

The PawSox, likewise, threatened in the both the 2nd and 3rd inning putting a pair on with two outs, but could not come up with a clutch hit.

Still scoreless into the 5th against Buschamnn, Pawtucket received a walk and a hit by pitch to Justin Henry and Jonathan Diaz, respectively. The two runners would pull off a double steal to get to 2nd and 3rd with Alex Hassan at the plate and one out. Buschmann, however, struck out Hassan looking before exiting the game. Lefty Adam Liberatore came in and got Mark Hamilton to ground out to end the PawSox threat.

Barnes would retire the lead-off man in the 6th before issuing a one out walk to end his outing 5.1 scoreless innings allowing just four hits with seven strikeouts. He threw 91 pitches. Pedro Beato entered out of the bullpen and allowed a single to put runners at 1st and 2nd with one out. Beato would get a fly out and a ground out the get out of the inning keeping the game scoreless.

Pawtucket threatened again in the 8th as Jonathan Diaz led off with a walk. After a fielder's choice by Alex Hassan, Durham went to Jeff Beliveau to face Mark Hamilton and the PawSox pinch-ran Jeremy Hazelbaker. The speedy outfielder would steal second and move to third on a balk. Hamilton; however, would strike out, as would Bryce Brentz to end the 8th.

In the 9th, Anthony Carter pitched around a lead-off single by striking out Cole Figueroa to end the frame. In the bottom half of the inning, Dan Butler led off with a walk. Brock Holt would reach on a fielder's choice as Durham got the out on the lead runner at second. Christian Vazquez bounced into a fielder's choice as well with Holt being tagged out between second and third. After an error put runners at 1st and 2nd, Justin Henry lined out to short to end the 9th inning still knotted 0-0.

Durham came out hot in the 10th against Carter as Tim Beckham doubled to start the inning. After an intentional walk, a sacrifice bunt moved runners to second and third. A second intentional pass was issued to load the bases. Chris Martin would be summoned out of the PawSox bullpen and he would strike out Guyer and Mike Fontenot to strand the bases loaded.

The game moved to the 12th still scoreless, but the PawSox would get the lead-off batter on base thank to a Christian Vazquez walk. Heiker Meneses would sacrifice him to second. Justin Henry then lined a ball off the pitcher, which may have saved a run, moving Vazquez to third. An intentional walk and a hit by pitch loaded the bases for Mark Hamilton, who then struck out to strand the bases loaded.

Ryan Rowland-Smith pitched flawlessly for 2.2 innings to take the game into the 14th still 0-0. Chris Carpenter came in to pitch the 14th and got the lead-off man on a strikeout. Kevin Kiemaier then hit a fly ball to right that was dropped by Bryce Brentz resulting in a three base error. After an intentional walk put runners on the corners, Tim Beckham hit a ground ball to second base. Brock Holt would fire home to an unoccupied plate allowed Kiermaier to score the game's first run. After another walk put runners on the corners again with one out, Jason Bourgeois hit into an RBI fielder's choice pushing the 2nd run across making it 2-0.

Pawtucket would mount a comeback in the 14th. A hit by pitch started the frame. After a pair of outs, two walks were issued to keep some life in the PawSox dugout. But, with the bases loaded and a full count, All-Star closer Kirby Yates struck out Bryce Brentz swinging to end the game with Durham taking a Game 3 by a 2-0 final score and take a 2-1 series advantage.

The two teams combined for 21 walks, 33 strikeouts and 33 men left on base. There was only one hit in the game with a runner in scoring position, by Durham in the 2nd inning, but it did not produce a run.

The series will continue at McCoy Stadium for Game 4 of the Governors' Cup Finals Saturday night at 6:05pm with the PawSox needing a win to keep their season alive. Pawtucket will send Charlie Haeger (1-0, 0.00) to the mound against righty Merrill Kelly (1-0, 0.00) of the Bulls. Games 5 would be at McCoy Sunday at 1:05pm if necessary.

Tickets for all possible 2013 PawSox playoff games at McCoy Stadium are on sale at the Box Office at McCoy. Fans can also charge tickets with any major credit card by calling the PawSox at (401) 724-7300 or visiting the PawSox website at www.pawsox.com. Great Box Seat tickets are still available!