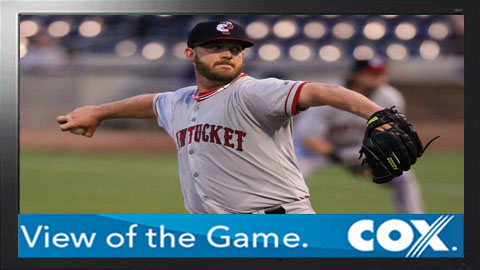 DURHAM, NC - The Durham Bulls capitalized on two PawSox mistakes to beat Pawtucket 2-1 in Game 2 of the Governors' Cup Championship Series to knot the series at a game apiece as the set shifts back to McCoy Stadium Friday night.

If Tuesday night's game was any indication of how this Governors' Cup finals would turn out, the PawSox and Bulls would be in for a great series.

Game 2 featured knuckleballer Steven Wright, coming off of a Game 3 victory in the semi-finals over Rochester, on the hill against the International League Pitcher of the Year J.D. Martin of Durham.

After two scoreless frames, the PawSox were the first squad to plate a run in the 3rd inning. Dan Butler and Justin Henry started the inning with singles before Heiker Meneses sacrificed runners to second and third with one out. Jonathan Diaz followed with a groundout to shortstop to score Butler and give Pawtucket a 1-0 lead.

Steven Wright encountered his first bit of trouble in the 5th inning after he allowed a one-out double to Fall River native Craig Albernaz. A groundout moved Albernaz to third. Cole Figueroa then drew a walk, but Tim Beckham would ground out to shortstop to strand runners on the corners to end the frame with Pawtucket still in front 1-0.

In the bottom of the 6th, Jason Bourgeois led-off with a single before Vince Belnome drew a walk. Brandon Guyer failed to get a sacrifice bunt down on the first two pitches, so with two strikes he was swinging away and bounced into a double play, but Bourgeois moved to third with two out. That would be a crucial 90 feet as the second pitch to Shelley Duncan got away from Butler behind the plate scoring Bourgeois to tie the game 1-1.

Wright went out to start the 7th and would retire the first batter on a ground out, but a routine ground ball to short by Albernaz was thrown past first and out of play putting the go-ahead run in scoring position with one out. Kevin Kiermaier followed on the next pitch with an RBI double to left center to plate Albernaz to give Durham a 2-1 lead. Wright would exit after the double throwing 6.2 innings allowing two unearned runs. He struck out six and walked three.

Chris Martin tossed an inning and a third of scoreless relief to keep the PawSox within just a run headed into the 9th.

Durham called upon closer Kirby Yates, who was 20 of 23 in save chances in the regular season. After issuing a lead-off walk to Alex Hassan, Yates struck out Mark Hamilton, got Bryce Brentz to fly out to left and struck out Tony Thomas to secure the 2-1 victory for Durham.

The series will shift to McCoy Stadium for Game 3 of the Governors' Cup Finals Friday night at 7:05pm. Pawtucket will send Matt Barnes (0-1, 9.00 in the post-season) to the mound against righty Matt Buschmann (8-2, 2.97 in the regular season) of the Bulls. Game 4 will be at McCoy Saturday at 6:05 and Game 5 would be Sunday at 1:05pm if necessary.

Tickets for all possible 2013 PawSox playoff games at McCoy Stadium are on sale at the Box Office at McCoy. Fans can also charge tickets with any major credit card by calling the PawSox at (401) 724-7300 or visiting the PawSox website at www.pawsox.com. Great Box Seat tickets are still available!