Teams will play make-up doubleheaders tomorrow (Saturday) at 4:35 pm and Sunday at 12:35 pm at McCoy 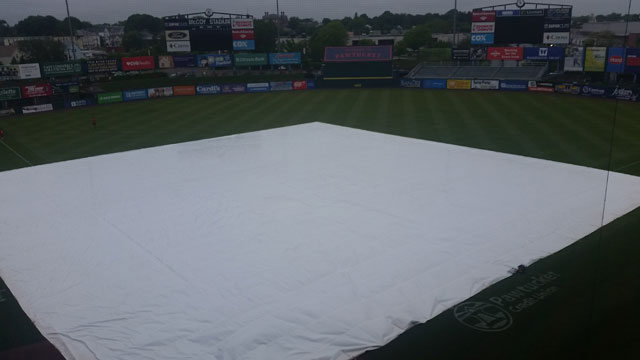 Tonight's (Friday's) scheduled International League game between the host Pawtucket Red Sox and the visiting Rochester Red Wings at McCoy Stadium has been postponed due to heavy rain, which is forecasted to continue throughout the evening, along with unplayable field conditions.

The PawSox and Red Wings will make-up tonight's rainout with a single-admission doubleheader on Sunday at 12:35 pm. The teams already have a make-up doubleheader tomorrow (Saturday) at McCoy beginning at 4:35 pm (from a May 14th rainout during Rochester's last visit to Pawtucket). All games during these back-to-back doubleheaders will be 7-innings.

Fans holding field box seats, reserved box seat tickets or general admission tickets for Friday's game at McCoy (without a specific rainout date printed on them) can trade those in for any remaining regular-season game at McCoy based on availability.

The 38th Annual Armed Forces Night ceremonies scheduled for Friday at McCoy will be rescheduled.

Fireworks to Beatles music will follow the second game of tomorrow's doubleheader. On Sunday, fans who purchase a BBQ ticket that includes a pre-game Father's Day catch, can do so from 11:30 - 12:00 Noon.

The 1st-place Lehigh Valley IronPigs, owners of the best record in all of Minor League Baseball, will visit for a 3-game set from Monday - Wednesday to close out this homestand (the first two games at 7:05 pm and the get-away finale next Wednesday at 6:05 pm).

PawSox probables for these two upcoming doubleheaders vs. Rochester at McCoy…