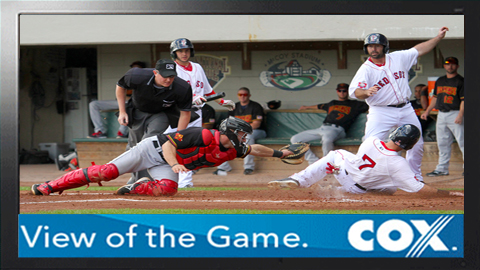 PAWTUCKET, RI - The Pawtucket Red Sox combined on a four-hit, 3-0 shutout of the Rochester Red Wings to win the Best-of-Five series. The PawSox will now have a chance to defend their Governors' Cup Title against the Durham Bulls in the Finals beginning Tuesday in Durham.

The team that scored first in each game of the series would go on to win, so in a decisive Game Five getting on the scoreboard was crucial. Pawtucket would capitalize on plating the game's first run.

In the 2nd inning, Rochester starter Virgil Vasquez retired the first two batters with ease, but Jeremy Hazelbaker started a rally with a two out triple. Dan Butler followed with an RBI single with two strikes to score Hazelbaker and take a 1-0 lead. Justin Henry then doubled before Heiker Meneses singled to center field scoring Butler and Henry to give Pawtucket a 3-0 advantage.

Pawtucket went to knuckleballer Charlie Haeger in the must win contest and he rewarded Manager Gary DiSarcina with his decision. Haeger would not encounter any trouble until the 6th inning when he allowed a pair of this and walked a batter to start the frame. After a strike out of Jeff Clement with the bases loaded, Haeger was removed from the game after throwing 99 pitches. Chris Martin came in out of the bullpen and struck out pinch-hitter Chris Parmelee and got a fly out from Aaron Hicks to strand all three runners on base.

That stop would be all the pitching staff would need as Martin finished throwing 2.1 scoreless and hitless innings. Ryan Rowland-Smith pitched a flawless frame and Anthony Carter finished off the Red Wings retiring Eric Farris on a ground ball to shortstop to clinch a spot in the Govenors' Cup Finals against the Durham Bulls starting Tuesday.

The PawSox will hit the road to Durham Bull Athletic Park and begin the Governors' Cup Finals Tuesday night at 7:05pm. Pitching match ups are still to be determined. Pawtucket will return home to McCoy Stadium for Game 3 Friday night the 13th at 7:05pm and if necessary games Saturday at 6:05 and Sunday at 1:05pm.

Tickets for all possible 2013 PawSox playoff games at McCoy Stadium are on sale at the Box Office at McCoy. Fans can also charge tickets with any major credit card by calling the PawSox at (401) 724-7300 or visiting the PawSox website at www.pawsox.com.