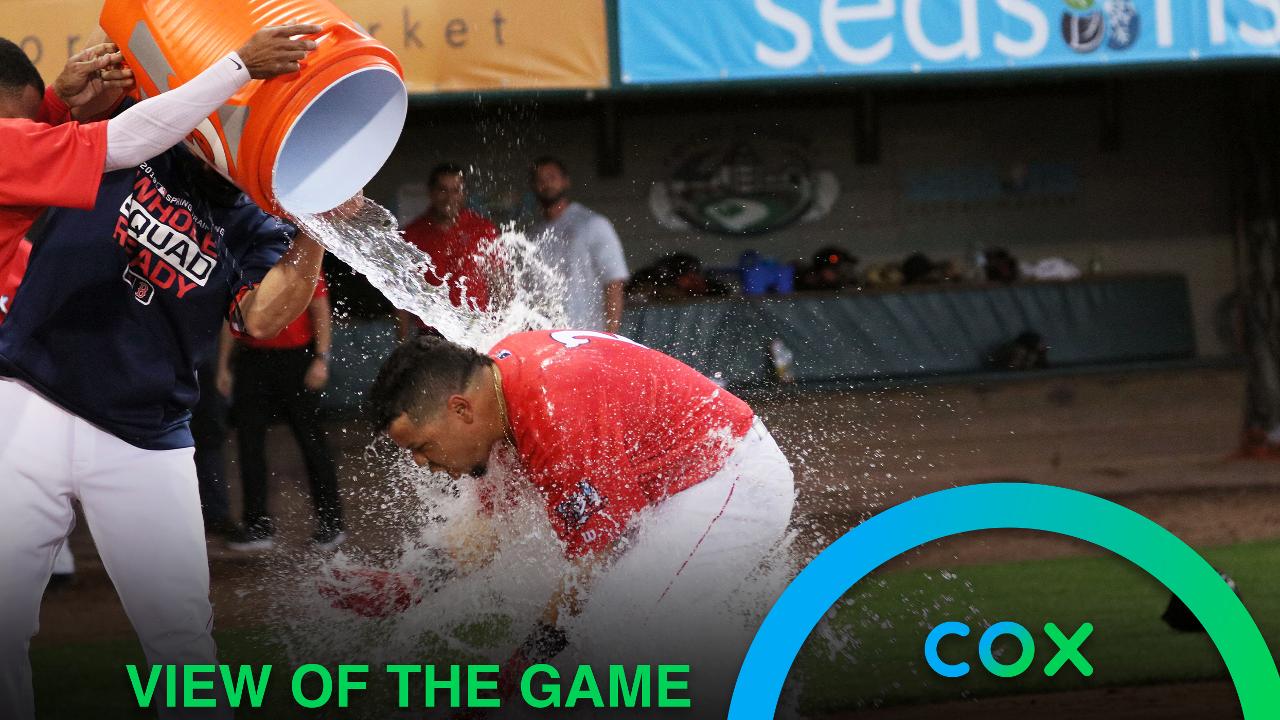 PAWTUCKET, R.I. - In two extra-inning games that combined to last 6 hours and 27 minutes, the Pawtucket Red Sox (57-78) split their doubleheader with the Scranton/Wilkes-Barre RailRiders (73-63) on Thursday at McCoy Stadium, taking game one by a 9-5 final in walk-off fashion, and falling 8-4 in 10 innings in game two.

The PawSox have now gone to extra innings in four of their last five games.

Juan Centeno blasted a walk-off grand slam in the bottom of the eighth inning to lead Pawtucket to a 9-5 win in game one, part of a three-hit performance for the Pawtucket catcher.

It was Pawtucket's second walk-off victory of the season.

For the first time in the series, the PawSox scored first in game one. They grabbed the lead in the second inning on an RBI single from Jantzen Witte.

The RailRiders tied the game at one in the third thanks to Erik Kratz's sacrifice fly.

But the PawSox responded immediately by regaining the lead in the bottom half of the inning when Josh Ockimey doubled home C.J. Chatham.

Pawtucket tied the game in the bottom half of the inning. when Centeno stole third base and then scored home when Kratz's throw to third base sailed into left field.

The PawSox added a pair on solo home runs from Michael Chavis and Ockimey in the fifth to make it 5-3.

Ockimey reached in all four plate appearances in game one, going 3-for-3 with two doubles and a home run, and he was hit by a pitch.

After Wendell Rijo's solo home run in the sixth inning made it 5-4, Trey Amburgey blooped a single to right field to tie the game in the top of the seventh.

Bobby Dalbec drove a 2-2 pitch from Brian Keller over the right-field wall in the second to put Pawtucket on the board.

McBroom struck again in the third, belting a solo shot into the RailRiders bullpen to make it 3-1.

Pawtucket tied the game with two runs in the fifth, one on Gorkys Hernández's sacrifice fly and another on a double by Chatham.

Game two went into extra innings, and Scranton/Wilkes-Barre took a lead on a wild pitch, but Dalbec tied the game at four with a run-scoring single.

The game remained tied until the 10th when Cole Sturgeon was summoned for his fourth relief appearance of the season, and the RailRiders scored four runs to take the lead for good.

The RailRiders are now tied with the Syracuse Mets for first place in the International League North standings heading into the final weekend of the season.

The PawSox begin their final series of the season tomorrow with a doubleheader against the Lehigh Valley Iron Pigs that begins at 5:05 p.m. Pawtucket right-hander Erasmo Ramírez (5-8, 4.66 ERA) is scheduled to oppose Iron Pigs righty Ramon Rosso (2-3, 4.98 ERA) in game one. Radio coverage on WHJJ (920 AM and 104.7 FM) and throughout the PawSox Radio Network begins at 5:00 p.m.

Tomorrow, the PawSox will take the field as the Pawtucket Fightin' Quahogs in a name change that pays homage to one of Rhode Island's most famous cuisines. The PawSox will wear caps and jerseys featuring the Fightin' Quahogs logo for the second game of that Friday doubleheader. On August 31 (Saturday), the PawSox will host Team Poster and Autograph Night. The first 5,000 fans entering the stadium will receive a full-color PawSox Team Poster suitable for framing. From 4-5 PM before the game, fans will also be allowed on the field for pictures and autographs with their favorite players. After the game, fans can enjoy post-game fireworks set to music from Motown. On September 1 (Sunday), fans can play catch on the field and then run the bases post-game on a Sunday FunDay. Lastly, on September 2 (Monday), the PawSox will put the bow on 2019 with their traditional Last Game Celebration.