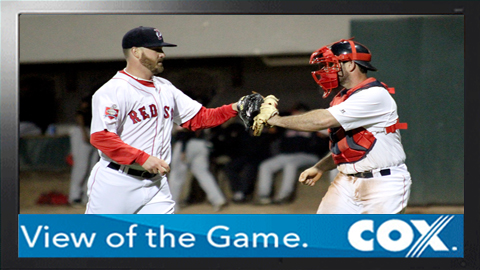 The PawSox threatened in the first against Dean loading the bases with only one out, but Bryce Brenzt bounced into an ending double play to keep the game scoreless.

In the top of the 2nd, Aaron Hicks doubled with two outs and stole third, but was stranded there as Heiker Menses made a sparkling play at shortstop and Drew Sutton with a great scoop at first.

Pawtucket took that momentum from that play in the top of the 2nd to plate two runs in the bottom half of the inning. Dan Butler started the frame with a single and moved to second on a throwing error. Brock Holt followed with an RBI single to score Butler putting the PawSox in front 1-0. Jonathan Diaz then singled before Meneses sacrificed runners to second and third. Jackie Bradley Jr. followed with an RBI groundout to put the Sox up 2-0.

Steven Wright encountered his first jam in the 3rd allowing a lead-off double before walking two batters with one out to load the bases. But, number three hitter Eduardo Escobar bounced into an inning ending double play to keep Pawtucket in front by two runs.

In the 5th, Mark Hamilton, who had been hitless in the series coming into Friday's game, came to the plate with a runner at first and two out before the DH blasted a two-run homer over the right field wall to put the PawSox comfortably in front 4-0 after five innings.

Wright was able to wiggle his way through trouble in the 6th. After issuing a lead-off walk, Wright retired the next two batters on a pop up and a strikeout. A single by Eric Farris and a wild pitch put runners at second and third, but Wright struck out Ray Olmedo to end the frame.

The knuckleballer would retire the first batter in the 7th before allowing a single and exiting the game after throwing 117 pitches. He allowed six hits while walking four and striking out five. Wright did not allow a run to Rochester on the season in 13.1 innings of work. Pedro Beato came in out of the bullpen and allowed a bunt single, but struck out the next two batters to take the game to the stretch with the PawSox leading 4-0.

Rochester would finally crack the score column in the 8th against Beato as he allowed a single and a walk before Ray Olmedo singled to right making it 4-1. Ryan Rowland-Smith would enter and strike out the next two batters to get out of trouble.

The PawSox added a big insurance run in the 8th as Meneses delivered an RBI single to center with two outs to put Pawtucket in front 5-1.

Rowland-Smith would take care of the game from there tossing a scoreless 9th inning to notch his first playoff save and preserving the victory for Steven Wright.

Game Four will take place Saturday night at 6:05pm at McCoy Stadium in the best of five set with the PawSox looking to clinch a spot in the Governors' Cup Finals. Pawtucket will send former 1st round pick Matt Barnes (1-0, 0.00) to the mound against Red Wings lefty Scott Diamond (4-0, 2.41).

Tickets for all possible 2013 PawSox playoff games at McCoy Stadium are on sale at the Box Office at McCoy. Fans can also charge tickets with any major credit card by calling the PawSox at (401) 724-7300 or visiting the PawSox website at www.pawsox.com.

Tickets for the 2013 Governors' Cup Semi-Finals and Governors' Cup Finals will be priced the same as regular-season tickets. Box Seats are $12.00 apiece while General Admission are $8.00 for Adults and $5.00 for Children (aged 12 & under) & Senior Citizens.