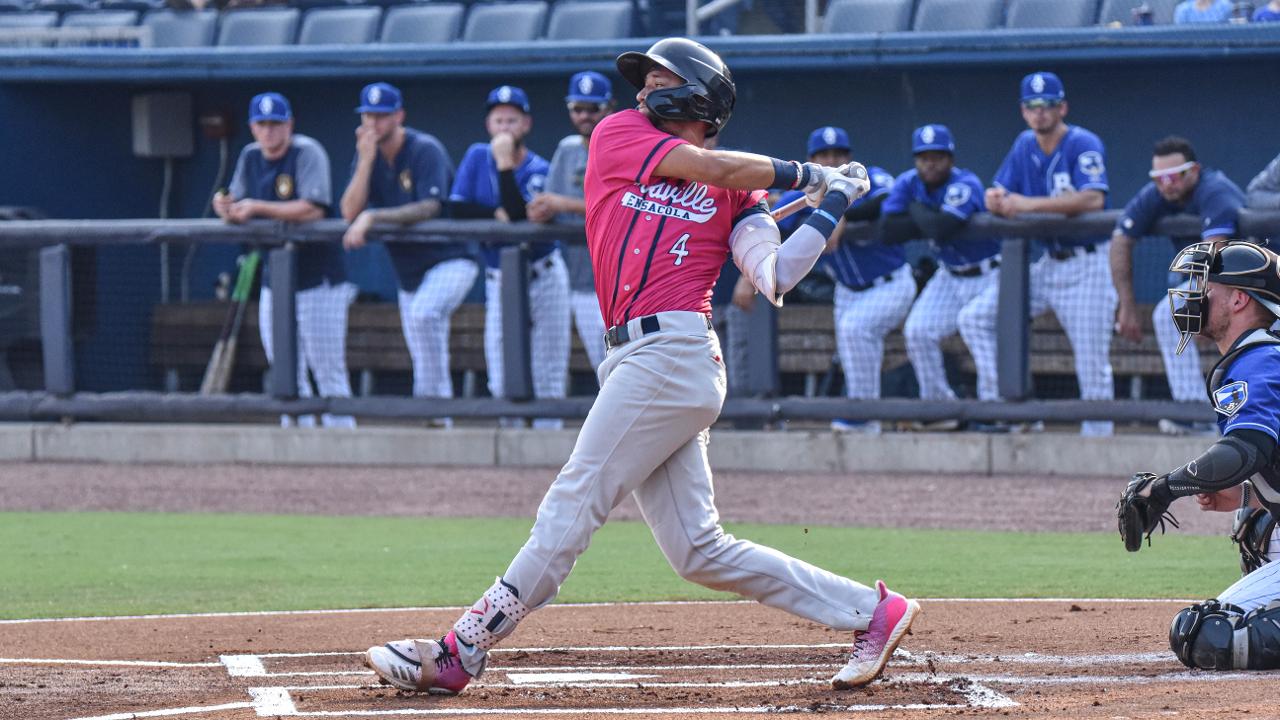 The Blue Wahoos' Royce Lewis connects on a pitch Sunday. The former No. 1 overall pick had hits in his first three at-bats and helped the Blue Wahoos take a trio of leads, but Biloxi's eighth-inning explosion led to 8-4 win in deciding playoff game. (Daniel Venn)

BILOXI, Miss. -- The Blue Wahoos went the distance in their divisional playoff series against the Biloxi Shuckers.

But that didn't make their heartache any easier to handle.

The Blue Wahoos took their third lead in Sunday's deciding game on an 8th inning homer from catcher Ryan Jeffers, only to have the bullpen give up a deluge in the bottom half of that inning, as the Shuckers rolled to an 8-4 win to take the Southern League South Division championship at MGM Park.

"Unfortunately, we couldn't stop the bleeding," said Blue Wahoos manager Ramon Borrego, emerging from a silent clubhouse.  "When you take a lead in a game like that, you are looking for pitching. You are trying to shut them down."

"The game was right there. When you get to that point, you are looking for the pitching."

In winning Sunday's decisive fifth game, the Shuckers advance to the Southern League championship series against the defending champion Jackson Generals. Biloxi will seek to win the league title for the first time.

This became the third time in five years the Blue Wahoos were knocked out of the playoffs by their Gulf Coast neighboring rival. The Blue Wahoos had advanced to post-season for a fifth consecutive year, the first as a Minnesota Twins affiliate, which tied Pensacola with the Mobile BayBears for the second longest playoff streak in the 55-year history of the Southern League.

The Shuckers, however, have proven to be a playoff nemesis. But unlike the past two playoff losses - one in three games, the other in four - this one had opportunities for the Blue Wahoos to produce a different outcome.

The Blue Wahoos rallied last Wednesday night in Game 1 with five runs in the ninth to stun the crowd in Biloxi and take a lead 10-9 lead. But again the bullpen wasn't able to hold on, yielding a tying run in the ninth, then a walkoff homer in the 10th for an 11-10 loss.

Trailing 0-2 in the series, after a 4-1 loss Thursday in the second game, the Blue Wahoos beat the Shuckers 3-2 Friday in their only game in Pensacola as the wild card team, then scored five times in the ninth to win 10-5 and force a deciding game.

With the pitching staff taxed, the Blue Wahoos activated lefthander Bryan Sammons, who had been sent down to Fort Myers, as the Game 5 starter. He produced a solid outing, working 4.2 innings. The only damage was a pair of solo home runs, but he struck out five and walked only one.

"He gave us what we needed," Borrego said. "It was good to see. That was exactly what we wanted."

He left in the fifth with a 3-2 lead. Jeffers, who went 3-for-4 in the game, started a two-run rally in the fourth with a double. He later scored on Mark Contreras ground out. Caleb Hamilton hit a two-out double to score Jose Miranda, who had walked.

In the sixth inning, Travis Blankenhorn narrowly missed a home run to the deepest part of MGM Park, but Shuckers centerfielder Dillon Thomas tracked the ball down at the base of the wall. With two runners on, Hamilton was then robbed of a sure RBI hit by Shuckers shortstop Luis Aviles Jr.

The Shuckers then tied the game on a sacrifice fly in the bottom of the sixth.

In the eighth, Jeffers broke the 3-3 tie with his opposite field home run into the right field berm.

The Blue Wahoos called upon left-hander Stephen Gonsalves, who had pitched in games last year with the Twins. But from the outset, he was off in the bottom of the eighth inning.

"When you take a one-run lead with six outs away, we got to pitch, we got to execute," Borrego said. "That was the difference.

Gonsalves gave up a leadoff single, walked the next batter, then created a scary situation when his pitch struck Thomas in the face as he squared around to bunt. Thomas collapsed to the ground and had to be rushed off the field by paramedics and flown to a hospital where he was treated for a broken jaw and other damage.

Unfortunately, the ball hit him square in the face.

"The first batter, he (Gonsalves) was wild, and you can see that, and then that pitch (that struck Gonsalves) slipped right from his hand," said Borrego, clearly shaken by the accident.  "That was scary. I hope that kid (Thomas) is doing good.

"(8th inning implosion) was unbelievable. I never expected that. It (first 3 batters of inning) put us in a tough situation, but it's the game some time… I know (Gonsalves) is a better pitcher than that."

With the bases now loaded in eighth, Borrego summoned Alex Phillips  to replace a shaken Gonsalves. Phillips gave up a sacrifice fly for one out and the tying run. He then gave up a couple more hits, along with a errant throw by Caleb Hamilton, and suddenly the Shuckers had a commanding lead.

"We just couldn't get the pitching," Borrego said.

But the season provided plenty of memories. The Blue Wahoos played much of the second half with a trio of the Twins' last three No. 1 draft picks - Alex Kirilloff, Royce Lewis and Trevor Larnach.

Lewis went 3-for-3 in first three at-bats and nearly had a fourth when a scorched ball was turned into a inning-ending double play in the seventh by third baseman Jake Gatewood.

Kirilloff, who homered in each of the first four playoff games and batted .381 in the series, was 1-for-4 Sunday and kept alive the ninth inning with his broken bat single. With two on, two out, Lewis struck out to end the game.

Larnach went 0-for-4 and struggled in the series, but had many big hits during the second half of the season.

"That was really special to see those guys together and for the fans," Borrego said. "We won't have that again, but we have good players who will be here (Pensacola) next year."