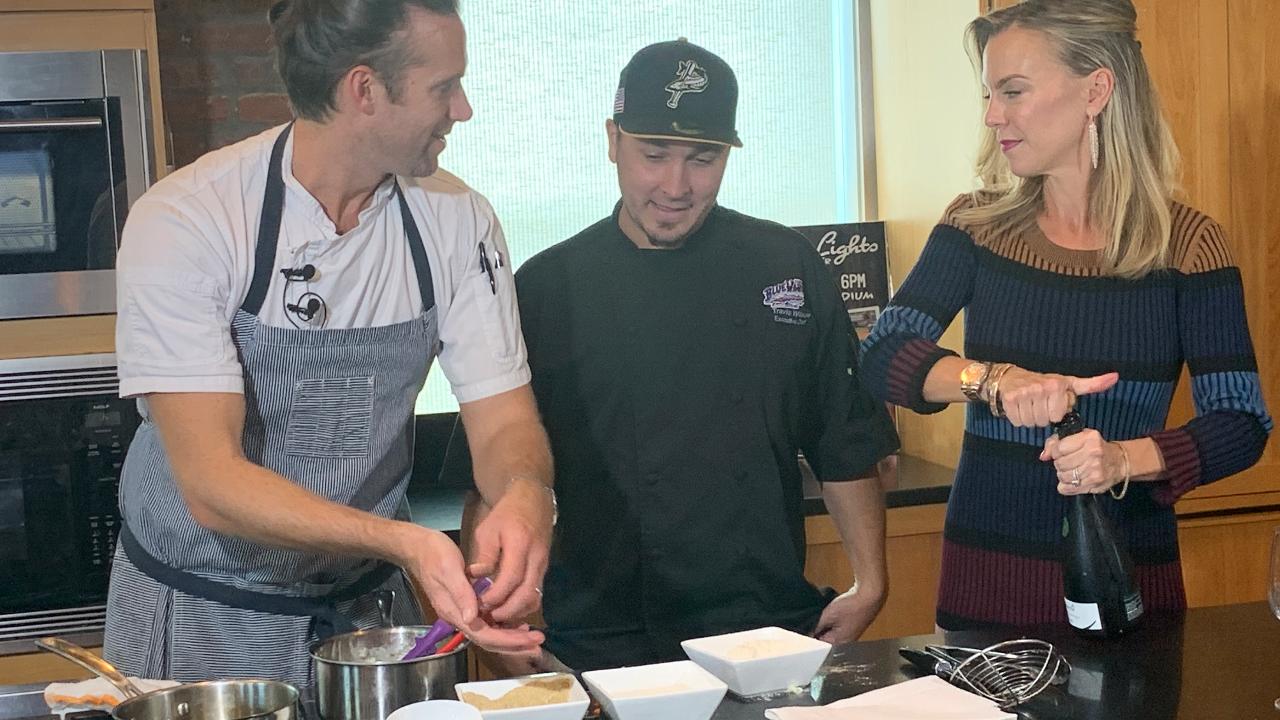 Their passion for food creation and presentation has provided Pensacola natives James Briscione and wife Brooke Parkhurst a variety of venues to showcase culinary skills.

Okay, but how about preparing a five-course dinner to serve on a football field?

"Definitely a first, but I'm going to love it," said Briscione, laughing, the award-winning, executive chef of Angelena's Italian Ristorante on East Intendencia Street, who played prep football in the mid 1990's at Booker T. Washington.

It will happen Nov. 15 at the Farm To Table Dinner on Admiral Fetterman Field at Blue Wahoos Stadium, the night before the University of West Florida's final, regular-season home football game.

This is the third Farm To Table event, hosted by the Blue Wahoos, but the first in late fall and tables set up with goalposts as the backdrop and wine tables located in the sideline area.

The previous two were held in early September (2018) and May 11 this year.

"The first one we did, I remember being very concerned about how things could be served hot and in a timely fashion on a field," said Parkhurst, a Pensacola High graduate, wine director and co-owner with Briscione of Angelena's. "The food dishes came from a back kitchen through the dugout area and to the home plate area of the baseball diamond.

"And you're wondering, 'How can it look lovely, finished properly, and how to serve on a baseball field.' But it was executed well."

Shannon Reeves, the Blue Wahoos events manager who has coordinated the Farm To Table events, said this one will be set to go on the football field unless inclement weather forces a change.

The five course meal and all-inclusive event is $125 per-person and will feature music, along with inclusion of a variety of Italian specialty wines chosen by Parkhurst. It will also feature a combination of dishes prepared by Briscone and Blue Wahoos executive chef Travis Wilson.

It will feature appetizers including a pumpkin devil egg, main courses including chicken ravioli and a steak dish, along with desert featuring pumpkin tiramisu.

"We tried to take some classic football foods and put our own little, elevated 'Farm to Table' twist on them," Briscione said during a video preview at the Bodacious Shops upstairs kitchen area. "And being Angelena's we have to put our Italian spin on it as well."

Added Parkhurst, jokingly: "(Briscione) knows I won't watch any football unless the food is really good so that might have been the impetus."

Briscione, a two-time champion of the Food Network's reality-based competition show, "Chopped," said there is a different kind of reward when preparing food in a stadium setting for a large gathering.

"One of the funnest parts of this meal is the whole thing is served family style, so you get big platters to pass around to each other and share and try," he said.

Wilson remembers the spring "Farm To Table" event in May was his first official event when returning to the Blue Wahoos as executive chef.

"I'm excited to do this one," said Wilson, who will prepare his own, specialty jumbo, smoked, chicken wings to serve at the Nov. 15 event. "I think our menu is great. I love football, I love fall. I think this is something unique for us and people should really enjoy it."

Briscione and his wife opened Angelena's in July as part of the Southtowne complex. They were living and working in New York, but the lure of having their own restaurant and return to Pensacola brought them back home.

This partnership with the Blue Wahoos presents different kind of opportunities to showcase their creations.

WHERE: Blue Wahoos Stadium (on field).