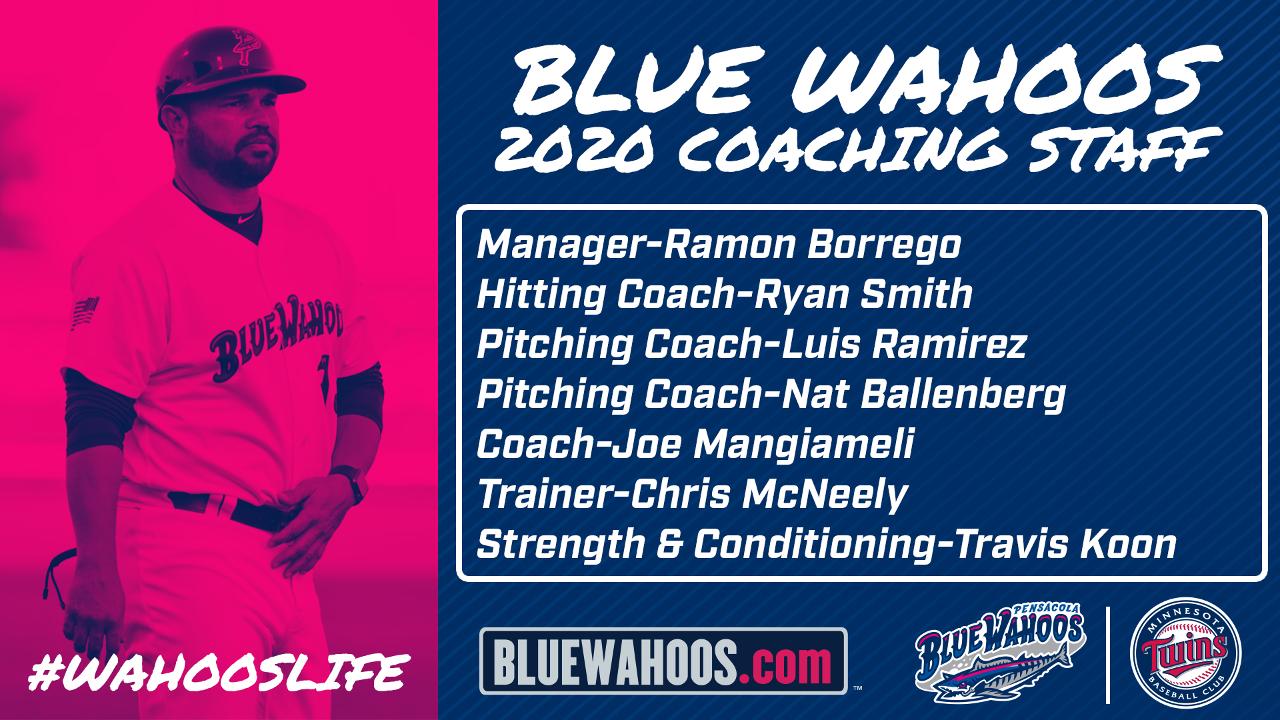 The Minnesota Twins announced their Double-A minor league coaching staff assignments for the 2020 season on Friday, bringing a new-look staff to Pensacola with a familiar face at the helm. 2019 Blue Wahoos manager Ramon Borrego will return to lead the Blue Wahoos in 2020 after taking the team to the Southern League playoffs with a 76-63 finish last season.

Borrego will be surrounded by an almost entirely new support staff in 2020. Ryan Smith will join the Blue Wahoos from the Twins level A affiliate, the Cedar Rapids Kernels, to serve as hitting coach. Pensacola will once again employ two pitching coaches with both Luis Ramirez and Nat Ballenberg joining the Blue Wahoos from High-A Fort Myers. Former Quinnipiac baseball assistant coach Joe Mangiameli will serve as a coach for Pensacola. Travis Koon returns as Pensacola's strength and conditioning coach while Chris McNeely, formerly of the Los Angeles Dodgers organization, becomes the team's athletic trainer

Ramon Borrego has coached in the Twins organization for 15 seasons, including 11 as a manager. After reaching Triple-A in a seven-season playing career with the Twins, Borrego became a coach in his native Venezuela for four seasons with the Twins affiliate in the Venezuelan Summer League. In 2009, he was promoted to manager of the Twins Dominican Summer League team before moving up to manage the Gulf Coast League (Rookie) Twins from 2010 through 2017. In 2018, he was promoted to High-A, leading the Fort Myers Miracle to the Florida State League title. In his first season at the Double-A level in 2019, he took the Blue Wahoos to the Southern League playoffs and graduated eight players from the team's roster to the Major Leagues.

Ryan Smith joins the Blue Wahoos as hitting coach from the Cedar Rapids Kernels, the Twins A-affiliate. With Smith coaching hitters in 2019, the Kernels finished second in the Midwest League in home runs and qualified for the playoffs with a 78-62 record. He played collegiately at the College of Central Florida and Valdosta State University and spent three seasons as a coach at Central Florida before joining the Twins organization in 2019.

A pair of pitching coaches move up from High-A Fort Myers to Pensacola in 2019: Luis Ramirez and Nat Ballenberg.

Ramirez spent four seasons as a pitching coach with the Twins rookie level affiliate Elizabethton before being promoted to Fort Myers in 2019. Under his tutelage, the Fort Myers pitching staff posted a 3.11 team ERA during the season, second best in the Florida State League and led the league with 1,188 strikeouts. Prior to his coaching career, he played professionally for 14 seasons in the United States, Venezuela, Colombia, and Taiwan.

Ballenberg joined the Twins during the 2019 season, assisting the Fort Myers coaching staff with performance evaluation and training to enhance player development. He spent nine seasons as a coach at Haverford College before joining the Twins organization. He holds a degree in economics from Haverford College and a Masters in Sports Leadership from Northeastern University.

Mangiameli enters his first season of coaching professionally in 2020 with the Blue Wahoos after spending 2019 with Quinnipiac University baseball and the three previous seasons with Eastern Connecticut State University. A 2016 graduate from Southern New Hampshire University with a degree in Sport Management, Mangiameli played collegiately for the SNHU Penman.

The Blue Wahoos training staff will consist of strength coach Travis Koon, a returnee from the 2019 staff, and athletic trainer Chris McNeely, who joins the Twins organization following four seasons as a coach with the Los Angeles Dodgers minor league system.