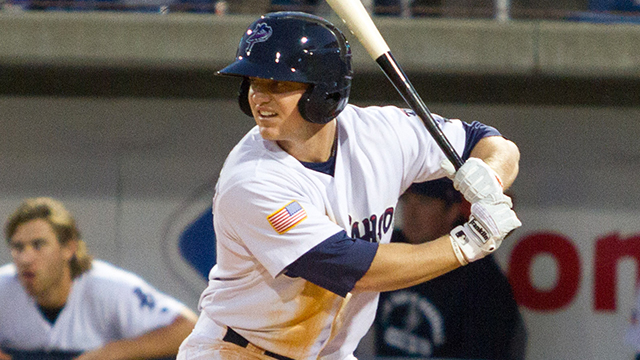 KODAK, Tenn., - The Pensacola Blue Wahoos jumped out to a 5-0 lead, thanks largely to second baseman Josh VanMeter, who has delivered clutch hits all season long and now leads the team with 44 RBIs.

However, the Tennessee Smokies scored five runs in the bottom of the fifth to tie the game and then Charcer Burks drove in the game-winning in the sixth inning for a 6-5 victory Sunday over Pensacola at Smokies Stadium. It was the fourth straight loss for the Blue Wahoos and the defeat allowed Tennessee to clinch the five-game series, going up 3-0.

Pensacola center fielder Gabriel Guerrero hit his 18th double of the year in the first inning. Blue Wahoos third baseman Nick Senzel then followed with a liner to center field to put runners on first and third. That's when VanMeter came up with two outs and smacked a line drive single to right field that scored Guerrero for a 1-0 Pensacola lead.

In Pensacola's four-run third inning, VanMeter singled in his second run of the game and also scored. He was 3-for-3 in the game and hit his 26th double, which ties him for fourth in the Southern League.

Pensacola first baseman Gavin LaValley singled in Guerrero to put Pensacola ahead, 2-0. VanMeter hit a soft liner to left field that drove in third baseman Nick Senzel for a 3-0 lead. Catcher Joe Hudson grounded out into a double play with the bases loaded that scored LaValley and Pensacola was up, 4-0. The final run of the inning came when center fielder Jonathan Reyonoso drilled a single to left to bring in VanMeter and give Pensacola what seemed like a commanding, 5-0, start.

Guerrero was 4-5 in the game and scored two runs and now has 32 multi-hit games this season and twice has had four hits in a game.

But then came the fifth inning when the Smokies batted through its order, scoring five runs on four hits, a walk and a fielding error. Tennessee catcher Erick Castillo, who was 3-3 in the game, doubled to drive in shortstop Carlos Penalver with the first run to trail Pensacola, 5-1.

Pensacola starter Deck McGuire then got the next two batters out on a sacrifice bunt and flyout. However, Tennessee right fielder Daniel Spingola singled to center to bring home Castillo and pull the Smokies within, 5-2. Tennessee second baseman David Bote followed with a double to score Spingola and make it a 5-3 game. Yasiel Balaguert hit a fly ball to Pensacola Aristides Aquino, who was charged with an error, and allowed both Bote and third baseman Jason Vosler to score, knotting the game, 5-5.

All five runs, three earned, came off McGuire, who allowed seven hits, walked one and struck out eight in his five innings of work.

Then in the bottom of the sixth, Burks, the Chicago Cubs No. 22 ranked prospect by MLBPipeline.com, singled to center to score Castillo to put Tennessee on top, 6-5.

Pensacola reliever Robert Stock gave up the game-winning run and dropped to 6-2 on the year. He pitched two innings and gave up three hits.

Meanwhile, Tennessee relievers Daury Torrez, Jake Stinnett and Craig Brooks combined to pitch 5.1 scoreless innings and give up just three hits to the Blue Wahoos, which had 13 in the game.

Pensacola fell to 20-23 in the second half in the Southern League South Division. Pensacola is 60-53 overall and won the first half title. Tennessee improved to 23-20 in the North Division and is 59-53 overall.