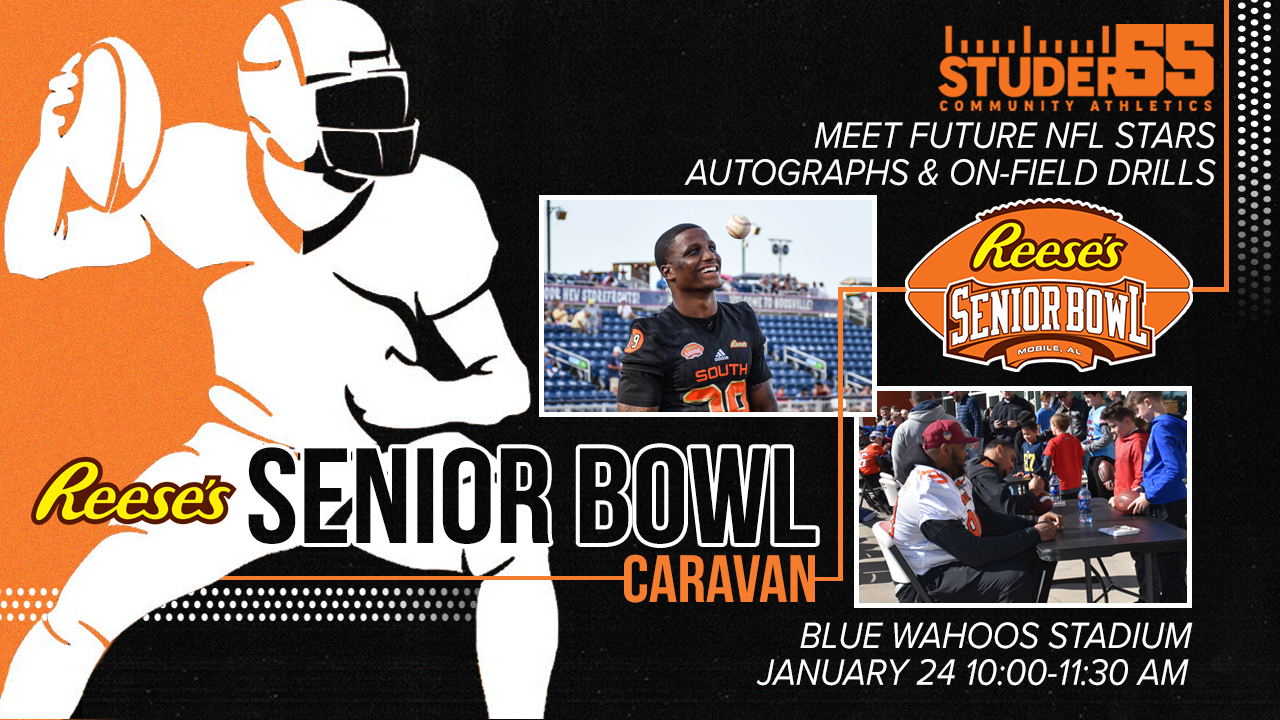 The 2020 Reese's Senior Bowl Caravan will visit Pensacola on Friday, January 24 from 10:00 AM - 11:30 AM, bringing top NFL draft prospects from across the nation to Blue Wahoos Stadium for a morning of free on-field instruction for area youth football players (ages 6-14) and an autograph session. The players will join with Studer/55 Community Athletics to lead drills for children in attendance on-field from 10:00 AM until 10:45 AM and sign autographs from 10:45 AM until 11:30 AM. Admission to the event is free to the public and gates and stadium concessions will open at 9:30 AM.

"We're very grateful and excited that the Senior Bowl will return to Pensacola again this year," Blue Wahoos team president Jonathan Griffith said. "It's an incredible gesture for the players to take time out of their busy schedule to visit Pensacola the day before such an important game in their careers, and we're proud to offer local youth football players and our fans the opportunity to share in the legacy of the Senior Bowl."

Since its inception in 1950, the Senior Bowl has featured rosters filled with future NFL stars including legends like Joe Namath, Walter Payton, Dan Marino, Brett Favre, Bo Jackson, and Blue Wahoos co-owner Derrick Brooks. Fifty-three Senior Bowl participants have gone on to be inducted into the Pro Football Hall of Fame, and approximately 500 Senior Bowl alumni are currently playing in the NFL. Ninety-three players who participated in the 2019 Senior Bowl were drafted by NFL teams, including New York Giants quarterback Daniel Jones and Jacksonville Jaguars quarterback Gardner Minshew II.

Pensacola has strong history with the game, as multiple local football players have participated in the game before beginning professional careers. Brooks, a Pensacola native and Washington High School graduate, was the Senior Bowl MVP in 1995 and was inducted into the Senior Bowl Hall of Fame in 2004. Fred Robbins, a Tate High School graduate, played in the 2000 Senior Bowl before embarking on a 12-season NFL Career that included a Super Bowl championship in 2007 with the New York Giants.

The 2020 Reese's Senior Bowl will be held at 1:30 PM on Saturday, January 25 at Ladd Peebles Stadium in Mobile, AL. More information and tickets to the game are available at SeniorBowl.com.