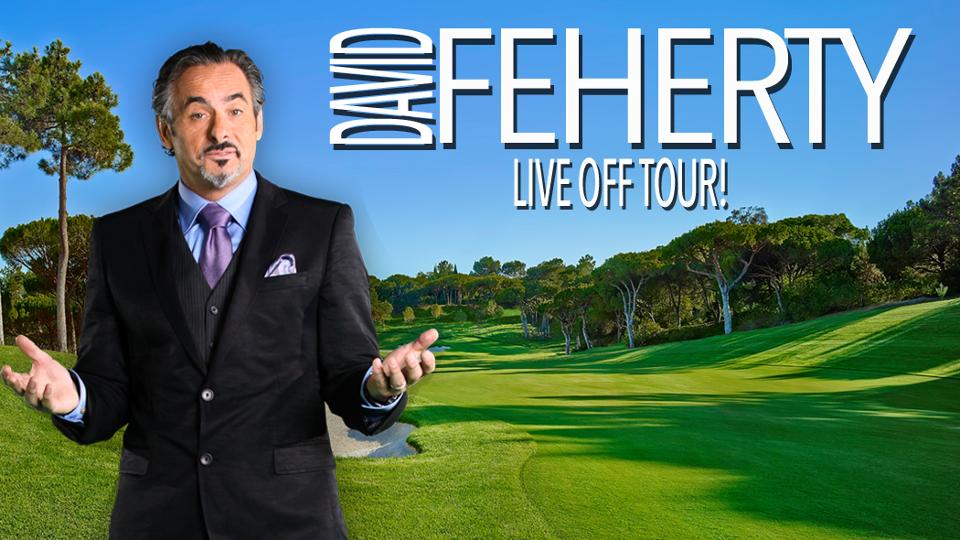 But he's keenly aware of the community's unique legacy in the sport.

"It may be something in the water there," said Feherty, whose quick wit and self-deprecating humor will be on display Sept. 19 (7:30 p.m.) at the Saenger Theater when his popular two-hour, one-man comedy show, "David Feherty Live Off Tour!" and question-answer with the audience adds Pensacola to list of national stops.

The show has been arranged by the First Tee of Northwest Florida. Proceeds from this event will benefit the local First Tee chapter to help grow junior golf. Tickets are priced at $49 for balcony and $59 for stage floor seating.

"The First Tee is close to my heart," said Feherty, 61, a native of Bangor, North Ireland, who became a U.S. citizen in 2010 and now lives in Dallas. "I think it's an extremely important program in getting kids involved, especially under-priviledge children, and giving them the chance to see what the game is all about."

Pensacola has its own special place in the world with junior golf.

Led by Bubba Watson, one of the most recognized players today in professional golf, who is also an investor with the Pensacola Blue Wahoos, there are five men who played youth golf and high school golf in the Pensacola and rose to become multiple-tournament winners on the PGA Tour.

Jerry Pate, who worked with Feherty during CBS Sports golf telecasts, including The Masters, is a Booker T. Washington High grad who rose to become one of only 11 players in golf history to win the U.S. Amateur and U.S. Open. He also won Players Championship as part of eight PGA Tour wins.

Joe Durant, an Escambia High graduate, who walked to Osceola Municipal Golf Course to play as a kid, is a four-time PGA Tour winner with three more wins on the PGA Tour Champions where he now competes.

Boo Weekley and Heath Slocum were prep golf teammates at Milton High, several years before Bubba Watson came along, and both advanced to win a combined seven times on Tour. The two teamed to represent the U.S. in the 2007 World Cup golf championship.

"I am sort of familiar with that kind of phenomenon coming from Northern Ireland, where you had Graeme McDowell, Rory McIlroy and Darren Clarke over the last 20 years," said Feherty, during a recent interview. "It's special.

"I think there is something about the environment where (Pensacola area players) grew up that gives a feeling that they've got a chance."

During his work as on-course reporter during CBS Sports for 18 years and now NBC Sports and The Golf Channel since 2016, Feherty has gotten to know Watson and appreciate his talents.

In becoming a two-time Masters champion (2012, '14) as part of 12 PGA Tour wins, the 40-year-old Watson has earned his way into rare company in golf history.

Away from golf, Watson loves taking in Blue Wahoos games with his wife, Angie, and their two children. Watson enjoys being around other pro athletes and grew up loving baseball. When available, he's chatted with Blue Wahoos players during batting practice.

"Just his attitude in general, he's different. They broke the mold, to use a cliché, but really with him and Boo… they are unique. Bubba is such a complicated person.. It's difficult to know how his mind works, but it's really interesting to watch him play. He's one of my favorite players to watch."

Feherty's show at the Saenger Theater will include a oft-humorous look into his life.

He became an outstanding professional golfer during his era, winning 10 times as a pro, including five times on the European Tour. He finished tied for fourth in the 1994 British Open, tied for seventh at the 1991 PGA Championship.

He's authored more than a half-dozen books. He does a variety of TV programming now for NBC and The Golf Channel.

"The show is essentially a journey through my life interspersed with a lot of stories I have been told by other people," said Feherty, who will recount memories of his PGA Tour days with players like Jack Nicklaus, Arnold Palmer and Lee Trevino. "And if I don't tell these stories they are going to die. They are going to disappear into the ether."

Feherty will also address during the show how he's battled alcoholism and mental illness during his life. He will do it with his own colorful style.

"I've had my challenges with addiction and mental illness," said Feherty, who has five children. "With me, there is a funny side to that as well. You have to maintain a sense of humor, or you really stay out of your mind. I like to visit my mind every now and then.

"I just try to make people laugh and try to emphasis that I've had two different careers here.. One as a broadcaster and one as a comic and you can't mix them. I'll say things at this show that would get my (butt) fired in a heartbeat if I said it on national television.

"I hope people find it funny. If they don't, I at least insist they understand it's supposed to be a joke. People these days are inclined to take themselves far too serious."

The event presents a way to celebrate Pensacola's golf legacy with someone who is well-known across the globe. It's also a way to help the First Tee of Northwest Florida for future talent.

There has already been quite a path established.

WHAT: David Feherty Live Off Tour!

WHERE: The Saenger Theater, Palafox Street.