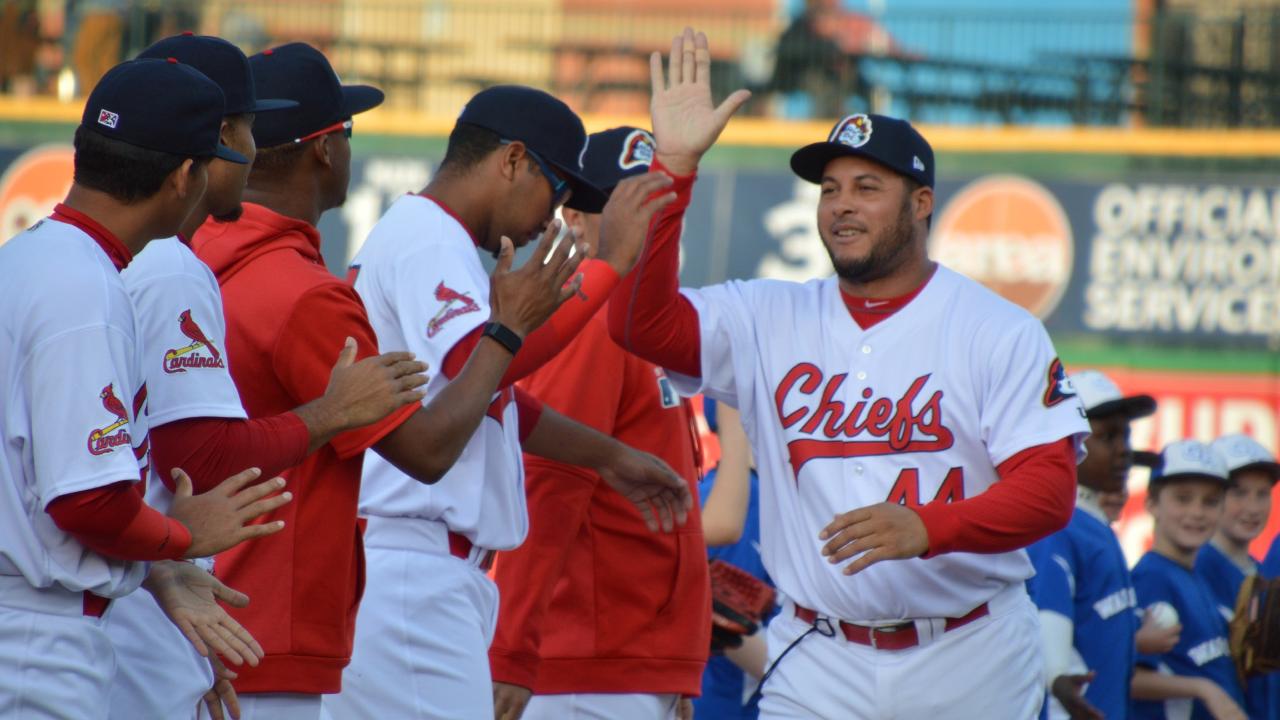 PEORIA, IL - The Peoria Chiefs and St. Louis Cardinals have announced the 2020 Chiefs field staff with 2019 skipper Erick Almonte returning for his second season at the helm. He will be joined by Peoria newcomers Pitching Coach Adrian Martin and Hitting Coach Cody Gabella, who both have experience in the Cardinals system. Athletic Trainer Chris Walsh and Strength & Conditioning Coach Kyle Richter both return to the Chiefs staff and a fourth coach will be announced at a later date.

Almonte, who turns 42 in February, returns to the Chiefs as the 10th manager in team history to be in charge for at least two straight seasons. A native of Santo Domingo, Dominican Republic, Almonte became the first manager in Chiefs history to be born outside the United States, and the 14th to have played in the Majors when he led the Chiefs to a 54-85 record in 2019. He managed the GCL Cardinals in 2018, going 40-16 with a loss in the Gulf Coast League Championship Series. In 2017 he served as the hitting coach for High-A Palm Beach under former Chiefs skipper Dann Bilardello. The 2017 Palm Beach team was declared Co-Champions of the Florida State League after Hurricane Irma ended the season prematurely. Almonte was a coach for the Dominican Summer League Cardinals from 2014-16.

As a player Almonte signed with the New York Yankees as an 18-year old in 1996 and made his pro debut in 1997 with the GCL Yankees. A shortstop, Almonte worked his way up the Yankees organization playing for Greensboro (Low-A), Tampa (High-A), Norwich (Double-A) and Columbus (Triple-A) before making his MLB debut on September 4, 2001. He made his MLB debut in Toronto and singled in his first at-bat, against former Cardinals ace Chris Carpenter. Almonte played in eight games in 2001 for the Yankees going 2-for-4 with a double and two stolen bases. He returned to the Majors in 2003 when Derek Jeter was injured and hit .260 in 31 games with a homer, six doubles, 11 RBI and 17 runs scored. Almonte spent the 2004 season with the Triple-A Colorado Springs Sky Sox in the Rockies system before signing with the Cleveland Indians in November 2004. He never played in the Indians system and was sold to the Hokkaido Nippon Ham Fighters in Japan's Pacific League for the 2005 season. He played independent ball in 2006 before signing with the Detroit Tigers. He played two seasons for the Tigers on Double-A Erie and Triple-A Toledo before signing with the Milwaukee Brewers. He played for the Triple-A Nashville Sounds from 2009-2012, earning a 16 game call up to Milwaukee in 2011. Almonte played the 2013 season for the Aguascalientes Rieleros in the Mexican League before retiring and going into coaching. Overall he played in 1302 Minor League games batting .272 with 105 home runs, 215 doubles, 634 runs scored, 612 RBI and 84 stolen bases. In 55 Major League games he hit .233 with two homers, seven doubles, 18 runs scored and 14 RBI. Though he never appeared in a playoff game, every year Almonte played in the Majors his team made the playoffs: 2001 Yankees (lost in World Series), 2003 Yankees (lost in World Series), 2011 Brewers (lost in NLCS)

Almonte was the first player ever placed on the MLB concussion-based 7-day disabled list, on April 26, 2011 and he never played in another MLB game. Coincidentally, both of his MLB home runs came on April 2, eight years apart. He homered April 2, 2003 in Toronto off Pete Walker and then for Milwaukee on April 2, 2011 in Cincinnati off Travis Wood. His brother Hector pitched in the Majors in 1999 and 2003 for the Florida Marlins, Boston Red Sox and Montreal Expos.

Martin, 35, moves up to the Chiefs after two seasons with the State College Spikes in the New York-Penn League and this will be his fourth season as a coach in the Cardinals organization. Before joining State College in 2018, Martin was a coach for the Pacific Coast League Champion Memphis Redbirds in 2017. He was drafted by the Toronto Blue Jays in the 19th round of the 2003 draft and pitched seven seasons in MiLB and 12 seasons of professional ball including part of a season with the San Francisco Giants. Martin pitched in the MWL with the Lansing Lugnuts during the 2005, 2006 and 2007 seasons with 51 total appearances. He pitched at Dozer Park twice out of the bullpen with one appearance each in 2006 and 2007. Martin made it to Triple-A Las Vegas for five outings in the 2009 season. Overall he was 36-16 with 11 saves and a 3.74 ERA in 200 MiLB outings that covered 530 innings. Martin was drafted out of South Fork High School in Stuart, FL and current resides in Tampa, FL with his wife Emmie and son Maddux.

Gabella, 28, is beginning his fifth season with the Cardinals organization and first with the Chiefs. Last year he was the hitting coach for the Short Season-A State College Spikes, a year after serving in the same position for Rookie Level Johnson City. While Gabella was with Johnson City in 2018, the Cardinals led the Appalachian League with 75 home runs in 68 games. Gabella joined the Cardinals in 2016 and worked two seasons as the GCL Cardinals hitting coach with the team setting a franchise record in home runs in 2017 and winning a GCL Championship in 2016. Before joining the Cardinals he worked as a coach with the independent Watertown (NY) Bucks in 2015. Gabella grew up in Burlington, IA, attending both Notre Dame High School and Southeastern Iowa Community College while his father Jim was the manager of the Bees. He was drafted by the Braves out of high school in 2010 and signed with the Padres after being drafted out of college in the 43rd round of the 2011 draft. Gabella played in 47 games in the Padres system from 2011-12 reaching as high as High-A Lake Elsinore but he never played in the Midwest League. Gabella currently resides in Orlando, FL with his wife Cassandra and their son Devin.

Walsh enters his second year as the Peoria Chiefs Athletic Trainer and his fourth year in the Cardinals Organization. Prior to joining the Chiefs, Walsh was the Athletic Trainer for the GCL Cardinals. A native of Caledon, Ontario, Canada, Walsh has lived in four countries. He attended Acadia University and Sheridan College earning a Bachelors of Kinesiology and Bachelors of Applied Health Sciences. Before working for the Cardinals, Walsh completed internships with the Detroit Tigers and Toronto Marlies (AHL) while also working for the Guelph Storm OHL hockey club and the Ontario Blue Jays baseball club.

Richter is in his second season as the Chiefs Strength and Conditioning Coach after working in the same position in 2018 for the Johnson City Cardinals. A native of Orange County, California, Richter was drafted by the Colorado Rockies in the 44th round of the 2010 draft but did not sign. He graduated from the University of Southern California with a Bachelors in Human Performance and a minor in Occupational Therapy. Richter pitched for USC's baseball team in 2011 & 2012 and is an avid golfer, competing in Long Drive events. He worked in the private sector for three years in Sports Performance before joining the Cardinals and currently resides in Nashville, Tennessee in the off-season.

Season ticket packages and group tickets for the 2020 season are currently on sale by calling 309-680-4000. The 2020 season kicks off April 9 in Davenport, Iowa with the home opener against the Beloit Snappers set for Monday, April 13 at 6:35 p.m. Individual game tickets will go on sale in early March. Fans can keep up with all Chiefs news during the offseason online at www.peoriachiefs.com and on twitter or instagram: @PeoriaChiefs.