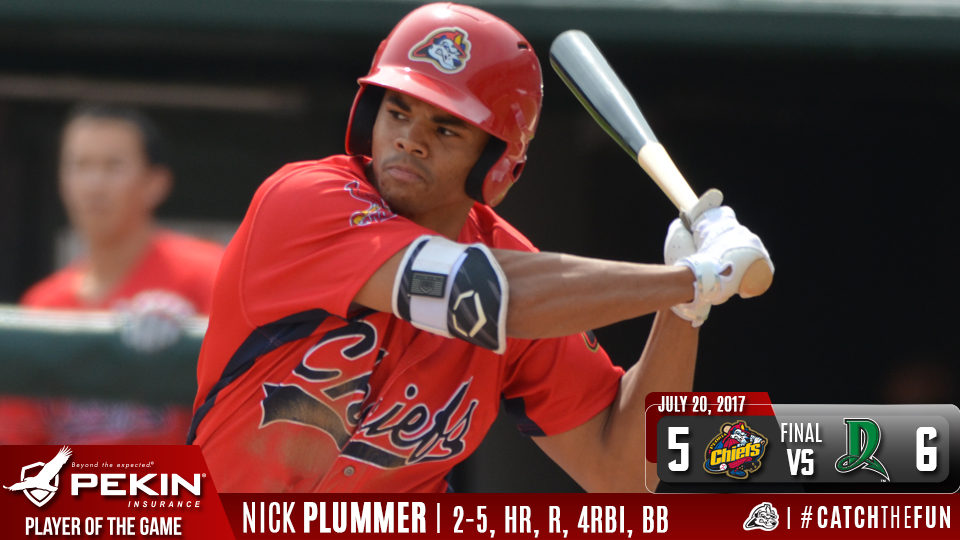 The Peoria Chiefs lost leads of 4-0 and 5-4 before being walked off on two straight dropped fly balls in the bottom of the 13th Thursday night in a 6-5 loss to the Dayton Dragons. The loss drops the Chiefs to 15-12 in the second half and 45-51 overall as they attempt to avoid being swept Friday night.

Dayton, OH - The Peoria Chiefs lost leads of 4-0 and 5-4 before being walked off on two straight dropped fly balls in the bottom of the 13th Thursday night in a 6-5 loss to the Dayton Dragons. The loss drops the Chiefs to 15-11 in the second half and 45-51 overall as they attempt to avoid being swept Friday night.

The game was scoreless into the third when the Chiefs scored against Dayton starter Mike Blandino. JR Davis led off with a walk and was replaced on the bases by Kramer Robertson on a fielders' choice. Robertson stole second and the Chiefs took a 1-0 lead on a single by Stefan Trosclair.

The Chiefs added on in the fourth. Dylan Carlson led off with a single and moved to second on a single by Brian O'Keefe. With two outs Nick Plummer launched his third home run of the season to right-center field for a 4-0 Chiefs lead.

For the second night in a row the Chiefs lead vanished in the bottom of the sixth. Frederis Parra gave up a lead off double to Michael Beltre and with one out Bruce Yari doubled to right to get the Dragons on the board. Keaton Siomkin took over for Parra and gave up a double to John Sansone as the Dragons cut the lead to 4-2. Siomkin left with an injury with two down and Brian Dobzanski took over. Dayton tied the game when former Cardinals Minor Leaguer Malik Collymore hit his second homer of the season to left field.

The Chiefs regained the lead in the eighth against reliever Jesse Stallings. O'Keefe led off with a single and moved to second on a sacrifice bunt. Plummer singled up the middle with two outs to put the Chiefs on top 5-4.

Dayton rallied again in the bottom of the inning. Sansone singled off Dobzanski and with two outs Hector Vargas doubled to right off Yeison Medina to tie the game. The Dragons loaded the bases against Medina with no outs in the ninth but the next three batters struck out to send the game to extras.

The Chiefs loaded the bases with two outs in the 13th but couldn't score. Reliever Max Almonte recorded the first two outs in the bottom of the inning before Plummer and Carlson collided in right-center field allowing Trammell to reach second base as the winning run. Yari lifted a fly ball to left that could have ended the inning but the ball hit off Mick Fennell's glove as Trammell scored the game winning run. Both Carlson and Fennell were charged with errors in the 13th.

Notes… Plummer knocked in a career-high four runs…O'Keefe collected a career-high four hits and now has 194 hits in a Chiefs uniform, good for 14th on the franchise list…The Chiefs have allowed nine runs in the sixth inning in the series while losing leads of 5-2 and 4-0…Medina and Dobzanski both had their first blown saves of the season…Dobzanski had not allowed an earned run in the second half of the season as a reliever…Parra threw a season-high 75 pitches…The Chiefs are 1-6 on the road against the East this season and 7-12 overall…The Chiefs are 2-16-1 in the East the last two seasons…The Chiefs are 60-39 all-time against the Dragons with the .612 win percentage the best against any MWL franchise…Peoria is 27-24 all-time at Fifth Third Field which opened in 2000…The Chiefs are 24-10 when scoring five runs or more but 8-33 when allowing at least five…Peoria has not won a game in extra innings on the road this season…The series continues Friday at 7:07 p.m. ET as the Chiefs send LH Austin Warner (MWL Debut) to the mound against Dragons RH Alex Webb (0-0, 1.93)… The broadcast can be heard, starting with the pregame show at 5:50 p.m. CT on www.peoriachiefs.com/listenlive which also has downloads for a free app on the iPhone, iPad, Blackberry, and Android… The broadcast is also available on the Peoria Chiefs Radio Network in the Tune-In Radio App.