Fennell drives in four in win 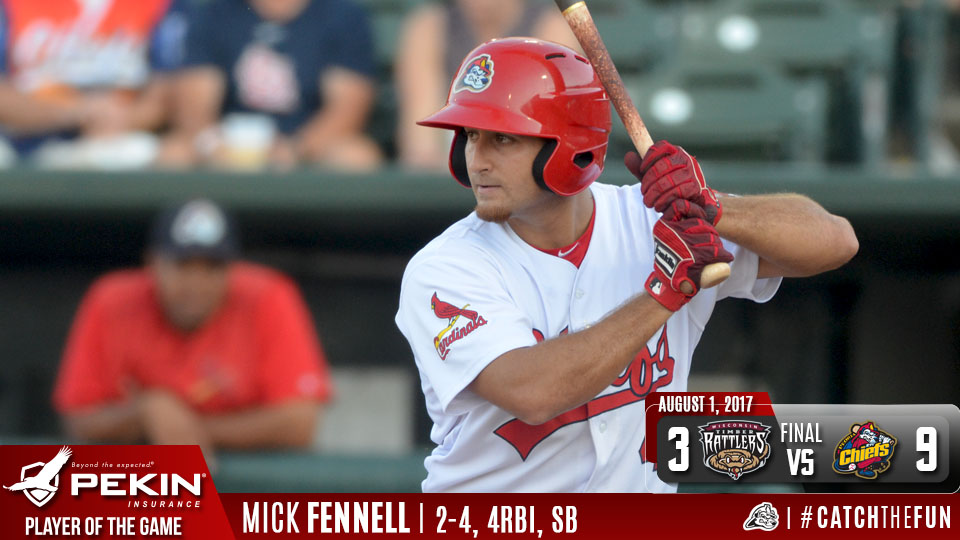 Peoria, IL- Mick Fennell had a career-high four RBI, propelling the Peoria Chiefs to a 9-3 victory over the Wisconsin Timber Rattlers in the series finale on Tuesday night. The Chiefs improve to 22-16 in the second half and 52-55 overall and will begin a three-game series with the Beloit Snappers on Wednesday at Pohlman Field with a 7:00 p.m. first pitch.

The Timber Rattlers got on the board in the first against Chiefs starter Frederis Parra. Demi Orimoloye led off with a single to the left-side of the infield and Zach Clark singled to left. Parra got Keston Hiura to fly-out to center and We

ston Wilson popped out to short, but Orimoloye scored when Mario Feliciano singled to left to give Wisconsin a 1-0 lead.

Wisconsin added to their lead in the fourth inning with a two-run homer. With one out Parra walked Feliciano and Gideon homered to left, just out of the reach of Vince Jackson who scaled the wall. It was Gideon's second homer in as many games and gave the Rattlers a 3-0 advantage.

The Chiefs got even in the fourth against Rattlers starter Josh Pennington and reliever Nattino Diplan. Danny Hudzina led off with a single to left against Pennington to end his night, and Juan Yepez singled to center off Diplan. Dylan Carlson walked to load the bases and Mick Fennell grounded out to the second baseman, plating Hudzina. Juan Yepez scored on a wild pitch, and J.R. Davis grounded out to third to score Carlson and make it a 3-3 game.

The Chiefs took the lead in the lead against Wisconsin with Diplan and Carlos Herrera on the mound. Diplan hit Hudzina with a pitch, and he moved to second on a passed ball. With two outs Fennell bunted on the third-base side of the field, beating the throw at first and scoring Hudzina to put Peoria up 4-3.

Peoria extended their lead in the seventh against Herrera and Andrew Vernon. Nick Plummer led off with a walk and Stefan Trosclair was hit by a pitch. Jackson flew out to center field and both runners tagged with Plummer moving to third, but Trosclair was thrown out at second for the second out. Ryan McCarvel roped a double to left field, driving in Plummer to give the Chiefs a 5-3 lead. Hudzina walked and Yepez drove McCarvel in with a double to left to give the Chiefs a three-run advantage. During Carlson's at-bat, Herrera left the game with an injury. Vernon entered with a 3-1 count and walked Carlson with his first pitch. Fennell singled to shallow-right field in the next at-bat to drive in Hudzina and Yepez to give the Chiefs an 8-3 lead.

Kramer Robertson added to the Chiefs lead in the eighth with Vernon on the hill. With one out, Robertson pinch-hit for Trosclair and drove a solo-home run over the left field wall to extend the lead to 9-3. The homer was Robertson's third of the year in his first pinch-hit appearance as a professional.

Parra (3-3) threw six innings in a win, allowing three runs on eight hits with two walks and two strikeouts. Ronnie Williams earned his fourth hold of the season, throwing two innings without allowing a run or a hit with four strikeouts. Max Almonte threw a perfect ninth with two strikeouts.

Notes… Carlson's nine-game hit streak was snapped, but he has a 10 game on-base streak… Yepez had his 11th multi-hit game of the season and his second three-hit game… Fennell has five multi-hit games this season… Fennell's four RBI night was a career high and the Chiefs fifth such night this season… Robertson's home run was the Chiefs 100th as a team this season and the sixth time Peoria has reached the mark in franchise history… The homer was the first base-hit for a Chiefs pinch hitter this season… Tuesday was the first time Robertson was not in the starting lineup after starting the last 22 games for the Chiefs to begin his professional career… With his pinch-hit homer in the eighth, all three of Robertson's homers have been hit at Dozer Park… Hudzina started at shortstop for the first time this season… Parra has allowed a run in the first inning in two-straight starts… Parra had his second quality start of the season and it's Peoria's 41st of the year… The Chiefs are 29-25 at Dozer Park this season… Peoria leads the season series with Wisconsin 6-5, with a three-game series left on August 22-24… The Chiefs head to Beloit to take on the Snappers for a three games series on Wednesday with a 7:00 p.m. first pitch… Peoria will send LH Austin Warner (1-1, 3.38 ERA) to the mound and Beloit will start LH Zack Erwin (4-2, 1.85 ERA)… The broadcast can be heard, starting with the pregame show at 6:45 p.m. on www.peoriachiefs.com/listenlive which also has downloads for a free app on the iPhone, iPad, Blackberry, and Android… The broadcast is also available on the Peoria Chiefs Radio Network in the Tune-In Radio App.