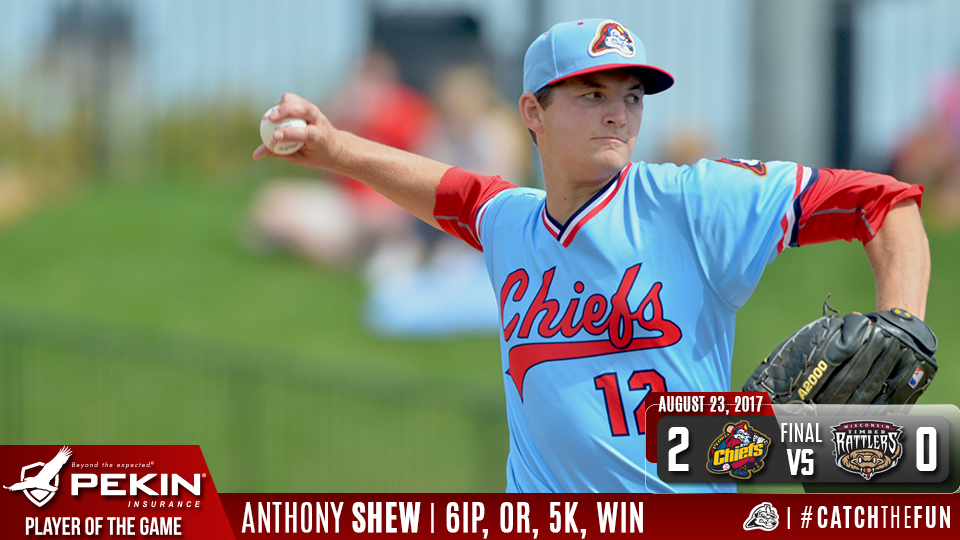 Appleton, WI - The Peoria Chiefs scored twice in the third inning and held off the Wisconsin Timber Rattlers for a 2-0 win on Wednesday night to snap a two-game losing streak. The win moves the Chiefs to 31-28 in the second half with 11 games remaining and they lead Beloit by 2 ½ games in the Wild Card race.

The Chiefs started the game with a bang as Nick Plummer led off with a triple that deflected off the glove of right fielder Demi Orimoloye. But Rattlers starter Thomas Jankins got Kramer Robertson to hit a grounder to third and Plummer was thrown out at the plate by Dallas Carroll. Robertson moved to second base but was stranded as the game stayed scoreless.

Peoria struck in the third inning, with help from Wisconsin's defense. Matt Fiedler doubled off the center field wall to start the inning and moved to third on a wild pitch with one out. Plummer drew a walk and Robertson hit a ground ball to third that could have been an inning-ending double play. However Carroll's throw to second went into right field as Fielder scored and Plummer advanced to third. With Brian O'Keefe at the plate, Robertson broke for second but Plummer was thrown out at the plate on the delayed double steal. With two down O'Keefe doubled to left-center, his 20th of the season, to score Robertson and put the Chiefs on top 2-0.

Anthony Shew kept Wisconsin off balance all night. They had just two runners past first base in the first five innings as Orimoloye reached third on an error with two outs in the third and Zach Clark doubled with one out in the fifth. Shew gave way to the bullpen in the seventh and Wisconsin managed just one hit, a leadoff single in the ninth, as the Chiefs preserved the shutout.

Shew (3-0) earned the win as he allowed five hits and walked two over six shutout innings. He struck out five and tossed his third quality start in his last four outings. Leland Tilley threw two perfect innings with two strikeouts for his first hold of the season. Yeison Medina earned his eighth save in 11 chances as he allowed a single and struck out two in one inning.

Notes…Each of the last two Chiefs wins have been by 2-0 scores with a Sunday win over Clinton at home and Wednesday's win in Appleton…The Chiefs have 10 shutouts on the season…This is the fourth year in a row and 14th time in team history the Chiefs have recorded 10 or more shutouts…O'Keefe moved into a tie for fourth on the Chiefs career doubles list with 53 as he matched Bill Merrifield (1983-84)…He also tied Richard Canan for fifth with 970 plate appearances and passed Canan for fifth on the hits list with 223…Shew has won consecutive starts for the first time with the Chiefs…Tilley earned his first hold…He has retired the first batter faced in eight of nine appearances and has not allowed a run in 14 innings…The Chiefs had their first game without at least two errors since Friday…The triple was Plummer's first of the season to go along with nine doubles…Fiedler and O'Keefe both had two hits with a single and a double…With 11 games left, seven at home, the Chiefs lead Beloit by 2 ½ games, Clinton by four, Wisconsin by five and Burlington by six in the Wild Card race…The Chiefs hold the tiebreaker over Beloit, Clinton and Burlington…The Chiefs are 7-6 against Wisconsin with one game left…The Chiefs have outscored the Rattlers 63-62 in 13 games and whoever wins on Thursday will hold the tiebreaker…Thursday's game starts at 7:05 p.m. as the Chiefs start LH Ian Oxnevad (3-10, 4.28) against a yet to be named Rattlers hurler…The broadcast can be heard, starting with the pregame show at 6:50 p.m. on www.peoriachiefs.com/listenlive which also has downloads for a free app on the iPhone, iPad, Blackberry, and Android… The broadcast is also available on the Peoria Chiefs Radio Network in the Tune-In Radio App.