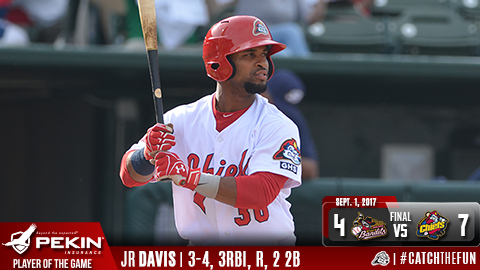 Peoria, IL - J.R. Davis drove in three runs with three hits as the Peoria Chiefs completed a three-game sweep of the Quad Cities River Bandits 7-4 on Friday night in their final home game of the regular season. The Chiefs are 37-30 in the second half and head to Kane County to finish the regular season with a three-game series this weekend.

The Chiefs scored the first run of the game against Quad Cities starter Cristian Javier in the second inning. With two outs, Dennis Ortega walked and Mick Fennell singled to left to give Peoria runners at first and second. Davis plated Ortega with a double to right, giving the Chiefs a 1-0 lead.

Quad Cities tied the game in the fourth against Chiefs starter Frederis Parra. Wander Franco singled to center and Chas McCormick singled to left, giving the Bandits runners at first and second. With one out Kristian Trompiz singled to right to score Franco, who beat Dylan Carlson's throw to tie the game at 1-1.

Peoria broke the game open in the sixth against River Bandits reliever Devon Carr. Juan Yepez led off with a single, Carlson walked and both scored when Davis doubled to right with two outs to give the Chiefs a 3-1 lead. Nick Plummer singled to left and drove in Davis, increasing the Peoria to 4-1. Kramer Robertson walked and Evan Mendoza singled to right field, scoring Plummer and extending the Peoria lead to 5-1 while Robertson moved to third. The Chiefs executed a double steal for the second straight night with Mendoza taking second and Robertson stealing home to give the Chiefs a 6-1 cushion.

Peoria padded their lead in the eighth inning against Bandits reliever Jesus Balaguer. With two outs Mendoza homered to deep left field to extend Peoria's lead to 7-1. The long ball was Mendoza's first with the Chiefs after he hit three with State College this year. Quad Cities scored three runs in the ninth to cut the Chiefs lead to 7-4.

Notes… The Chiefs gave out their end-of-season awards pregame, with former Chiefs pitcher Mike O'Reilly winning Pitcher of the Year, Stefan Trosclair won the MVP award, and Carlson won the Ryne Sandberg Award… Mendoza has a five-game hit streak… He had his third multi-hit game, and first three-hit game with Peoria… Davis has 26 multi-hit games and six three-hit games… Parra threw his fifth quality start of the season, and the 55th of the season for the Chiefs… Ortega has thrown out three of six base stealers… The Chiefs have hit 117 team home runs this season… Peoria finishes the season 25-23 in their white uniforms at home this season…The Chiefs end their home schedule 38-31 in the regular season… Peoria finished the season series with Quad Cities 8-9… The Chiefs are 45-25 when they score first… Peoria has swept five series this season and it's their first sweep since July 5-7 against Beloit… The final series of the regular season begins on Saturday at 6:30 p.m. as the Chiefs head to Kane County…The Chiefs will start LH Austin Warner (2-3, 2.93 ERA) while the Cougars send RH Sam McWilliams (11-6, 2.89 ERA) to the mound… The broadcast can be heard starting with the pregame show at 6:15 p.m. on www.peoriachiefs.com/listenlive which also has downloads for a free app on the iPhone, iPad, Blackberry, and Android… The broadcast is also available on the Peoria Chiefs Radio Network in the Tune-In Radio App.