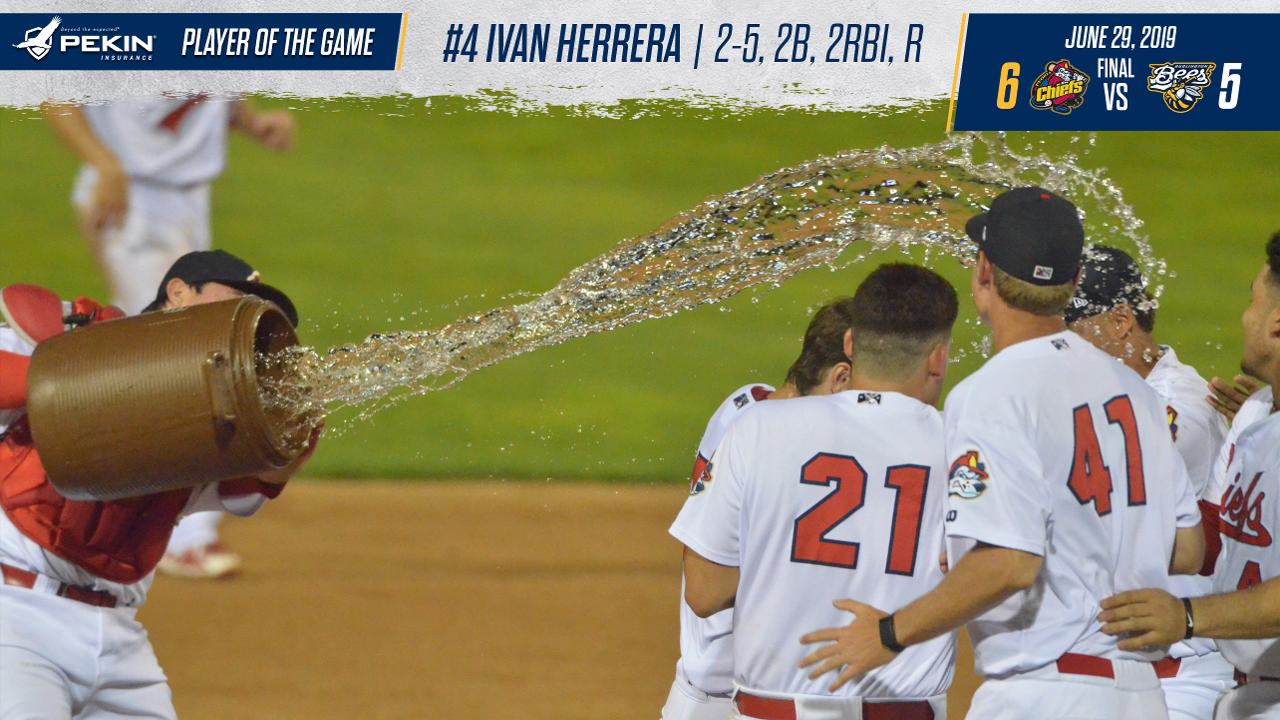 Peoria, IL - After scoring four runs in the bottom of the ninth to force extra innings, Brandon Riley hit a walkoff single in the bottom of the 11th to give the Peoria Chiefs the win over the Burlington Bees 6-5 Saturday night at Dozer Park. The Chiefs improve to 3-6 in the second half with four games left in the homestand.

After four scoreless innings, the Bees struck first in the top of the fifth against Chiefs starter Alvaro Seijas. Connor Fitzsimons hit a solo homerun to lead off the inning for the 1-0 lead.

After being held hitless through the first five innings, the Chiefs broke through against Bees starter Luis Alvarado. With one out, Brandon Benson hit a solo homerun, his third of the season, to tie the game at one.

Burlington regained the lead in the top of the ninth knocking Peoria reliever Parker Kelly out of the game. A single with runners at the corners, a wild pitch and a bases loaded hit by pitch gave the Bees a 4-1 lead. Tommy St. Clair entered in relief and issued a walk with the bases loaded to push the Bees lead to 5-1 before inducing a bases loaded groundout to end the inning and threat.

Peoria rallied to tie the game in the bottom of the ninth knocking Burlington reliever Parker Joe Robinson out of the game. Josh Shaw led off with a single and Delvin Perez was hit by a pitch. With runners on first and second, Ivan Herrera hit a double to center field, scoring Shaw and Perez to cut the deficit to 5-3. After Yepez was walked by Luke Lind, Leandro Cedeno hit a bloop single to load the bases. Herrera scored as Brandon Riley reached on a fielding error and Brandon Benson drew a two-out walk with the bases loaded to tie the game at five.

The Chiefs walked off in the bottom of the 11th for their third win in the second half. With Brady Whalen starting at second, Cedeno singled to put runners at the corners and Riley hit a walkoff single to give the Chiefs the 6-5 win.

The Chiefs continue their series against the Burlington Bees Sunday at 6:35 p.m. Peoria will start RH Kyle Leahy (4-4, 2.56) against Burlington RH Kyle Tyler (3-0, 3.94). The broadcast can be heard, starting with the Pre-Game Show at 6:15 p.m. on the Peoria Chiefs Tune-In Page, which is free and also has a free app for smartphones and tablets. The game is also available on MiLB.tv to subscribers.