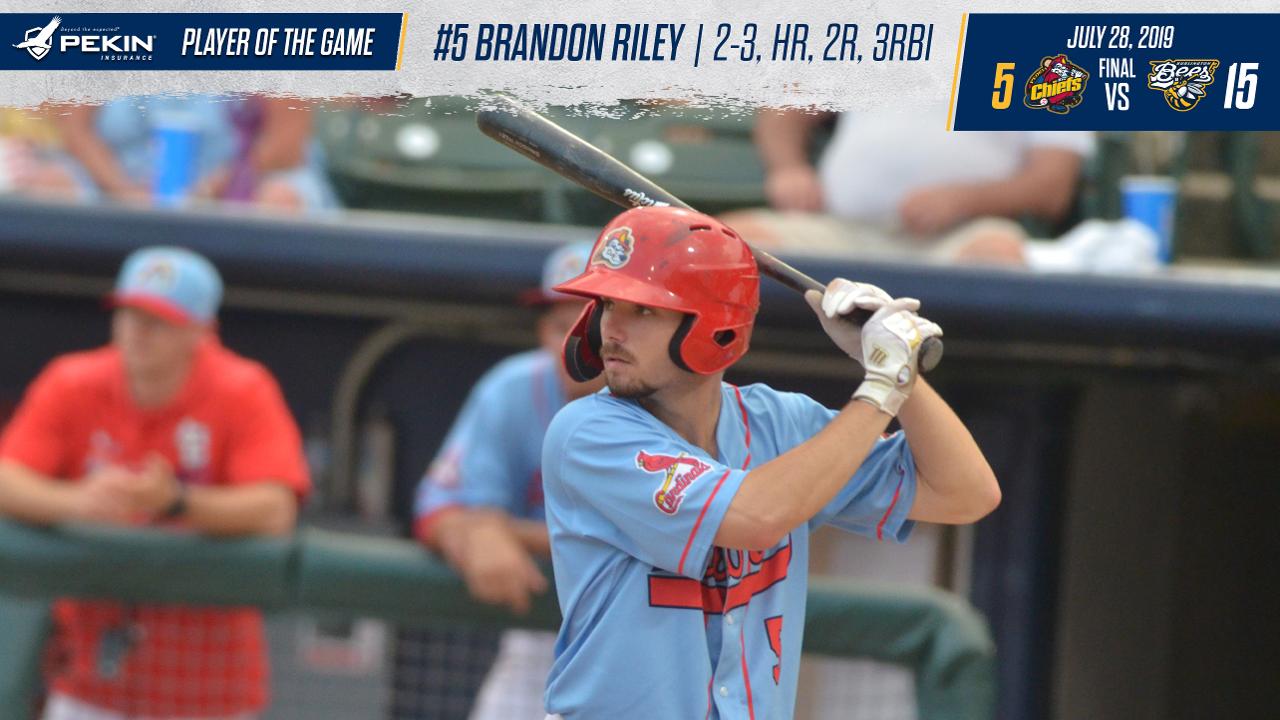 Peoria, IL - The Peoria Chiefs got a strong start from Kyle Leahy, but two bad innings led to a 15-5 loss against the Burlington Bees Sunday night. Brandon Riley went two-for-three with a three-run homerun and was named the Pekin Insurance Beyond the Expected Player of the Game.

The Chiefs opened the scoring in the bottom of the second against Burlington starter Cole Duensing. Imeldo Diaz and Riley singled to start the inning. With runners on first and second, Alexis Wilson drew a walk to load the bases and Wadye Ynfante hit a sac fly to score Diaz for the 1-0 lead. Josh Shaw drew a walk to re-load the bases and Riley scored on a wild pitch to give the Chiefs a 2-0 lead.

Peoria added to their lead in the bottom of the third inning. Brendan Donovan led off with a walk and Brady Whalen singled up the middle to put runners on first and second. With one out, Brandon Riley blasted a three-run homerun, his first of the season to give the Chiefs a 5-0 lead.

Leahy took a no-decision, pitching five innings allowing one run on three hits with three walks and six strikeouts. Rodard Avelino (0-3) took the loss allowing five runs and issuing four walks and one hit by pitch in a third of an inning pitched.

The Chiefs conclude their series against Burlington Monday at 6:35 p.m. with Half Price Ticket Monday. All tickets are half price with $7.50, $6.50, $5.50, and $4.50 ticket options. The broadcast can be heard, starting with the Pre-Game Show at 6:20 p.m. on the Peoria Chiefs Tune-In Page, which is free and also has a free app for smartphones and tablets. The game is also available on MiLB.TV for subscribers.

Tuesday, July 30 the Chiefs open a four-game series with the Kane County Cougars at Dozer Park and it's Taco Tuesday with $2 Tacos at the concession stands. It's also Thanks For Your Service Tuesday where Veterans and All First Responders receive up to four (4) tickets at $3 each with a valid ID. Plus Humana Silver Sluggers get one (1) ticket to every Tuesday home game. Fans 55 and older can sign up to be a Humana Silver Slugger by filling a form at the front desk or by calling 309-680-4000. Wednesday, July 30 is a Guaranteed WINSday at Dozer Park with first pitch at 6:35 p.m. The Chiefs are guaranteeing their fans a win over the Kane County Cougars. If the Chiefs do not win, all fans can exchange their tickets for a free home game in August. There are also postgame fireworks from Central States Fireworks and a Pitch-In for Charity to benefit the Mid Illini Bandits 12U. It's also a CityLink Bang For Your Buck Wednesday with dollar hot dogs, popcorn and ice cream.