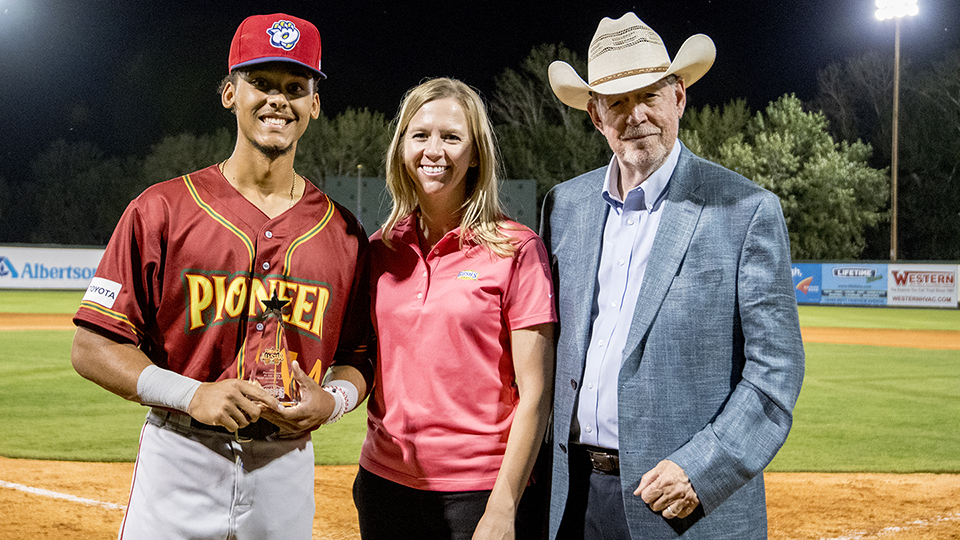 BOISE, Idaho -- The Pioneer League brought the lumber to Memorial Stadium, hitting the home run cycle -- solo, two-run, three-run and grand slam -- to survive a back-and-forth offensive battle and take home its second straight All-Star crown with an 11-7 triumph over the Northwest League.

"We were swinging it today," said Pioneer League Top Star Jeremiah Jackson, whose third-inning slam was the first homer of the night. It was followed by Eric Yang's solo shot and Jon Littell's three-run tater -- both in the sixth -- and Sam McWilliams' two-run blast in the eighth in front of 3,873 fans.

"Everyone was going to swing hard today," Yang said. "We wanted to hit some bombs. I told myself I wasn't going to take a strike today. So, trying to get my hacks off, I just ran into one."

The Northwest League opened the scoring in the second on a two-run double by Eugene's Chase Strumpf. The lead did not last long as as Everett right-hander Damon Casetta-Stubbs sandwiched a single between a pair of walks and followed Christian Koss' RBI groundout by hitting Andy Pages to set the stage for Jackson.

"A 1-1 count, All-Star Game, so you got out there and do what you do, show what you got," said Jackson, the Angels' No. 5 prospect. "He laid a fastball right there for me and I was able to get a good swing on it."

The NWL regained the lead with a four-run fifth. Frick singled in a run for his second hit of the night, Spokane's Blaine Crim delivered a two-run knock and Everett's Trent Tingelstad followed with an RBI single. Crim went 3-for-4 to earn him Top Star honors for the Northwest League.

"It was great to be here with the best guys around the league and just have fun for a night," said Crim, a 19th-round pick in this year's Draft. "Definitely worth the trip. I didn't know I was going to play the whole game, that was definitely a shock. The Home Run Derby didn't go my way, so I was just trying to find my swing a little bit. The first couple of at-bats were tough. I was just happy to put some barrels on some balls."

Again, the lead vanished quickly because Yang and Littell did their damage in the following frame. With Hillsboro right-hander Marcos Tineo on the mound, Yang led off with a blast to left to knot the game at 6-6.

Littell's three-run no-doubter put the Pioneer League ahead for good on its way to a second straight win in the midseason classic.

"We knew these guys wanted to show of their arms, so I just tried to get a good fastball to hit and hit it early in the count," he said. "I got a good one that I could put a pretty good swing on."

McWilliams' two-run shot in the eighth extended the lead to 11-6, but the NWL got back a run in the bottom of the frame when Vancouver's Trevor Schwecke doubled home Boise's Bladimir Restituyo.

Each starting pitcher, Salem-Keizer righty Kervin Castro and Great Falls southpaw Avery Weems, turned in a perfect inning. Boise righty Jacob Wallace, the Rockies' third-round pick this year, struck out the side in the ninth. Missoula righty Patrick McGuff got the win, despite allowing four runs -- three earned -- on five hits and a walk with three punchouts in 1 2/3 frames.

Sean Roby, a last-minute addition to the pregame Home Run Derby, saved his power for the end of both rounds to capture the championship belt and the NWL's fourth title in five tries. With 18 homers in the finals, the Salem-Keizer infielder outlasted first-round leader Colin Simpson of Grand Junction, who connected for 14.

Roby, who has one regular-season homer, smacked nine in the first round, most coming in a streak near the end of his turn. Simpson matched his season total with 12 in the first round, easily advancing over Pioneer League teammates Michael Emodi of Idaho Falls, who hit seven; and Ogden's Andy Pages, who launched three. Tingelstad hit seven in the first round and Crim belted a pair.