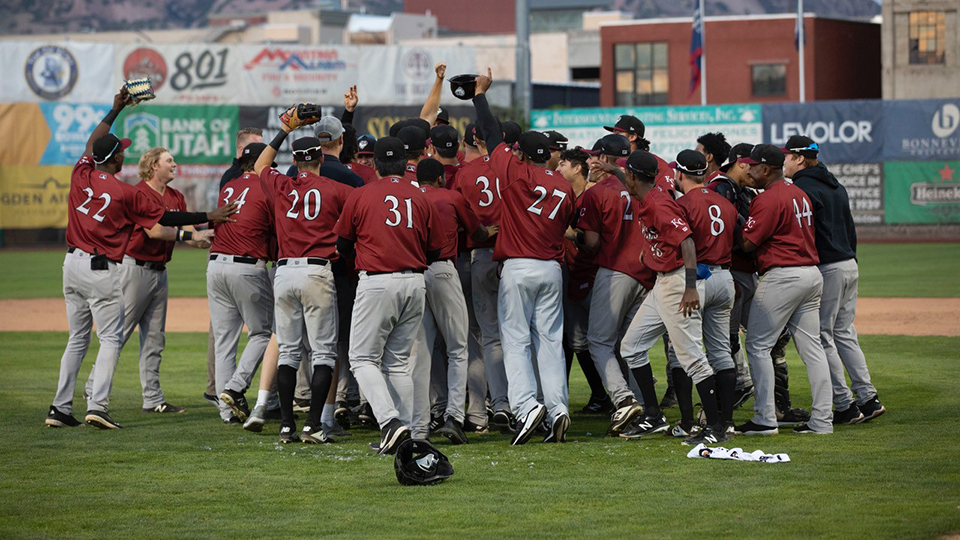 After dropping the opening game of the Pioneer League Finals, Idaho Falls needed back-to-back road wins against an Ogden team that tied the league record with 54 regular-season victories.

Thanks to some timely hitting by Tyler Tolbert and Isaiah Henry, the Chukars did just that.

Tolbert collected three hits and scored three times, while Henry homered, doubled and scored twice as Idaho Falls slugged its way to a 10-8 victory over the Raptors on Sunday at Lindquist Field for its first Pioneer League championship since 2013.

The Chukars became the third Royals affiliate to win a title in the last three days, joining Lexington in the South Atlantic League and Wilmington in the Carolina League.

"The guys were unbelievable," Chukars manager Omar Ramirez said. "I knew when we faced Ogden it was going to be tough. But we wanted it more than them."

Idaho Falls opened the third inning with four straight hits off Ogden starter Elio Serrano. Henry led off the frame with a double and scored one batter later on a double by Stephan Vidal. Tolbert singled in Vidal and came home on another double by Jose Marquez to open a 3-0 lead. The Chukars chased Serrano (0-1) and never looked back.

Idaho Falls added four runs in the fifth on two-run doubles by Travis Jones and Jimmy Govern. The Raptors did not go quietly, responding with five runs in the bottom of the inning as Zac Ching slugged a three-run homer.

An error and a sacrifice fly brought in two more runs for the Chukars in the sixth, but Ogden climbed within 9-8 in the bottom of the frame as Jimmy Titus delivered a two-out two-run single.

Henry wasn't done. The 20-year-old outfielder clubbed a solo homer in the seventh off right-hander Mark Mixon, capping a postseason in which he hit .333 (7-for-21) with two dingers, four RBIs and six runs scored in six games.

"He's had a great playoff series," Ramirez said. "I know he struggled in the regular season, but in the playoffs he came through for us."

Derrick Adams (1-0) came on with one out in the fifth and got the win, despite allowing three runs on four hits over 1 1/3 innings. Jonah Dipoto -- the son of Mariners general manager Jerry Dipoto -- pitched two scoreless frames for his first playoff save, striking out Wladimir Chalo to set off the celebration.

"Games like this aren't about talent, Ramirez said. "They're about heart and playing good baseball. My guys did that.

"Our guys showed so much heart throughout the year. Taking two games from Ogden, that says a lot about my guys. My guys weren't afraid of them."

Royals No. 20 prospect Alec Marsh started for the Chukars and yielded three runs on six hits with two walks and four strikeouts in 4 1/3 innings.

Vidal and Rhett Aplin both chipped in two hits for Idaho Falls.

Titus, Andrew Shaps and Marco Hernandez had two hits and two RBIs apiece for the Raptors.