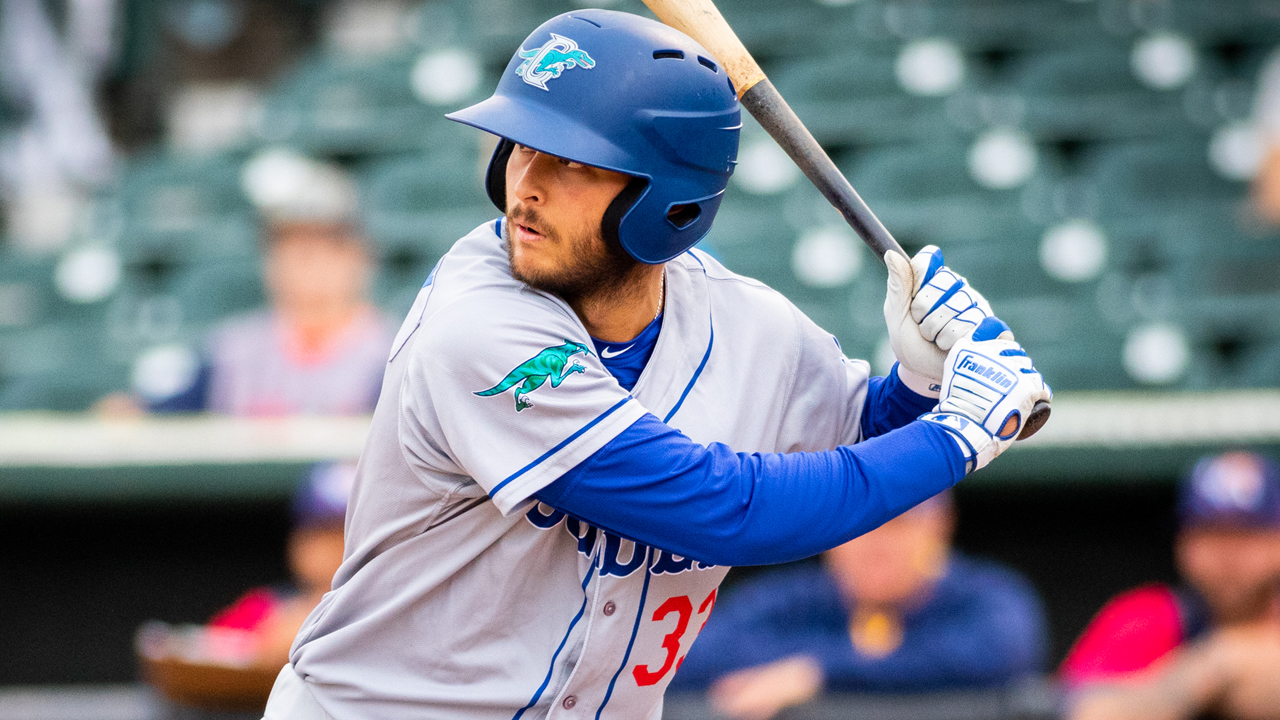 Justin Yurchak went to the Dodgers from the White Sox in a trade for Manny Banuelos last November. (Bobby Stevens/MiLB.com)

On Monday morning, an Ogden Raptor was named Pioneer League Player of the Week. By Monday night, a different one stepped into a starring role.

"Out of all of our guys, and we have a lot who do it well, I think it's incredible to watch [Justin] manage at-bats and because he doesn't chase balls and swings at strikes, he seems to always put himself in good opportunities for success," Ogden hitting coach Seth Conner said. "Actually on the second home run, he was down 0-2 and chased a fastball 0-1 up before that. [Orem reliever Andrew Blake] hung him a slider which he did not miss, but for the most part, he's constantly putting himself in good counts and giving himself good chances to be successful."

Yurchak started the Raptors' big night with a two-run homer to left field in the top of the first inning and singled to right to drive home a run in the second. After a walk in the third, the 22-year-old struck out swinging in the seventh, the only time he was retired on the night.

Yurchak singled up the middle in the eighth before hammering a three-run blast to right in the ninth, the highlight of a five-run final frame for the Raptors.

The big night put the SUNY Binghamton product's slash line through 14 games at .434/.565/.868 with eight multi-hit games, six homers and 20 RBIs. The Dodgers acquired Yurchak from the White Sox in exchange for big league pitcher Manny Banuelos in November.

"He's been fantastic for our club," Conner said. "He's just the ultimate pro. Really, I just think it's that we have a really good organization. Unfortunately, when he came over from the White Sox, we have a really good guy that's in low-A, Dillon Paulson. It's a tough time to be a player in the organization because we have so many good players, but nobody can say a bad thing abut Justin. We all want him to do well and he's obviously putting up the numbers to put himself in an opportunity for that callup.

"He'll manage at-bats and hit at whatever level he's going to go to."

On Monday, Yurchak batted behind leadoff man Andy Pages, coming off a week in which the 18-year-old batted .500/.526/1.278 to earn the Pioneer League's weekly award.

"Our manager Austin Chubb has moved those guys around quite a bit," the hitting coach said. "He's batted leadoff for us, batted in the two-hole tonight. I just think 1-9, our whole lineup, they do a good job. He really sets the table, not only from his early work, but in the game of swinging at good pitches. When you've got a whole lineup who does that, it offers a whole lot of protection for everyone because it makes the pitcher work."

Ogden's lead sat at 3-2 entering the seventh, but the Raptors tallied six runs that frame and five more in the ninth to put the game out of reach.

"It's an incredibly fun dugout," Conner said. "These guys, they're professionals. They're able to execute a gameplan, and obviously hitting's contagious and it rubs off."