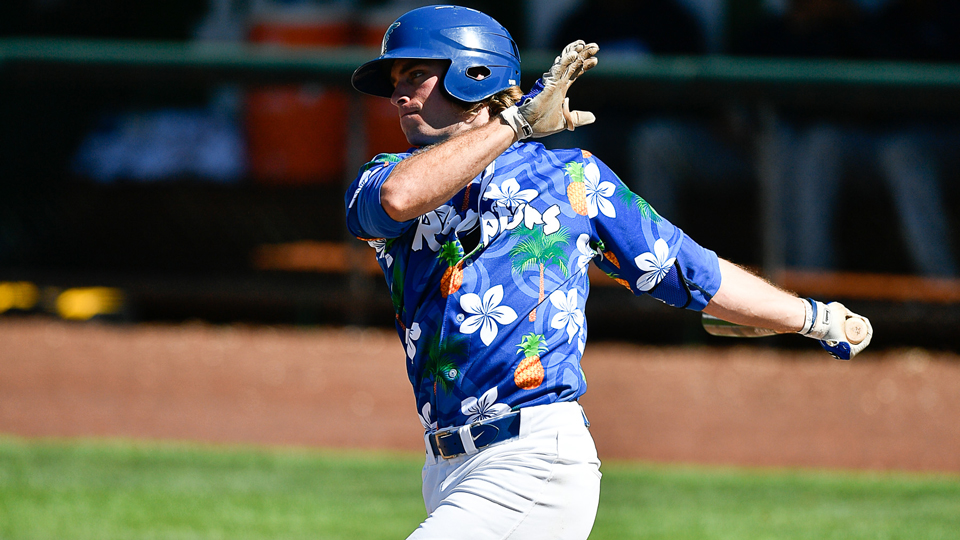 DJ Peters has had at least one hit in 22 of 26 professional games. (Stephen Smith/Four Seam Images via AP Images)

DJ Peters has only played in 26 professional games, but he's got an unforgettable performance under his belt.

Peters went 4-for-4 with two walks, five runs, two RBIs and his third homer in four games to help Rookie-level Ogden lay it on in a 16-7 romp at Missoula on Thursday night.

"Pro ball's been everything I expected it to be and wished of it. Playing on a team like the Ogden Raptors for my first season, it's been unforgettable," he said. "To be honest, it's taught me a lot, and I'm just trying to get up there and 'see ball, hit ball.' I try to stay relaxed and stay within myself and look for a good pitch to drive. Pro ball has treated me well."

From the time the Western Nevada Community College product showed up at the park Thursday, he felt ready for a good game, and his prospects only improved when he led off with an infield hit in Ogden's two-run first inning and swatted an opposite-field homer in the next frame.

"I got some cage work in and I felt very locked in, smooth, comfortable and relaxed," he said. "I was driving the baseball to all parts of the field in batting practice, and when I got on in the first at-bat with the single and then I hit the home run in the second inning, I knew right away I was locked in for the whole game."

It didn't occur to Peters immediately that the dinger was his second in two games and third in four games.

"It didn't until right now," he said. "During the game, I like to take each pitch at a time. Whether it's my first at-bat or I'm 0-for-4 and it's my fifth at-bat, I don't take one pitch for granted. I try to hit the ball hard, and if I hit the ball hard, good things will happen."

He believes that focused mind-set helps him be the kind of hitter that can dig out an infield knock, homer to right field, rope two singles to left and stay patient enough to work two walks in the same game.

"That mentality is something that's very good to have -- not overthinking, 'Oh, what did I do last at-bat?' or thinking ahead to your next at-bats," the native of Glendora, California said. "Personally, I feel like I have to stay within myself in each at-bat, and if you miss a pitch, the next pitch is a brand-new opportunity to be successful."

Still, he wasn't oblivious to the fact that he was in the midst of a remarkable showing.

"Actually, when I got to first [in the ninth inning], the coach [Pedro Guerrero] asked me, 'How many times have you been on base?' I said, 'Six,' and he said, 'That's a hell of a game,'" Peters said. "So I knew I'd been on base six times, but [in the fifth,] they scored three runs and made it a ballgame again. So I was thinking anything could happen. I just wanted to score to give our pitchers more of a cushion. After the game is when it really hit me and I've been really blessed."

Ibandel Isabel scored four times and plated two runs while falling a double shy of the cycle, and Mitchell Hansen went 2-for-4 with four RBIs and a run scored.

Tanner Hill, the D-backs' 26th-round pick this year, was 2-for-4 with his third homer in three games for the Osprey. He had two RBIs, two runs scored and a stolen base.