Barbosa, Smith combined to reach base 9-of-10 times 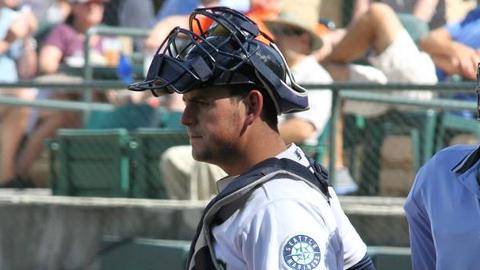 The Pulaski Mariners returned to the Appy League playoffs for the first time since 2010 Saturday night at Bowen Field against the Bluefield Blue Jays and won one of the most thrilling games to date this season, a 10-inning, 9-4 classic.

The M's entered having the best overall Appy League regular season record (41-27), a ½ game better than their first round foe.

In nine regular season contests, the Mariners were victorious in five of them.

Game one of the first round was a roller coaster ride from start to finish.

Both teams began with their respective aces on the mound, but both settled with no-decisions.

M's right-hander Edwin Diaz - who finished the season 5-2 with a 1.43 ERA and was named the Appy League Pitcher of the Year - was given a 1-0 lead in the first inning. Wilton Martinez drove in Aaron Barbosa with a sacrifice fly to put Pulaski in front, but surprisingly, Diaz didn't hold the lead for long.

Blue Jays leadoff hitter DJ Davis singled, stole second, and advanced to third on a Toby DeMello throwing error. Diaz walked Derrick Loveless with one out and brought the RBI leader of the league, Mitch Nay to the plate.

Diaz missed with a slider, and Nay crushed it over the wall in left for a three-run homer. However, the righty eventually settled into a groove, and his offense came to the rescue.

Pulaski rallied against Bluefield southpaw Jairo LaBourt in the third on a two-run double by Jeff Zimmerman, scoring Barbosa and Tyler Smith.

The Mariners regained the lead 4-3 on back-to-back doubles by Kristian Brito and DeMello to start the fourth.

LaBourt left after five innings pitched. The 19-year-old allowed four runs (all earned) on seven hits and a walk. He struck out four.

Diaz pitched into the seventh - only his second time the entire season - and allowed a leadoff single to Matt Dean. Franklin Barreto sacrificed Dean to second, knocking Diaz out of the game after 6 1/3 innings of work. Seattle's No. 14 overall prospect, according to MLB.com, was tagged with four runs (all earned) on five hits and three walks. He struck out five, but had to settle for a no-decision after Leoncio Munoz allowed a two-out RBI single to Jorge Saez which knotted the game, 4-4. Diaz, born in Puerto Rico, benefitted from two nifty inning-ending double play groundouts to keep his pitch count at a premium.

Pulaski's bats scuffled from the seventh through the ninth, and Bluefield appeared to have all the momentum.

With one out in the eighth, Loveless laced a ball to the gap in left-center. Barbosa made a diving attempt, but the ball popped out of his glove and rolled to the fence. Loveless attempted to stretch the double into a triple, but was thrown out on a bang-bang relay throw to third.

Bluefield skipper Dennis Holmberg argued the call and when the eighth ended, he was ejected by home plate umpire Skyler Shown. Holmberg's antics carried into the dugout, where he threw a chair onto the field before departing to the clubhouse.

The Blue Jays had a chance at a walk-off in the ninth, but were unable to deliver in the clutch. Munoz walked the bases loaded with one out and was relieved by Rafael Pineda (1-0). The right-hander out of Texas A&M induced a 6-2 fielder's choice for the second out and moments later got a groundout to Franca, sending the game to extras.

Coming off a 12-inning, 8-7 loss Friday night in Elizabethton, the M's batters ensured this one wouldn't go longer than ten.

Barbosa drew a leadoff walk and Smith followed with a single. On Smith's single, both men advanced an additional 90 feet on Nico Taylor's error in left. Bluefield intentionally walked Zimmerman to load the bases with nobody out and finally got a ball to bounce their way with Martinez at the plate. Martinez hammered a grounder that was ticketed for center field, but the ball hit Smith on his way to third, giving the Blue Jays their first out.

The next man up, Ugueto - who tied the game at seven Friday with the Twins on a 3-2 pitch, two-out, bottom-of-the-ninth home run - had struggled in his playoff debut. Ugueto entered his 10th-inning at-bat 0-for-4 with four strikeouts.

The Pulaski leftfielder tomahawked a two-run single to right, giving the M's a 6-4 lead.

Phil Kish (0-1) uncorked a wild pitch, scoring Martinez from third. DeMello followed with a two-run shot to left-center to finish out the five-run frame.

Luis Pina allowed a two-out double by Dean in the 10th but pitched around it to close out the Blue Jays.

Batters one through seven in the Pulaski lineup each recorded at least one hit. Barbosa continued to be a spark plug atop the order in a 4-for-4 effort. He scored three runs, walked once, and stole a bag. Smith finished 3-for-4 with a double, walk, stolen base, and a run scored. DeMello's two-run home run was part of a 2-for-5, three RBI-performance.

@CheyneReiter This story was not subject to the approval of the National Association of Professional Baseball Leagues or its clubs.