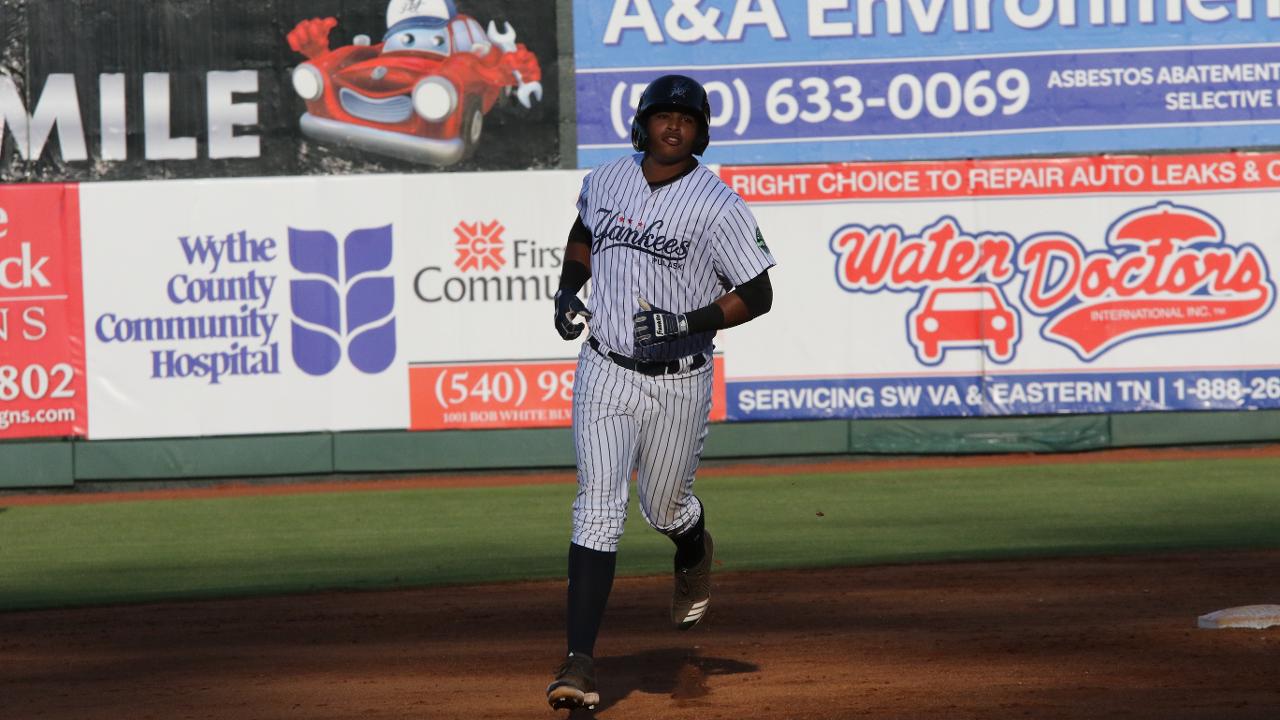 PULASKI, Va - The Pulaski Yankees defeated the visiting Bristol Pirates on Sunday night by a score of 8-6. The Yankees have won the first two games of the four-game set at home and the last three games in a row against the Pirates.

The Yankees took another early lead tonight, as Chad Bell was able to drive in Anthony Volpe who made it on base on a throwing error with one out. A fly ball to right-center field was deep enough to advance Volpe to third before Bell finally delivered the RBI.

Bristol pulled ahead for a brief time in the top of the second inning. The Pirates were able to string together a couple of hits that plated two Pirate runners and score their first runs against the Yankees in more than 19 innings played.

The Yankees weren't trailing for very long though.

After falling behind 0-2 in the count, Nelson B. Alvarez hit a two-run home run to put the Yankees back on top 3-2. Neither team did much of anything in the third inning and the Yanks held on to their one run lead until the bottom of the fourth.

Jake Pries drew a walk to start the inning for Pulaski. Two batters later, Alvarez were hit by a pitch to put two runners on for Antonio Cabello, who singled to left field and scored Pries. Anthony Volpe reached for a second time in the game via a Pirate error but still managed to drive in a run to extend the Yankee lead to 5-2. With Volpe and Cabello safely on board, Bell brought everyone home with a 428 ft. home run over Pierce Ave in right-center field. With his four RBIs tonight, Bell now leads the team with 15 RBIs and has accumulated 12 of those in the last five games.

Yoendrys Gomez made his fifth start of the season tonight and once again showed why he is one of the top prospects in the Yankees organization. He went five innings, struck out four Pirates, gave up five hits and earned his fourth win of the year to improve to 4-1 on the season with a 1.38 ERA.

With Gomez out of the game, Bristol added another two runs in the top of the sixth off Hayden Wesneski who made his sixth appearance of the year. He walked the first batter he faced and then gave up a double two batters later which allowed a run to score from first. A wild pitch moved the runner up to third and he scored on a ground out to the shortstop to cut the lead to 8-4. Wesneski bounced back in the top of the seventh though and was able to strikeout first two batters before getting a ground ball to end the inning.

Bell added to his big night as he singled to center field to lead off the Yankees half of the seventh but wasn't able to cross the plate and the lead remained four runs into the top of the eighth. The Pirates led off the inning with a blooper into left field that ended with the runner standing on second base. A pair of strikeouts by Sean Boyle followed by a highlight reel play from Munoz at second ended the Pirates threat. Munoz was deep in the hole and scooped up a ground ball that looked destined for right field and slid on his knees then delivered a great throw to first base that barely beat the runner to get that third out.

Boyle got the nod to close the game out for the Yankees in the ninth inning and things got a little dicey for Pulaski. Bristol started the inning with a double to left field and the runner advanced to third on a ground out. After a hit batter, another ground ball to Alvarez at first allowed the run to score as Alvarez tried to get the double play. An off target throw from Volpe at short allowed the runner to advance to second base and the Pirates had another runner in scoring position. A second double in the inning allowed one more run to come across for Bristol who found themselves only down two runs and the tying run at the plate with two outs.

Yankees pitching coach Gerardo Cassadiego went out to settle Boyle down and whatever he said must have worked because Boyle got the Pirate batter to pop out to shallow left field and the Yankees earned their fourth straight win.

The Yankees and Pirates will continue this four game series with game three coming tomorrow night from Calfee Park. It'll be Bark In the Park night here and fans are encouraged to bring their dogs to the park to catch all the action alongside them. Gates will open at 4:00 p.m. and first pitch is scheduled for 6:30. To purchase tickets or get more information, please visit www.pulaskiyankees.net or call the box office at 540-980-1070.

The Pulaski Yankees are the Advanced Rookie level affiliate of the New York Yankees playing in the Appalachian League. Pulaski is celebrating its 54th season in the Appalachian League in 2019. Calfee Park has won league championships in 1948, 1969, 1986, 1991 and 2013. Motor Mile Field at Calfee Park opened in 1935 and was renovated for the team's first season as a Yankees affiliate in 2015. For more information, please visit www.pulaskiyankees.net or follow the Pulaski Yankees on social media, @PulaskiYanks (Twitter, Facebook, and Instagram). This story was not subject to the approval of the National Association of Professional Baseball Leagues or its clubs.