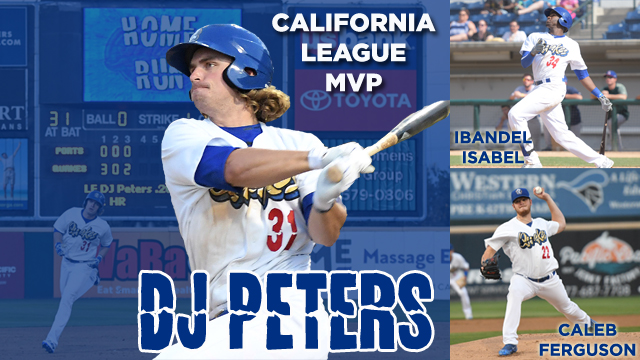 Rancho Cucamonga, CA - The California League has announced its Post-Season Awards and the Rancho Cucamonga Quakes are not just well-represented, but they have the third Quake to be named MVP in franchise history.

Outfielder DJ Peters has been named the California League MVP as well as the Rookie of the Year, an award given to a player that's in his first full-year of professional baseball.

Peters was also named as one of the top three outfielders for the California League Post-Season All-Stars, joining teammate Ibandel Isabel (1B) and pitcher Caleb Ferguson as the three Quakes named to the squad. All three players were also named to the mid-season South Division Cal League All-Star Team.

Isabel, who just set a franchise record this past Friday in Lake Elsinore by driving in eight runs in a win over the Storm, leads the league in round-trippers (26) and is third in the league in runs-batted-in (78). The 21-year-old

Ferguson is currently just a few percentage points behind Modesto's Nick Neidert (2.76) for the league's top Earned Run Average at 2.84. The left-hander has 133 strikeouts (third in the league) and has given up just 108 hits in 117.1 innings, sporting an 8-4 record.

With just 13 games remaining in the regular season, the Quakes currently lead the Second Half South Division Standings and are trying to make the playoffs for a third straight season. They open a six-game home stand on Tuesday evening against the Lake Elsinore Storm at 7:05pm. Tuesday's game is another Healthy RC Recycle Tuesday, as fans that bring ten CRV-eligible bottles and cans to the ticket window will receive a FREE Club Seat Ticket to the game. Tickets are available at rcquakes.com or by calling (909) 481-5000. We hope to see you at LoanMart Field very soon...Go Quakes!