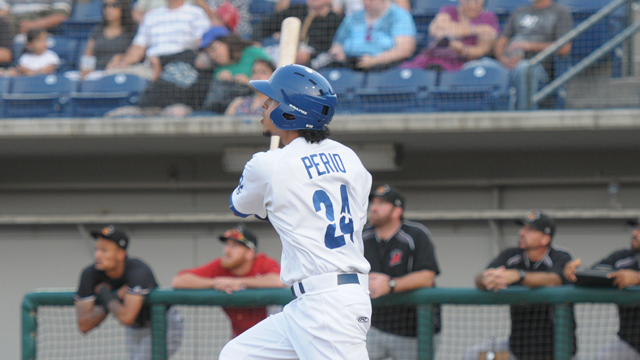 Lancaster, CA-- The Lancaster JetHawks drilled the Rancho Cucamonga Quakes for a second straight night, advancing to the Cal League South Division Finals with a 21-6 victory at The Hangar in Lancaster.

Trailing 3-0 in the third, the JetHawks took the lead for good with six in the third and then put it away with five more in the fourth. The win for the JetHawks on Friday night, gives them a 2-1 series-win and sends them to Adelanto on Saturday, where they'll face the High Desert Mavericks in a best-of-five.

Rancho started Friday much like Thursday, taking the early lead. Erick Mejia walked to open the first inning and later scored on an error, giving Rancho a 1-0 lead over JetHawks' starter Akeem Bostick. Looking for more, the Quakes loaded the bases with one out in the first, but Johan Mieses grounded into a double-play to end the inning.

Rancho tallied two more in the third to take a 3-0 advantage, as Noah Perio had a sac fly and Matt Beaty knocked in a run with an RBI single.

Quakes' starter Adam Bray (0-1) faced the minimum through two innings, but got rocked in the third. Osvaldo Duarte ripped a two-run homer to put the JetHawks on the board, making it 3-2. With two outs and the bases empty, Lancaster used two walks and an infield hit to load the bases for Jason Martin, who responded with the go-ahead grand slam, making it a 6-3 affair.

Brandon Trinkwon opened the fourth with a solo homer, giving the Quakes some momentum. Following the Trinkwon homer, Will Smith and Ariel Sandoval had back-to-back singles, but the Quakes couldn't throw the knock-out punch against Bostick. Mejia and Ahmed struck out back-to-back for the first two outs, before Perio popped up to end the threat.

Brown got charged with another run in the fifth, before Alex Hermeling gave up four more in the sixth. Jason Martin and Kyle Tucker both connected for two-run homers, making it 16-4. Tucker finished the game with seven RBIs.

Bryan Muniz blasted a three-run homer in the seventh off Gavin Pittore, capping their scoring at 19-4.

Rancho got an RBI double from Yusniel Diaz in the ninth, followed by an RBI groundout from Trinkwon, rounding out the scoring.

Bostick (1-0) rebounded nicely after a rocky start, falling one out shy of giving Lancaster seven full innings while retiring 11 straight at one point.

Perio finished the night with two more hits and an RBI, giving him seven hits and six RBIs over the three-game series.

The Quakes congratulate the JetHawks as they move on to face the High Desert Mavericks on Saturday night in the South Division Finals.

The Quakes would also like to thank our fans, our season ticket holders, our partners and sponsors, the players and coaches, as well as our entire staff for a tremendous 2016 season!

Your Rancho Cucamonga Quakes will open the 2017 regular season on the road in Stockton on April 6th, then return to LoanMart Field for the 2017 regular season home opener on Thursday, April 13th, as they host the Lake Elsinore Storm! Season tickets for the 2017 season will soon be on sale by calling (909) 481-5000 as well as online at rcquakes.com. We hope to see you at LoanMart Field very soon … Go Quakes!