The Lehigh Valley IronPigs topped the Red Wings 9-8 in 16 innings Saturday night at Frontier Field, taking advantage of six errors by the Wings. Rochester opens a series against the Buffalo Bisons with a doubleheader on Sunday afternoon; the two, seven-inning game event begins at 4:05 p.m. Popular movie characters Queen Elsa and Princess Anna will be at the game, plus it's the annual Bark in the Park event for dogs and dog owners.

Scott Diamond started on the hill for the Wings, coming in with a 1-1 record and 1.84 ERA in five career games against the IronPigs. In his last two outings against Lehigh, he hasn't allowed an earned run. The IronPigs' starter, Sean O'Sullivan, hasn't had quite the same success when facing the Wings. The right-hander had given up 13 hits and six earned runs in 12 innings against Rochester.

Diamond covered first base to help Nate Hanson retire Grady Sizemore on a hard-hit grounder to open the contest, the first out of a one-two-three half of the inning.

The IronPigs scored first, thanks to a solo home run from clean-up batter Canzler, giving Lehigh Valley a 1-0 lead.

The Wings immediately responded in the bottom of the second inning. Wilkin Ramirez led off the inning with a hard-hit grounder up the middle -- breaking his bat in the process-- and beat out shortstop Edgar Duran's throwing error. Ramirez then put Rochester on the board when Daniel Ortiz tripled to right field. Chris Rahl gave the Wings a 2-1 lead with a sacrifice flyout to center field, scoring Ortiz.

Rochester extended its lead to 3-1 in the third inning. Chris Herrmann ripped a line drive over Canzler's head that rolled to the right field corner and scored James Beresford, who had made it on base with a single.

The IronPigs rallied their way back to 3-2 in the top of the fourth with initial help from Ortiz, who dropped a flyball in the left field corner. That batter, Leandro Castro, then scored on a double by Maikel Franco.

In the bottom of the fourth inning, Rochester's offensive run came to a sudden halt. O'Sullivan struck out three Wings in a row, when he struck out just one through the first three innings.

The Wings did, however, flaunt their defense on numerous occasions with Eric Farris in the spotlight. The center fielder ran down Grady Sizemore's flyball to center field wall for the first out in the top of the fifth inning. It was Farris' second incredible catch in the game; in the third inning, he snagged a ball hit by Sizemore while sprinting toward the wall. Farris caught a routine flyball for the second out, then contributed to an unexpected double play. Baserunner Duran headed for second base after Farris' catch, but instead, Duran was called out for leaving first base early.

Rochester's offense wasn't done for the evening. Hanson and Farris put together doubles to give the Wings a 4-2 lead through five innings.

Diamond retired the first batter in the sixth, before Canzler doubled and Franco homered to tie the score at 4-4. A fielding error by Diamond covering first put Steve Susdorf on base and ended Diamond's night on the mound, with Lester Oliveros taking over. Oliveros knocked down a hard hit ball and threw out Perkins at first base for out number two, then struck out Sebastian Valle to strand the lead run at second.

Diamond worked 5 1/3 innings and allowed six hits, four runs (three earned) and a walk while striking out one. He threw 75 pitches, 50 for strikes.

The IronPigs took advantage of fielding miscues to put runners at the corners with none out in the seventh. Duran reached second on a ball lost in the lights by Ortiz, and Sizemore landed on first base when Hanson couldn't come up with a groundball. Leandro Castro drove home a run on a hit that landed just in front of Farris in shallow center, and a throwing error charged to Beresford allowed another run to score for a 6-4 IronPigs lead.

O'Sullivan allowed five hits and four runs (one earned) in his six innings, walking two and striking out seven. He threw 102 pitches, 63 for strikes; Cesar Jimenez relieved O'Sullivan in the bottom of the seventh. Jimenez caught Hanson looking at a third strike for the first out, but Farris walked and Beresford singled to put the tying runs on base. Franco snagged a groundball by Herrmann and started an around the horn double play to end the threat.

With A.J. Achter on the mound in the eighth, the IronPigs took advantage of the fifth Red Wings error of the night to score another run, before Achter struck out two straight batters.

The Wings put runners at second and third with one out in the eighth, after Bernier lined a ball off the wall in left-center after a single by Ortiz. Pedro Florimon singled to bring home Ortiz, and Bernier scored on a fielder's choice from Rahl that made the score 7-6.

Edgar Ibarra pitched a scoreless ninth inning for the Wings.

Herrmann's opposite field double off Luis Garcia with one out in the ninth gave the Wings one last chance, and Ramirez cashed in the opportunity with a single that scored Herrmann with the tying run. Ortiz reached on a fielder's choice with Ramirez forced out at second, and Garcia walked Bernier then hit Florimon to load the bases with two outs. Rahl flew out to center for the third out, sending the game into extra innings.

Ibarra posted another perfect inning in the 10th, and Ethan Martin replaced Garcia to face the Wings in the bottom of the 10th. Hanson greeted Martin with a single, his third hit of the game. Farris put down a perfect sacrifice bunt to move the potential winning run to second with one out. Beresford worked a full count before grounding out, with Hanson forced to hold at second base. Martin walked Herrmann intentionally to face Ramirez, and Martin struck out Ramirez after another full count to send play to the 11th inning.

Ibarra issued a walk with two out in the 11th, after retiring the first eight batters he faced. When Castro followed with a single, Michael Tonkin was called out of the bullpen to face clean-up hitter Canzler and ended the threat with a popout.

Bernier drew a one-out walk in the 11th, and Martin struck out Florimon for the second out. Rahl slashed single to right field that moved Bernier to third base, but Hanson grounded out and the Wings missed another chance to win the game.

Jeremy Horst took over on the mound to face the Wings in the bottom of the 12th and Farris greeted him with a base hit up the middle. Beresford struck out after a failed bunt attempt, and Horst picked off Farris on a steal attempt for the second out. A flyout by Herrmann concluded the 12th inning.

Ramirez led off the bottom of the 13th inning with a double, and Ortiz moved Ramirez to third with a groundout. Bernier missed on what appeared to be a safety squeeze attempt, with Ramirez thrown out after straying too far from third. Horst struck out Bernier, ending the inning.

Canzler homered off Aaron Thompson with one out in the 14th inning and the IronPigs took the lead. In the bottom of the 14th, Rahl crushed the first pitch from Horst over the wall in left-center, tying the game up at 8-8.

In the 16th, Canzler's two-out single moved Castro to third base. Franco's groundball went through Florimon's legs, putting the IronPigs back on top 9-8. Thompson was ejected by home plate umpire Jon Byrne after going to a 3-0 count on Susdorf, and manager Gene Glynn was also tossed after a lenghth and heated discussion with Byrne. Deolis Guerra came in to pitch for the Wings, replacing Thompson.

The Red Wings were 3-for-17 with runners in scoring position. 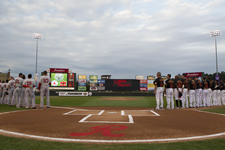 Meet Queen Elsa and Princess Anna in the Red Wings Hall of Fame between 4:05-5 p.m., provided by Enchanted Princess Parties of Rochester... Bark in the Park presented by Pet$aver Super Store. Bring your pooch to the park and enjoy the game together...Knot Hole Kids' Club Game, presented by Excellus BlueCross BlueShield and Messenger Post Media....Spikes' Salsa/Francesco Rinaldi Family Night One Francesco Rinaldi pasta sauce label or Spikes' Salsa label can be redeemed at the box office for a buy-one-get-one free ticket to the game...Kids can Run The Bases with Spikes & Mittsy after the game, presented by The Burger Bar at Wegmans Pittsford....Family Bulletin Day.... Pre-Game Autograph Booth, presented by Hillside Family of Agencies. Meet a different Red Wings player each game, signing free autographs from 6:25 pm-6:45 pm prior to 7:05 pm games; 5:25-5:45 p.m. prior to 6:05 games; 2:55 pm- 3:15 pm prior to 3:35 pm games; 12:25 pm-12:45 pm prior to 1:05 pm games.

2005 - The Wings defeated the Buffalo Bisons 6-3 Tuesday night at Frontier Field thanks to strong pitching and timely hitting. Francisco Liriano (2-0) struck out nine Bisons hitters, and allowed only four hits in seven innings of work. Kevin West finished with two RBI on the night for the Wings, who went four games over .500 for the first time since June 4th and pulled to within six games of the first place Bisons for the first time since June 11th. .New Britain OF Alex Romero and Rochester RHP Travis Bowyer are the Twins Minor League Player Bowyer and Pitcher of the Month for June. Romero, 21, batted .342 (39-114)with 18 runs scored,7 doubles,6 homers and 20 rbi in 30 games with a .596 slugging percentage and a .375 on-base percentage. Bowyer, 23, had a 0.00 ERA (11.1 IP) with 5 saves allowing 4 hits with 7 walks and 11 strikeouts in 11 games, holding opponents to a .108 batting-average-against.

1886 - The city of Buffalo is witness to a hotly contested game between the Bisons and visiting Hamilton. At one point, shortstop Nat Kellogg of Hamilton argues over a decision by umpire John Harrington, and when he doesn't get his way Kellogg decks the ump with a powerful blow to the jaw. Following the orders of several Buffalo shareholders in the crowd, policemen collar the Hamilton shortstop and place him under arrest. Kellogg is marched to the police station, tried in evening court, and released. As a response to the incident International League officials increase the salaries of all umpires. Hamilton and Buffalo went on to finish 4th and 5th respectively in the 1886 IL pennant chase.

1898 - Lizzie (Stroud) Arlington becomes the first woman to play organized baseball when she pitches for Reading in the Eastern League. Some believe she also pitched in Atlantic League exhibition games after being hired by Ed Barrow, the league's president.

1989 - Barry Bonds' homer puts the Pirates outfielder and his dad, Bobby, first on the all-time father and son home run leader list with 408. Previously the Bells (Gus and Buddy) and the Berras (Yogi and Dale) were tied with 407.

2001 - Pirates' skipper Lloyd McClendon is fined $1,000 for walking off the field with first base in the June 26 Brewers game. It's the first time a manager has been fined for 'stealing' a base.