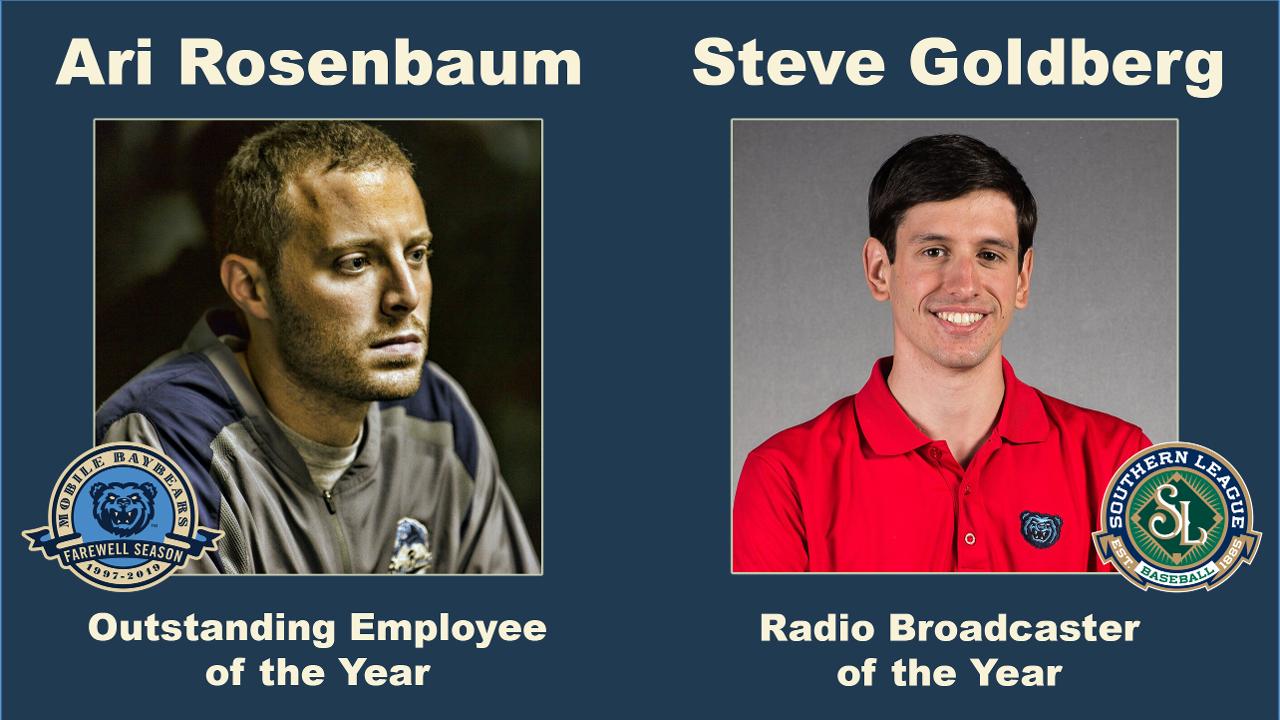 MOBILE, Ala. (September 9, 2019) - The Southern League announced Monday that Ari Rosenbaum and Steve Goldberg of the Mobile BayBears received 2019 Executive Awards. Rosenbaum earned Outstanding Employee of the Year honors for the second time in three seasons, and Goldberg was named the Radio Broadcaster of the Year.

Rosenbaum served as a member of the BayBears front office for 14 seasons and Assistant General Manager for the final five. He remained dedicated to partnerships in the community while striving to ensure the team offered a quality product. Rosenbaum was responsible for in-game operations, including press box staffing and promotions, while overseeing a myriad of departments within the organization. He also helped manage the day-to-day operations during the Farewell Season.

"It is an honor to receive this award again," Rosenbaum said. "There is no way I could ever accept it without acknowledging the staff around me. The entire front office and game day staff are the only reason I could ever be in a position to receive such an award. I owe all my gratitude to the staff that supported me on a daily basis."

Goldberg handled all duties solo as Director of Broadcasting and Media Relations, in addition to other responsibilities as a front office staff member. The 26-year-old recently completed his third season with the BayBears and fifth overall in Minor League Baseball. Goldberg generated publicity for the team both locally and nationally, while acting as a liaison between the front office and clubhouse. He was a frequent contributor to Los Angeles Angels pregame shows on AM 830 KLAA, with a Sunday Minor League Report featuring prospect interviews.

"It is a tremendous honor to receive this award in the final year of BayBears baseball," Goldberg said. "Our entire staff was committed to ensuring a memorable Farewell Season for fans in the city of Mobile, and I believe we delivered that in all aspects. I will forever look back fondly on my time with this organization and the camaraderie with my colleagues in the Southern League."

A 2015 graduate of the University of Missouri, Goldberg worked for the Charleston RiverDogs and the Frisco RoughRiders in subsequent years prior to joining the BayBears. He has also provided play-by-play for the Melbourne Aces of the Australian Baseball League and the Yarmouth-Dennis Red Sox of the Cape Cod Baseball League. During the offseason, Goldberg is the radio voice of University of South Alabama women's basketball and a talent statistician for Westwood One.

Southern League President Lori Webb wished to express her congratulations to Rosenbaum and Goldberg on winning the prestigious awards. "Ari is a hard-working, humble man and has been a true team player. He has especially stepped up to the plate at Hank Aaron Stadium during the BayBears final season, and he is to be commended for his loyalty and professionalism," Webb said. "Additionally, Steve has done a wonderful job in Mobile during his tenure. I know there are great things ahead for this talented broadcaster."