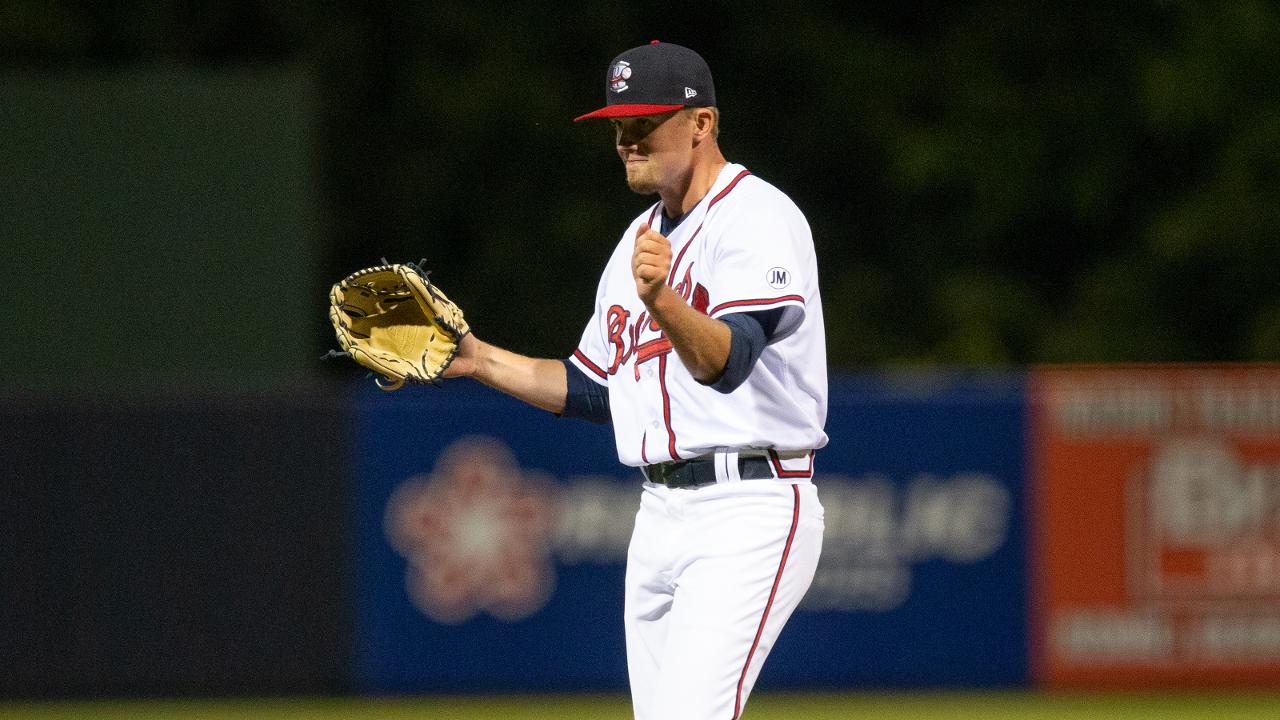 Closer Tanner Lawson celebrates after Rome finishes off the Tourists by a score of 5-1. (Mills Fitzner)

ROME, GA - The Rome Braves knocked off the Asheville Tourists 5-1 in one of their finest efforts of the season on Tuesday at State Mutual Stadium. Rome pitching did not walk a batter. No errors were committed. The Braves lineup compiled five runs and came through in the clutch. It was a crisply played, well-rounded victory to open the series and homestand.

The Braves were playing division rival Asheville for the first time this season and greeted the visitors with an early run in 1st inning. Justin Dean ripped a double into center to open the frame and ended up scoring on a wild pitch. Asheville tied it up 1-1 in the 3rd on a delayed double-steal. The Rome rally that followed in the Bottom of the 3rd inning would put the Braves out front for good.

With Dean again proving to be the catalyst for the offense, the Braves opened the 3rd with five consecutive singles including RBI knocks from Greg Cullen and Trey Harris. Griffin Benson provided an RBI groundout to complete the rally and Rome took a 4-1 advantage. They added another tally in the 6th inning on an RBI double into right field from Ricardo Rodriguez which scored Benson.

While the bats enjoyed a solid evening at the ballpark, the pitching was dominant for Rome. LHP starter Gabriel Noguera turned in his finest performance to date, earning the win for firing 6 innings and allowing only one run on three hits. He struck out four and did not walk a batter. Relievers RHP Luis Mora and LHP Tanner Lawson provided a combined 3 shutout innings with four strikeouts and no walks.

The Rome pitching staff faced only three hitters over the minimum despite going up against one of the South Atlantic League's best offenses.

Tuesday's game is the first of 22 meetings this season between Rome and Asheville.

Rome and Asheville continue their three game series with an Education Day at 10:30 am Wednesday from State Mutual Stadium. Rome will start RHP Jose Olague (3-3, 4.02) while Asheville will counter with LHP Colten Schmidt (0-1, 3.00).