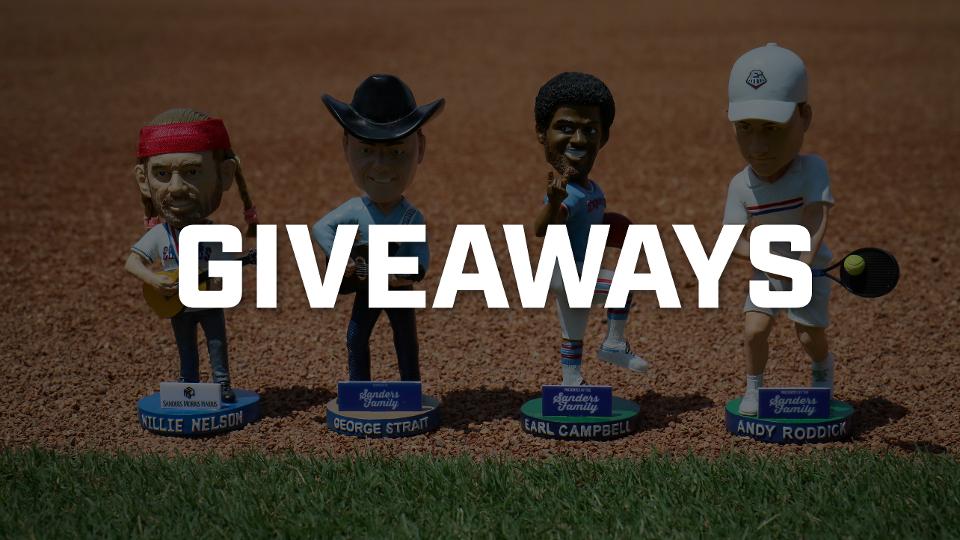 ROUND ROCK, Texas - The 2019 Round Rock Express giveaways are "alright, alright, alright." The new Triple-A affiliate of the Houston Astros revealed their entire lineup of giveaways for the team's upcoming 20th anniversary season on Wednesday morning, with Matthew McConaughey and Nolan Ryan Bobbleheads leading the way.

Opening Day features fans' first opportunity to get their hands on some free swag as the first 2,000 fans through the gates at Dell Diamond will receive a commemorative 20th anniversary coin, presented by Dell. Round Rock kicks off their season on Tuesday, April 9 at 7:05 p.m. against the Nashville Sounds (Texas Rangers affiliate).

Opening Weekend festivities continue as the first 3,000 fans to watch the E-Train face the Memphis Redbirds (St. Louis Cardinals affiliate) on Saturday, April 13 at 6:05 p.m. will receive an Express cap, courtesy of the Nyle Maxwell Family of Dealerships.

The Express will celebrate their return to the Houston Astros family on Saturday, April 27 with the first 5,000 fans at Dell Diamond for the 7:05 p.m. game against the New Orleans Baby Cakes (Miami Marlins affiliate) walking away with a 2019 Team Photo, thanks to our friends at D&L Printing.

The 20th installment of the Nolan Ryan Bobblehead series is set for Saturday, May 11 as Round Rock hosts the Oklahoma City Dodgers (Los Angeles Dodgers affiliate) at 7:05 p.m. Thanks to Whataburger, the first 2,500 fans will receive this year's bobblehead, which features the Hall of Famer decked out in the brand-new Round Rock Express home uniform and ballcap.

The team's annual Baseball Card Set giveaway, presented by WGU Texas, is slated for Saturday, June 1. The first 3,000 fans through the gates will receive a card set complete with their favorite Express players prior to the team's 7:05 p.m. contest against the Iowa Cubs (Chicago Cubs affiliate).

The team is celebrating a 90s staple on Saturday, July 13 with a Fanny Pack giveaway to the first 2,500 fans, thanks to our partner H-E-B. The totally tubular evening features a postgame concert by 90s cover band Zoodust following the 6:05 p.m. contest against the Cubs.

Matthew McConaughey becomes the latest addition to Round Rock's Texas Legends Bobblehead Series on Saturday, August 3. Thanks to the Sanders Family, the first 2,500 fans to the 7:05 p.m. matchup between the Express and Sacramento River Cats (San Francisco Giants affiliate) will walk away with a bobblehead featuring the Austin icon and actor dressed to the nines in a white tuxedo accepting his Academy Award.

Kiddos can gear up for the upcoming school year on Sunday, August 4 as the first 1,500 kids through the gates to see the Express and River Cats at 6:05 p.m. will receive a Backpack, courtesy of A+ Federal Credit Union.

Finally, on Friday, August 23, Budweiser presents a 2020 Round Rock Express Magnet Schedule giveaway for the first 5,000 fans at the ballpark to see the E-Train host the Baby Cakes at 7:05 p.m.

Fans can purchase tickets to each of the nine home games featuring a giveaway online at RRExpress.com, over the phone by calling (512) 255-2255, or in person at the Dell Diamond box office.

Round Rock's jam-packed schedule of theme nights will be announced on Thursday, February 28. Then on Friday, March 1, the team will unveil the nightly promotions that fans can enjoy during each Express home game.

Single game ticket pricing for the 2019 season is as follows:

The Express open their historic 20th anniversary season on the road against the New Orleans Baby Cakes (Miami Marlins affiliate) on Thursday, April 4 before returning to Dell Diamond on Tuesday, April 9 for a five-game series against the Nashville Sounds (Texas Rangers affiliate). Season memberships and flex plan ticket packages are on sale now.

For more information on the Express, visit RRExpress.com or call (512) 255-2255. Keep up with the Express on Facebook, Instagram and Twitter, and join the conversation during our historic 20th anniversary season using #20STROng.