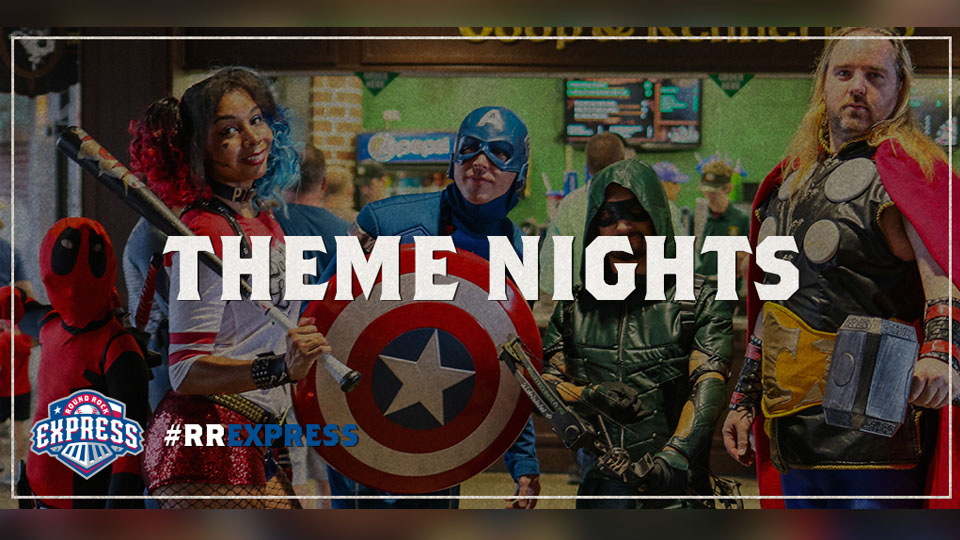 ROUND ROCK, Texas - Puppies, Potter and Princess Leia are joining the Round Rock Express roster this season… or at least it will seem that way as part of a jam-packed schedule of theme nights coming to Dell Diamond in 2018. The inaugural Pints & Pups, the return of Star Wars and Harry Potter Nights and the revamped 90s Nickelodeon Night highlight the slate.

The inaugural Pints & Pups event kicks off the theme night schedule on Thursday, April 19. Fans are invited to bring their four-legged friends to the ballpark while enjoying discounted beer specials as part of The Original Thirsty Thursday, presented by Firetrol Protection Systems.

Namaste at the ballpark on Sunday, April 22 as the Express host Om at the Ballpark, featuring a morning yoga session in the outfield led by a Gold's Gym instructor prior to the 1:05 p.m. game against the Colorado Springs Sky Sox (Milwaukee Brewers affiliate).

Join us as we strike out cancer with Texas Oncology for the annual Cancer Awareness Night on Friday, May 4. There will be opportunities to show signs of support for those currently fighting and honor those who have both battled and treated the disease.

Spike is letting the dogs out at Dell Diamond again on Sunday, May 6 as the Express welcome the return of Bark in the Park, presented by Action Pack Dog Center. Fans are encouraged to bring their furry friends to the 1:05 p.m. game against the Iowa Cubs (Chicago Cubs affiliate) for a fun day at the park.

The Force returns to Dell Diamond on Friday, May 11 for the annual Star Wars Night. Enjoy a pregame lightsaber battle and meet your favorite characters from a galaxy far, far away.

"Sip" back and relax during our special Wine & Nine event Wednesday, May 23, complete with a special ticket package that includes a collapsible Express wine tumbler.

The E-Train will salute our nation's service men and women on Thursday, May 24 with Military Appreciation Night. Each branch of the armed services will be honored during the game, and fans can thank those who serve with special tributes, memorials and recognitions.

The Round Rock Dance Halls look to defend their Battle for the Boot Championship from Wednesday, May 30 to Saturday, June 2 as the archrival Nashville Honky Tonks (Nashville Sounds) come to town. The two American Southern Division rivals kicked off their rivalry series in 2017 with the inaugural Battle for the Boot Championship, which the Dance Halls won with a two-game sweep of the Honky Tonks.

Don't forget to set your away message on Saturday, June 16 as Nickelodeon takes over Dell Diamond for a bigger and better-than-ever installment of 90s Night. The team will don special themed uniforms prior to a postgame concert by 90s party band Zoodust.

Start practicing your fairytale wave as Dell Diamond will once again transform into a royal palace on Monday, June 18 for Princess Night. We partnered with Once Upon a Party to create a princess meet-and-greet that is going to be bigger and better than ever! With princesses abound throughout the ballpark, fans are encouraged to dress up as their favorite storybook character as they look over their magical kingdom.

The Express will pay homage to the popular Netflix series with their first-ever Stranger Things Night on Monday, June 25. Two days later, fans can dress up as their favorite comic book heroes and help defend Dell Diamond from evil on Superhero Night, Wednesday, June 27.

Thanks to our friends at the Nyle Maxwell Family of Dealerships, Win a Used Car Night returns on Saturday, June 30 as a handful of fans will leave the ballpark in a previously-loved ride.

The Spazmatics will perform for the third and final time to celebrate 80s Night on Saturday, July 14. The new wave 80s band will take the centerfield stage following the game as part of the St. David's Summer Concert Series presented by Dell.

Beets, bears and Battlestar Galactica… Don't tell Toby, but on Thursday, July 25, the Express are hosting The Office Tribute Night, to pay homage to the five-year anniversary of the show's final season.

Wingardium Leviosa! The team will celebrate Harry Potter's birthday a day early on Monday, July 30 for the second annual Harry Potter Night. Muggles, witches and wizards alike are all invited to Dell Diamond to celebrate The Boy Who Lived.

Prost! Augtoberfest returns on Thursday, August 9. Food and drink specials will be available throughout the ballpark to celebrate an early start to Oktoberfest.

Dilly Dilly! Dell Diamond will go centuries back in time for the first-ever Renaissance Night on Friday, August 24.

Finally, the season will conclude with Fan Appreciation Night on Thursday, August 30 as the Express celebrate their great fans with player autographs, photo opportunities and much more.

Additionally, the Express will be participating in Minor League Baseball's Copa de la Diversión campaign on five select nights in 2018. Round Rock's branding for the campaign will be revealed during a nationwide announcement by Minor League Baseball on Tuesday, March 20. Copa de la Diversión is a season-long series designed by MiLB to embrace the cultures and values that resonate with local Hispanic/Latino communities.

*dates and events subject to change without notice.