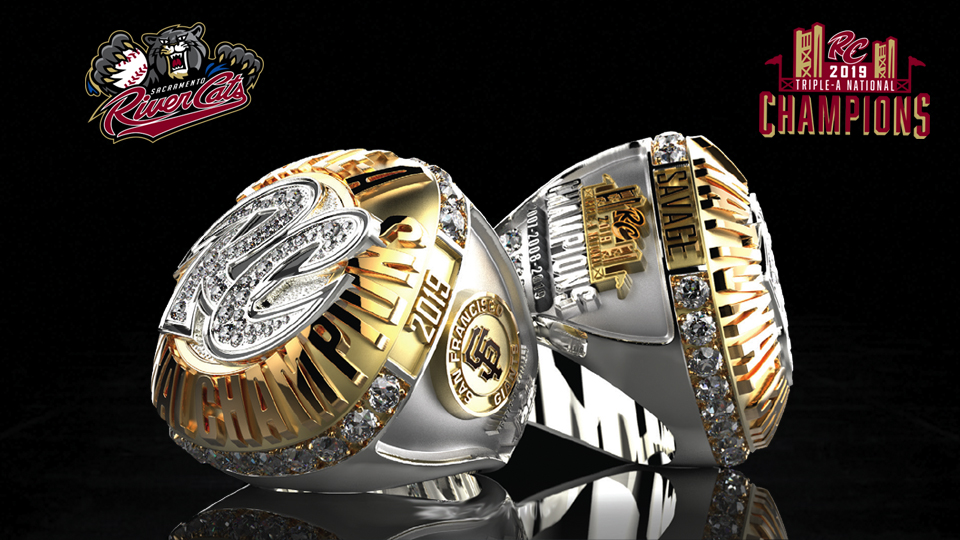 West Sacramento, Calif. - The Sacramento River Cats have released the design and details of the ring commemorating the club's historic 2019 Triple-A Championship. River Cats players and staff from the title-winning team will receive their rings during a special on-field ceremony at Sutter Health Park on Saturday, April 18 before their game against the Reno Aces.

The team will sport a white and yellow gold barrel-style ring that prominently features the River Cats' logo along with several other nods to the organization's history of success, while drawing inspiration from the San Francisco Giants' 2010 World Series Championship ring. As the first franchise to ever win three Triple-A Championships, three clear stones are placed below an engraving of the championship logo on the outside of the left shank, with the recipient's name cut into the top left edge. The Giants logo is featured on the right shank, and the playoff series' records against the Las Vegas Aviators (Oakland Athletics), Round Rock Express (Houston Astros), and Columbus Clippers (Cleveland Indians) are engraved on the interior.

River Cats fans can guarantee a replica version of the Triple-A Championship ring, as well as each of the other 2020 premium giveaway items, by purchasing a Giant Pack for the upcoming season. The fan-favorite Giant Pack includes a Senate level seat for each of the nine biggest River Cats games of 2019 and is available for just $199 (a $580 value). The package is on sale now at rivercats.com.

The Giant Pack will also give fans access to an exclusive pre-sale for the much-anticipated 2020 Exhibition Game against the San Francisco Giants on March 22 at the newly-named Sutter Health Park. At this time, you can secure tickets by purchasing or renewing a membership plan.

The River Cats will officially launch their defense of their Pacific Coast League title on Thursday, April 9, 2020 at Greater Nevada Field in Reno, Nevada, while the home opener is on Tuesday, April 14 at Sutter Health Park in West Sacramento.

Season ticket memberships and packages are available now by calling the River Cats ticket hotline at (916) 371-HITS (4487), emailing tickets@rivercats.com, or visiting rivercats.com. Single-game tickets for the 2020 season will go on sale beginning Sunday, March 1 at the annual Preseason Party at Sutter Health Park.